Opinion: The Ontario Liberals are casting Doug Ford as a malign mix of Rob Ford and Donald Trump. But there is one thing he can learn from both of them 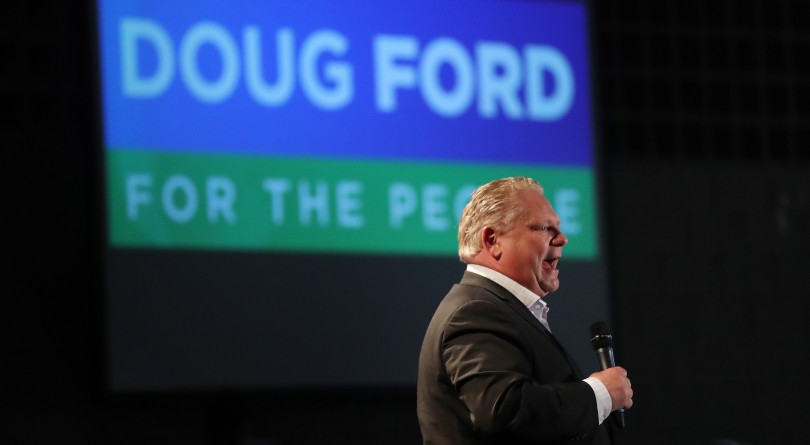 We’re still miles away from the writ, and both the Liberals and Progressive Conservatives in Ontario have already dropped the gloves to trade haymakers.

Feeling her oats after Doug Ford ducked a debate focused on issues affecting the Black community, Premier Kathleen Wynne accused the new PC leader of chicken-feather haberdashery as she challenged him to a further series of debates.

Ford didn’t just accept—he aimed a blow below the equator. “Let’s do the first one outside the jail where the senior Liberal operative will be spending four months,” Ford tweeted tartly, referring to the recently sentenced David Livingston who, in case Wynne has forgotten, was responsible for covering up the tracks of the premier (Dalton McGuinty) who resigned to make way for her.

Round one to Ford, then.

Undeterred, the Liberals have launched an attack site inviting people to glimpse the “real” Doug Ford. The site features quotes from Ford on issues like autism, women, and racism, along with a host of accusations describing how Ford will, and I’m paraphrasing here, burn Ontario to the ground—conveniently ignoring that a province so heavily underwater could not possibly catch fire.

How much of this will resonate with voters is, for now, known only to Liberal focus groups. But if Wynne really is determined to turn Ford into a five-alarm amalgam of the loathsome Donald Trump and Doug’s late brother Rob—the notorious former mayor of Toronto—the Ontario PC leader would do well to lean into the premier’s brickbats and turn them into bouquets.

The Liberals are hoping these insinuations are the fingernails to keep them clung to power, but deploying them also risks highlighting the very thing that got both Rob Ford and Donald Trump elected: the feeling that something is broken—deeply broken—with government.

Given their respective (and relatively quick) descents into fire dumpster-dom, it’s easy to forget Rob Ford was elected with a mandate to “stop the gravy train” at city hall and Trump was tapped to “drain the swamp.” Wynne and the Ontario Liberals, meanwhile, are presiding over a swamp filled with gravy. Ontario is ripe for an insurgency, and Ford knows it.

This is partly the inevitable state of affairs after 15 years in government; nothing lasts forever in a democracy. But it took the deep cynicism of the recent Wynne budget to prove the idea bank is well and truly empty. A dream list of unaffordable pledges tacked onto the back end of a long mandate has been seen for what it is. The people want change.

Spoiled as Ford is for choice, the challenge will be to focus on only one or two key examples of Ontario’s brokenness to make his case. Ford’s attacks mustn’t be disparate or un-focussed, they have to ladder up to one broader charge. Whether it’s that Ontarians can’t afford more Wynne, or that the tired and desperate Liberals can’t be trusted to keep their promises, each brushstroke has to add the picture he’ll be asking Ontarians to reject.

The PC attack also needs to summarized in a pithy sentence Ford can repeat morning, noon, and night. Ford needs to find his version of the “gravy train” and “swamp” mantras and be zen as he pounds the Liberals with it.

Whether that’s a simple “it’s time for a change” or “stop the gravy train part deux, only this time with less crack,” the tagline should ideally also provoke paroxysms of Liberal rage so Grits fling more mud at Ford, which he can then parry back with sadness as he bemoans the Liberals’ desperation.

At some point Ford will also have to replace Patrick Brown’s “The People’s Guarantee” with his own program, but one suspects that will be late in coming and low on ambition—the wager being that Wynne needs to prove that she deserves to stay more than Ford must prove he deserves to replace her.

This isn’t to say Ford can afford to leave the cupboard entirely bare. If Ford is smart, he’ll lean on his team of prospective MPPs to convey more substance. The fact that talented women like Christine Elliott and Caroline Mulroney are running under his banner after missing their chance to lead is proof the PCs are more than one (marmite) man band. There are other young politicians, like my former colleague Stephen Lecce, who are ready to bring their tremendous energy to government.

Ford needs to adopt the biggest lesson from the same two leaders his opponents are vilifying him as, and then, somewhat ironically, lead a mirror image campaign to Justin Trudeau’s 2015 federal win—be a relentless advocate for change and his chosen mantra, while showcasing the team of adults that will help him deliver it.