Opinion: With an offhand flip-flop on Greenbelt development, the Ontario PC leader looks to be trying on a version of the 'People's Guarantee'—to the point of kowtowing 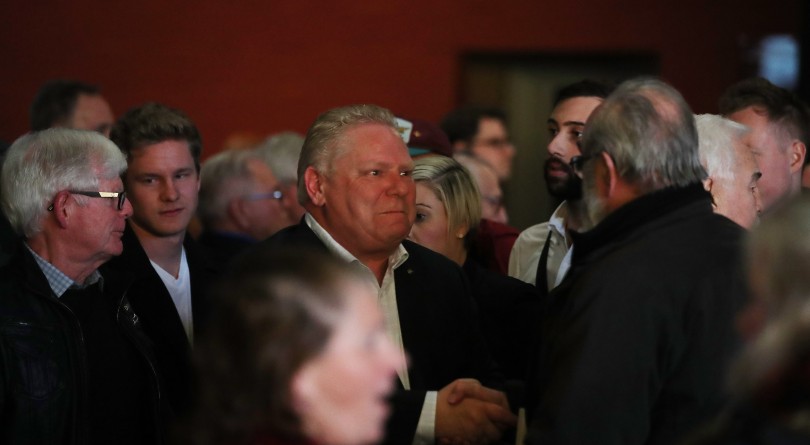 If you’re going to swallow yourself whole, it helps to have a big mouth.

Doug Ford opened wide on May 1 to gobble down a promise to cement the Greenbelt, belched out from out of nowhere only the day before. As far as feats of digestive excellence go, Ford’s efforts ranked somewhere between Takeru Kobayashi’s explorations with hot dogs and the early pretzel oeuvre of George W. Bush.

To be fair to Ontario’s (likely) next premier, the issue didn’t exactly come out of nowhere. As the Liberals helpfully pointed out by releasing the video, it was a promise Ford made to a room full of supporters this past February. It was the public airing of Ford’s private views that killed them stone-dead.

Being an optimist, I like to think of Ford’s gambit as “The People’s Guarantee,” only this time with more people’s guaranteeing. You don’t like it, Ford won’t do it. Brought to its logical conclusion, however, this approach will end with Ford changing his name to Kathleen McGuinty following a clever Liberal campaign on social media in 2019.

But if the Greenbelt nonsense wasn’t all a mistake—if this genuinely is to be the new approach—it should at least be marketed properly. If the “People’s Guarantee” smacks too much of the ancien régime, how about branding the idea as “ReFordrendums?” Or perhaps the PCs could try government by call-in cable TV show? It could be called “Ford Nation.” What’s that you say? Governing through government is fine by you? Okay, then, the people have spoken.

There are reasons politicians don’t go to the well of the people too often. For one, most people are too busy to follow along and expect the people they elect to make informed decisions on their behalf—that whole “representative democracy” thing. Throwing it to the people can be a roll of the dice; just ask David Cameron what giving a straight question to a complicated problem gets you. And then there’s the question of medicine, as in, the “people” don’t like taking it. If Ford doesn’t think leadership matters on tough files he should get out of the kitchen. If it’s really all about the people, let’s just turn over the keys to Change.org and head to the bar to let the bartender decide what we’re going to have.

What was Ford even thinking? A man as close to the people as he purports to be should know not to grab the mother of all NIMBY third-rails in Ontario politics. The Greenbelt is the shield Tories use to deflect criticism of their poor environmental bonafides, not a sword used to pierce their own guts.

Moreover, you don’t casually pick a fight with a special interest group that receives taxpayer dollars by the barrel. The Greenbelt has its own capital-F Foundation, for God’s sake. Even the Ontario Home Builders’ Association doesn’t want to build on the bloody Greenbelt—there isn’t a need for it. If Ford wants to see a housing and Greenbelt problem, he can fly over to London, the city where I would have to write another 2,000 columns just to afford a one-bedroom basement flat at the arse end of the Jubilee Line in the neighbourhood where everybody gets stabbed all of the time.

Slaying sacred political animals like the Greenbelt requires strategic thought and a long-term plan, not one instance of shooting from the lip. With the Liberals flailing after a long run in government, Ford will get more mileage out of publicly sharpening his knives than he will telling the voter what he’s going to cut—or in this case, where he’s going to build.

The Liberals might have won the day, but they shouldn’t get too smug over Ford’s misery on housing. They’re going to need another 1,021,038 landmines of the Greenbelt’s calibre to stop Ford from assuming office, so poor is their record. This early misfire should also scare Ford into the arms of a more scripted campaign.

Having a proper platform would give Ford a safe path to follow and help reduce the chances of blowing himself up. But picking policies through public focus-grouping in an election is a sub-optimal approach.

“Increasing the supply of affordable housing in the GTA while protecting the Greenbelt in its entirety,” we now know the PC platform will say. If only Ford didn’t first have to swallow himself whole to have the platform read that way.

It’s time to find a script to stick to, and put Ford’s big mouth to better use.