Tabatha Southey: Ontario’s cellphone ban is the 'Buck-a-Beer' of education policy. All catchphrase. No cattle. 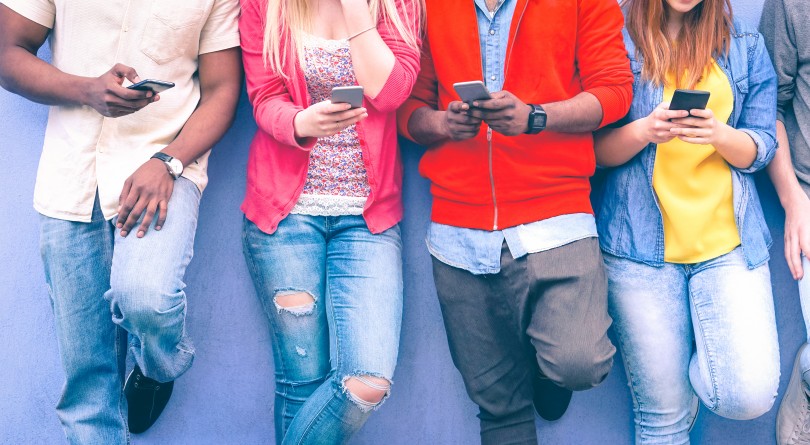 Teenagers who may not let a cellphone ban stop them from doing what they're doing here. (Shutterstock)

What’s changing is that students in Ontario schools will soon be expressly forbidden from bringing cellphones into classrooms. Wait, sorry, that’s not quite right either; plenty of students were already forbidden to do that by their schools or individual teachers. So let’s try this one more time: soon, students in Ontario will be forbidden from bringing cellphones into classrooms by the province.

Except teachers will be permitted to use cellphones as part of their lesson plans, and cellphones used for medical reasons or by students with special needs will still be allowed. In some ways this is less a “cellphone ban” and more of a “cellphone distraction.”

Indeed, Doug Ford chimed in on Twitter, saying, “Smartphones have become a huge distraction in classrooms,” almost as if he were thinking, “How can we make them a distraction somewhere else?” Cellphones are “making it impossible for students to learn effectively,” continued the premier. “We conducted the most extensive education consultations in Ontario’s history, and 97 per cent of respondents agree—it’s time to put the education of our students first.”

Doug Ford, it seems, is a much bigger fan of public consultation when the public isn’t rejecting his plan to make Ontario’s sex-ed curriculum more palatable to any time-travelling Victorians touring the province. It’s safe to say there will be no concern that this cellphone question was “flooded” by “certain groups.”

“Certain groups” of people, the kind of who want the province to stick with a modern and inclusive sex-ed curriculum, apparently stayed in their certain homes at cellphone deciding time. I feel we were meant to believe these houses spin on chicken feet and make a screeching sound.

Ontario Education Minister Lisa Thompson said on Tuesday that she would be “making a formal announcement in the near future.” As near as I can tell, that formal announcement came on Friday, held at the Ontario Science Centre, although it contained few specifics on the implementation of a cellphone phantom-ban. I guess what we saw on Tuesday was just a super-urgent casual announcement, kind of like when you shout, “Hey, look over there!” after you pour water on a grease fire, and the cellphone “ban” does appear to be a win for this Conservative government.

People have not, at press time, come forward to say, “No, we never actually said we think you should ban cellphones in classrooms, you made that up,” and no non-profit has complained that an Ontario minister threatened them with “four long years” and an official statement declaring them “self-interested” if they didn’t play along with the cellphone ban. Thousands of parents have not so far protested that they were not consulted on this phone policy and that expert knowledge was discounted in its making. And it’s not as if this new policy will be implemented in a matter or weeks. Banning cellphones won’t cause massive upheaval, devastation even, in the lives of families with autistic children by pulling the treatment these children need to thrive and that many have waited a long time for right out from under them.

No, Ontario’s cellphone consensus seems to be as solid as it is rare, precious and powerful, and I’m almost surprised the Ford government pulled it out of their hat to let us feast our eyes upon it now. To what to do we owe the honour?

Are we meant to gaze upon this glorious consensus-backed ban instead of casting our eyes back to Doug Ford’s long-time buddy, Toronto Police Supt. Ron Taverner, who has just withdrawn his name from consideration to be the next commissioner of the Ontario Provincial Police? He made this move under a cloud so big you’d think an Ontario franchise of Eyjafjallajökull had just erupted. And after the requirements of the job seemed to have been lowered so he could meet them, too. That’s gratitude for you.

Look, all Doug Ford wanted to do was pick up a used police force and customize it.  Speaking of customization, a lawsuit filed by lawyers for now-former OPP deputy commissioner Brad Blair requesting that the court force the province’s ombudsman to investigate Tavener’s appointment included an estimate for kitting out a van for Mr Ford. The dream van was to have a Blu-ray player, a leather power reclining sofa bench, four swivel chairs and desks and a 32-inch television for a price of $50,696. HST included, actual van not.

READ MORE: Why Doug Ford and Jason Kenney are treating the media as enemies

I say “now-former” because Blair was suddenly fired last week, but I think we know that that 32-inch television is not the screen the Ford Government wants us to be thinking about right now. Now is the time to think of the children.

No, no, no! Not those children, not the ones the Minister of Social Services assures us only need more screen time. Stop looking at them, and really, stop protesting on their behalf. Look instead upon the entirely noble and certainly attention-getting creature that is the Ontario-wide School Cellphone Ban!

This cellphone ban was a rare beast even before all those people agreed it was a fine idea. After all, banning cellphones in schools was an actual Doug Ford campaign promise. Why, “I will get those pesky kids off their damn phones” is close to being his only actual campaign promise. The Ontario Conservatives did not really have a “campaign platform” so much as they had a “campaign coaster.” They offered voters something just barely large enough for them to put their buck-a-beer on.

Cheap beer, cheap gas, no one will talk about climate change, no gay stuff. Doug Ford’s appeal could be best summed up as this: “Make me premier, and I’ll make Ontario just a bit more like it was when you were young,” and that’s how we all found ourselves plunging deep into Doug Ford’s hot tub time machine.

A cellphone ban is of course part of this. It’s not only that the move is retro, it’s that—while the issue of cellphone use in class is real—the Ontario Conservatives are again on brand here, offering a simple pseudo-solution to a complex problem. This device ban is the “Buck a Beer,” the “#ClearTheWaitlist,” the, dare I say, “Cut the Waist” of education policy. All catchphrase. No cattle.

There is no question that cellphones can be a distraction and yes, I can well believe that most people think it’s not a good idea to allow students to use them in class. And yet tech also has a role to play in modern education—open a Google doc and discuss among yourselves—and teachers, schools and entire school boards are already hard at work determining what that role should be.

Notably, Ontario’s own Toronto District School Board already decided, after four years of trying, that actually enforcing a top-down cellphone ban is practically impossible and has returned to allowing teachers to decide what is best for their classes. Teachers are, after all, the experts.

Teachers, like parents, know, or learn fast, that they have to pick their battles and that children need tools and support as they set about learning to manage the distractions and temptations that will forever come their way. Teaching children that, ultimately, they are the ones responsible for identifying and creating environments in which they can work productively is part of what we entrust teachers to do. Putting teachers in the role of the cellphone cop, out to confiscate students’ personal property by provincial decree, does not make their job easier. Giving them even more students to police, not teach, as the government also did this week, increasing high school average class size requirements from 22 to 28 (but, keep your eyes on the cellphones!), doesn’t help either.

Yes, a London School of Economics study in 2015 found that when high schools banned phones, low-performing students performed better: “Students in the lowest quartile of prior achievement gain 14.23 per cent of a standard deviation, whilst students in the top quartile are neither positively nor negatively affected by a phone ban.” This is routinely reported as a 14.23 per cent increase in exam scores. It is not, and the bit about “there are no significant gains in student performance if a ban is not widely complied with” is mostly left out.

Adults might want to check their own work before handing it in and besides, shouldn’t  we use this kind of information, accurately presented, to teach children about how to responsibly use electronic devices instead of hauling out stats and accusations, willy-nilly, to advocate for a one-size-fits-all-classes ban on those devices?

Lord knows what distractions Doug “Back to the ’80s” Ford will offer Ontario next week. My bet’s on “To hell with school autonomy, mandatory Stairway to Heaven at the end of every dance!” Soon there will be Ontario roller skating scholarships and university funding will be tied to student tolerance for Kokomo played on a loop on campus: you kids make so much as one protest sign, you can say goodbye to the anthropology department. Cellphones will still be out, but dealers can have pagers again. Ontario is Open for Business.