Enough is enough—time for a national response to COVID

Scott Gilmore: Trudeau must stop scolding premiers from the sidelines. He’s the fire chief, and it's time to put out the fire. 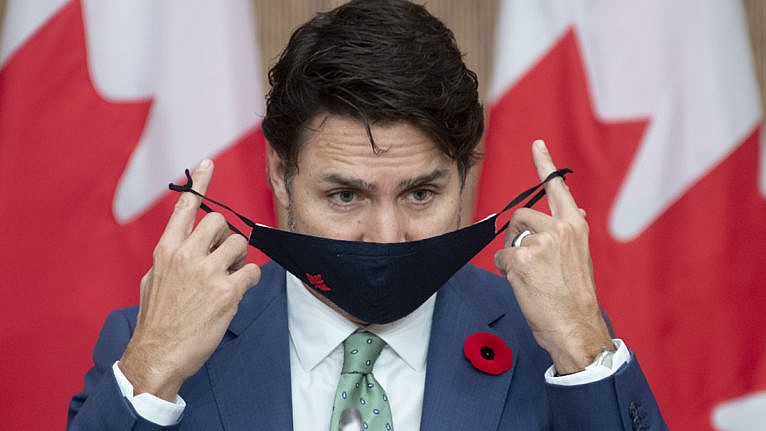 Trudeau puts on his mask after speaking during a news conference in Ottawa on Nov. 6, 2020 (CP/Adrian Wyld)

The COVID vaccine is here, we’re all saved. Except, not yet. And not all of us.

The drug companies need to complete their trials. Then billions of doses need to be manufactured, and then the general public will only get vaccinated after front line workers are taken care of. According to informed commentators, if we are lucky, we will get access to it in “late 2021.”

If that means September, that is another 10 months to manage through the pandemic. And, at the current rates of infection, that means another 12 million Canadians will get the disease, and 13,500 more of us will die.

But, it will quite likely be even worse than that. Canada’s infection rates are hitting all-time highs. Forty-five Canadians were killed by the coronavirus yesterday. Tomorrow it will be more. And there is no sign that we are “bending the curve.”

In one important way, pandemics are unlike any other policy challenge that a government might face. The measurement of success is very stark and obvious. Either the number of infected and dead goes up, or it goes down. If you are the leader in charge you can’t say, “Sure, more people are dying now than when I implemented our policies, but it’s a different type of death.”

In that regard, Canadian leaders have completely failed us. We now have over 10,600 dead. Germany has suffered half the number of deaths per capita as we have. We have eight times more dead per capita than Australia; 28 times more than South Korea; 50 times more than New Zealand.

Why are we doing so badly? You don’t need a room full of epidemiologists to puzzle this out. Our Prime Minister mostly side-stepped responsibility and decided 10 different provincial premiers should manage a national pandemic. They in turn passed on responsibility to mayors and local health authorities. The result has been incompetence, chaos and death, with a Prime Minister who has decided it’s all someone else’s problem.

Imagine an apartment building is on fire, and the fire chief pulls up on his red truck, gets out, and with a megaphone encourages everyone inside to take the fire seriously and quickly put it out. He even offers them money to buy hoses, and all the water they need from the hydrant.

That has been Prime Minister Justin Trudeau’s strategy from the beginning. And now that the entire apartment is ablaze, he is decided more needs to be done. So today our national leader “implored” mayors and premiers to “do the right thing—act now to protect public health.” He helpfully added, “If you think something is missing in the support we’re offering for your citizens, tell us”—looking up to the people in the burning building, pointing to all the hoses on the back of his truck.

First, Prime Minister, these are your citizens too. And another 13,000 of your citizens are likely to die if you don’t step up and act like a national leader. Public health is under provincial jurisdiction, but in the midst of the biggest national crisis we’ve faced in 80 years, our federal government has a forceful argument that it needs to take control and implement a national response.

First, immediately and quickly convene the nation’s health ministers (not the premiers), and agree on a unified response. This is a national crisis, not a series of provincial pandemics. The mix-and-match policies being implemented across the country, triggered at different levels, applied in different ways, and communicated (or not) in different terms is failing. One thing Germany, South Korea and New Zealand have in common is that these nations responded with a unified national response. And, if a premier (looking at you Jason Kenney) won’t cooperate, then put up a provincial quarantine and offer to throw them as many fire hoses as they need.

Second, prioritize testing and tracing. It’s absurd that we are eight months in and still don’t have this worked out. We have millions of newly unemployed Canadians, and we have a desperate need for manpower to help track down infections. Why have we not hired, trained and mobilized some of them into a response corps?

Third, acknowledge that there is a trade-off between saving lives and saving the economy. Right now provincial governments are bungling the pandemic response in order to keep as many small businesses open as possible. Ironically, this is making the medium-term prospects for these companies even bleaker. But, it doesn’t have to be one or the other. There are smart ways to allow businesses to stay open while also keeping them safe. We can look to Germany, New York, and even to some parts of Canada to find examples and best practices.

Finally, a national response needs to be actually understood by Canadians. Right now the messaging from premiers, mayors and health officials is never on the same page, if it is being communicated at all. I live in Ottawa. I read the local paper and listen to the local radio station. I am paying attention. And I can honestly tell you I have no idea what our current response is supposed to be.

If I look online I need to start at the City of Ottawa website, which tells me the current status is orange. It then takes me to a provincial portal, which instructs me to download a 19 page PDF. I spent 10 minutes with it and while I learned that strip clubs are now closed and bingo parlours cannot serve alcohol after 10 pm, I am still not sure if I am supposed to wear a mask when entering a business. (Is that an indoor public space? I assume so. I don’t know.)

Across the country there should be three stages of response: green, yellow and red. A region is moved in or out of a stage based on a specific rate of infection, so everyone knows in advance if a lockdown is coming and, be they a business or a citizen, they can take the necessary precautions to prepare. The response for those three stages needs to be understood, and simplified. If no indoor groups over 10 are allowed that means no indoor groups over 10. Period. No exceptions for a fitness centre or a church. No confusing loopholes. No PDFs.

All of this requires one thing, a fire chief who is putting out the fire. Trudeau needs to step up and take control. He can no longer sit outside and tsk tsk at the way the premiers and mayors are failing to put out the fire. You wanted to be PM? This is what a national leader does. He leads.