Paul Wells: The difference between the personality O’Toole presented to Conservative members in the leadership race and the personality he’s presenting to Canadians as a federal election approaches is spectacular 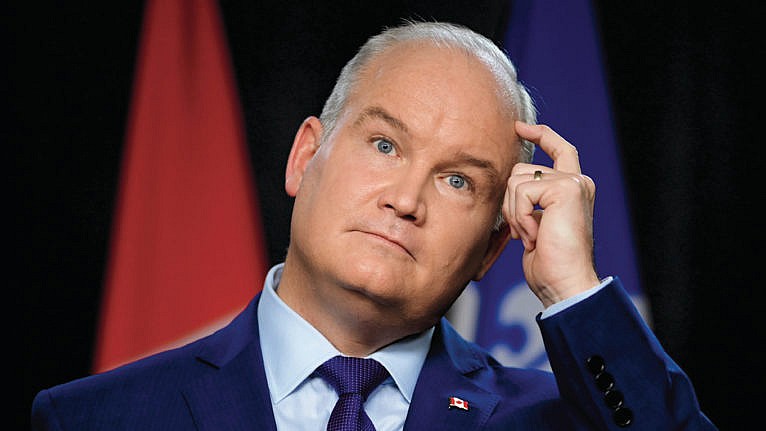 These days the federal Conservative party’s website is so scrupulously bland I wondered at first whether I was in the right place.

The opposition party’s website used to be one-stop shopping for messages designed to provoke Conservative supporters’ outrage and collect their donations. Two years ago the website’s main page contained panels marked ILLEGAL BORDER CROSSERS and SAY NO TO THE UN GLOBAL COMPACT FOR MIGRATION! A year earlier, in early 2018, neighbouring buttons said SIGN: TRUDEAU MUST TESTIFY and SIGN: JUSTIN TRUDEAU MUST RESIGN. (If he resigned, would he still have to testify?)

Before the 2015 election, when the NDP was briefly leading in the polls, Conservative visitors were invited to read about “Mulcair’s NDP team” via a panel that seemed to be illustrated with an army of zombies. In 2008 the main CPC page had no fewer than eight separate references to then-Liberal leader Stéphane Dion’s “tax trick.”

Nowadays the site could almost be an insurance company’s. There are photos of the leader—that’s Erin O’Toole, if you hadn’t heard—and exhortations to donate, alongside cheerful messages about recent donations. There’s a link to a “Statement from Conservative Leader Erin O’Toole on Keystone XL,” where once there would surely have been something about TRUDEAU’S PIPELINE FAILURE or some such. And that’s about it.

Today’s Conservative party, from its leader on down, is on its absolutely best behaviour. The party gained votes and seats in 2019, and wound up with about 200,000 more votes nationwide than Trudeau’s Liberals. It responded by forcing Andrew Scheer to resign as leader. This might seem an odd reward for improving the party’s performance. But while Scheer had run up huge vote majorities in ridings across Alberta and Saskatchewan, he’d absolutely hit a wall in Ontario, where the Liberals went from 80 seats in 2015 all the way down to . . . 79 in 2019. In most of the seats they held, the Liberals increased their local majority. So they’ll be harder to dislodge next time.

O’Toole represents an attempt to put a more Ontario-friendly face forward, which means a blander face. Ontario was the seat of power for some of the least exciting people in Canadian political history: Bill Davis, Mike Harris, and at the federal level, Jean Chrétien and, when things were going right for him, Stephen Harper. Harper campaigned alongside Bill Davis in 2006 and alongside the doomed, self-destructive Toronto mayor Rob Ford in 2015, which tells you all you need to know about how he began winning and why he ended up losing.

Scheer offered too many surprises to a province that hates surprises. He had a surprise extra citizenship, and he was surprisingly unable to account for his whereabouts before he entered politics or offer views on large areas of public policy. So even though the 2019 campaign revealed that Trudeau’s favourite party trick for many years was to wear full-body blackface, potential swing voters in Ontario decided the alternative was too spicy.

O’Toole’s goal is to be blandly reassuring. He’s only got the one citizenship, thanks, and he was riding around in helicopters doing useful things when Trudeau was forcing people at parties to decide how to react to him. If a change of leaders were all it took to finish off the Liberals, O’Toole might be the person to do it. But there is no reason to believe a change of leaders is all it takes.

Honestly, the difference between the personality O’Toole presented to Conservative members in the leadership race and the personality he’s presenting to Canadians as a federal election approaches is spectacular. He was the True Blue candidate who’d Take Canada Back. When Peter MacKay tried to get social-conservative gadfly Derek Sloan kicked out of the Conservative caucus, O’Toole blocked the effort and ran online ads to brag about it. Months later, as leader, he led the successful effort to get Sloan thrown out.

In some ways this is classic leadership politics: play to the activist base to win the leadership, then pivot to the centre. One problem is that absolutely everyone sees you doing it. A bigger problem may be that the True Blue Take Canada Back party O’Toole won is still there.

Electoral calculus may tend to moderate the federal Conservatives, but in a lot of ways, events since O’Toole won the leadership in August have tended to radicalize them. The biggest event was Joe Biden’s election to the U.S. presidency, which was portrayed by thousands of social media accounts and a large part of the commentary on Fox News as Donald Trump’s re-election. Trump and many of his supporters have never admitted he lost. They campaigned aggressively to undo the legitimate election returns. When dozens of half-baked court challenges collapsed under their own absurdity, the Trump minions turned to the street. A mob stormed Capitol Hill on Jan. 6, with outbreaks of violence and loss of life. This could have been a terrible clarifying moment, but a lot of people who denied Biden’s victory before Jan. 6 have continued to deny Trump’s culpability since. And those groups interact in complex ways with various populations that are deep into COVID-19 denialism—the masks-don’t-work, vaccines-are-a-plot crew.

It’s been interesting watching the O’Toole Conservatives try to interact with the Canadian wing of the Trump and vaccine denialists. O’Toole tweeted his congratulations to Biden and Kamala Harris on Nov. 7. (He didn’t specify what he was congratulating them for, and I’ll bet you dollars to doughnuts that was intentional.) The tweet drew hundreds of angry replies from accounts claiming to represent the Conservative base. “I’m writing you off based on this tweet. Have always voted Conservative but you are not fit to be Canada’s PM,” one account said. “If their values are Conservative values I’m no longer a Conservative!” said another.

The same thing happened to O’Toole’s deputy leader Candice Bergen. She maintained a decorous silence for a few days after an undated photo of her wearing a Make America Great Again cap surfaced. Then she tweeted out the official Conservative condemnation of the Capitol Hill riot. “I strongly condemn the violence incited by outgoing President Trump yesterday in and around the Capitol Building.”

Many, many Twitter accounts were unimpressed. “Trump didn’t incite violence, this would be a statement I would expect from Trudeau and his sheep,” one said. “The CCP has sold its soul to the Globalists,” another said.

There’s no way of knowing how many of these accounts reflect real people. Twitter’s a mess. So’s Facebook, so I don’t know what to make of the person who responded to a Jan. 27 video on Conservative MP Cheryl Gallant’s Facebook page by posting this comment: “Trudeau has a better chance of winning at the moment, he’s slowly hanging himself . . . Economically Canada is ready to explode, the great reset is upon us, only way to stop it is with an assassination.” I do note that, while Gallant’s page says its administrators “reserve the right to delete any inappropriate submissions,” that one was still online four days after it was posted.

I don’t think this bilge comes anywhere close to representing the mainstream of thought in the Conservative Party of Canada. It can still mean at least two kinds of trouble for O’Toole.

First, how many of the party’s candidates for an election that could come this year have spent the last six months posting U.S. election denialism, or vaccine denialism, or COVID-19 conspiracy theories? I promise you a team of Liberal party researchers has been logging every instance they can find. The first half of the 2019 campaign featured the fruits of those researchers’ efforts: every time Scheer landed somewhere, he faced questions about his candidates’ statements. Or his own. That opposition-research effort will certainly be more ambitious next time, and I doubt it will find less to feed on.

Second, a leader who’s trying to grab the centre might come to seem like an outsider to parts of his own party. A Jan. 27 poll from the non-profit Angus Reid Institute asked respondents who they’d vote for, and then it asked them what they thought of various leaders. This produces a measure of what party supporters think of their own preferred party’s leader. Jagmeet Singh is sitting pretty with NDP supporters, 89 per cent of whom view him favourably. Trudeau is supported by 85 per cent of Liberal supporters. O’Toole is viewed favourably by only 63 per cent of Conservative voters. That’s a serious problem of motivation, enthusiasm, party unity.

From the sidelines, it’s easy for me to say what O’Toole needs to do: run like hell for the centre and actively hope the Trump Republican elements of his party give up on him. But a strategy isn’t guaranteed success even if it’s obvious. If O’Toole can’t make his party’s centrist face persuasive to voters who haven’t been voting Conservative lately, while those who have been voting Conservative decide to sit on their hands, he’s in a pickle.

This article appears in print in the March 2021 issue of Maclean’s magazine with the headline, “True blue who?” Subscribe to the monthly print magazine here.