Ben Woodfinden: The seemingly unstoppable ascendance of nativist and populist parties has set up a renewed crisis of confidence in Europe’s future 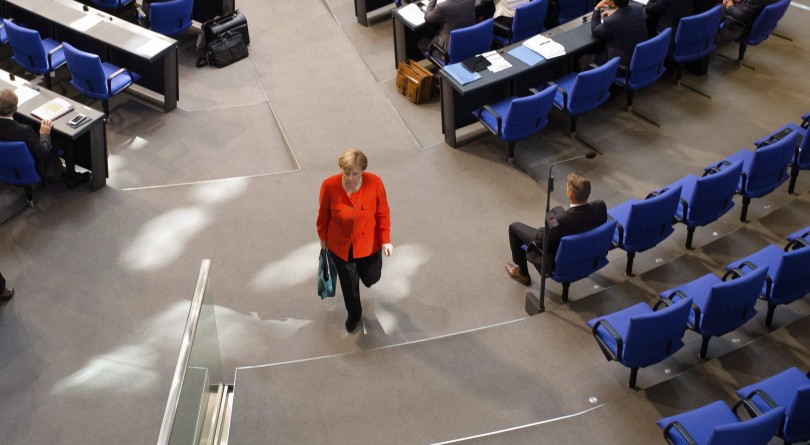 German Chancellor Angela Merkel, the unofficial face of liberal, federal Europe, is on her way out, leaving a worrying vacuum (Markus Schreiber/AP/CP)

Ben Woodfinden is a doctoral student in political science at McGill University.

The anthem of the European Union, Beethoven’s Ode to Joy, has been called a “declaration in favour of universal brotherhood.” But Europe’s triumphant anthem increasingly rings hollow. The seemingly unstoppable ascendance of nativist and populist parties has set up a renewed crisis of confidence in Europe’s future.

October brought the direst of events for the European Union: the Christian Democratic Union (CDU), led by German Chancellor Angela Merkel, suffered a disastrous electoral defeat in the state of Hesse. A generational figure who has been Europe’s unofficial leader for most of the 21st century and the unquestioned champion of a federal vision of ever closer union, Merkel announced that she will resign as CDU leader and will not run again as chancellor.

Her departure leaves an enormous hole at the heart of Europe, with no heir apparent; populists are now poised to fill the power vacuum. The timing could not be worse: a series of dramatic events looms large in 2019 that might not just end her vision of a federal Europe, but could force the EU to protect the entire project from disintegration.

It will begin in a post-Merkel Germany. Merkel says she intends to stay on as chancellor until 2021, but her party will choose a successor in December. Annegret Kramp-Karrenbauer is the most moderate candidate standing for the leadership, but the CDU base appears ready to shift rightward. If Kramp-Karrenbauer, who already holds more conservative positions than Merkel on issues like immigration, does not win, it is likely that a Merkel critic would become the next leader, making Merkel’s position as chancellor untenable. If the governing CDU does lurch to the right (and bring with it a more hawkish policy toward debt-ridden EU members like Italy), it could result in pressure on the European Central Bank to raise interest rates, which could lead to a Greece-level crisis that would push the eurozone to the brink once more. That in turn could spark more conservative policies on immigration and borders that could set off a chain reaction across the continent. Post-Merkel Germany may not just be unable to take up Merkel’s role as the EU’s primary champion—it might be unwilling, too.

That would represent an opportunity for her opponents across the continent. In recent years, a bloc of nations known as the Visegrád Group has undertaken an ideologically illiberal project that rejects the Brussels-Berlin consensus. Visegrád’s de facto leader is Hungarian Prime Minister Viktor Orban, and while it’s hard to clearly define this project, Orban has spoken explicitly of his desire to build an “illiberal democracy” and “a new constitutional order based on national and Christian foundations.” Orban’s reign in Hungary has combined strong economic growth and development with opposition to mass migration and cultural conservatism, and as much of southern Europe continues to suffer from low growth and high unemployment, the allure of Visegrád will only grow.

RELATED: The spectre of bad internet laws in Europe should be a warning shot for Canadians

Indeed, the seeds of the disenfranchisement that has fuelled the conflicts between Visegrád and Brussels were first planted during the continent’s 2015 migrant crisis, when a million migrants descended upon Europe. The numbers have dropped, but the nativist subtext in European politics can be directly traced back to this. Merkel’s decision to keep borders open at the height of the crisis damaged her credibility in the eyes of many Germans and Europeans, as Merkel’s strength of will in moderating people’s basest instincts was perceived as obstinate stubbornness. The result has been open defiance from the Hungarians, Czechs and Poles, and has in part led to the election of an Italian coalition government consisting of the populist and EU-skeptic Five Star Movement and the far-right Northern League.

At the end of March, the U.K. is scheduled to formally leave the EU, and even as EU officials insist Britain’s diminished role won’t deal a blow to EU ambitions, the damage will be felt all the same. Brexit also offers real proof, both to supporters and skeptics of European integration, that ever-closer union is neither inevitable nor unstoppable.

In May, a new European parliament will be elected, and populists and Euroskeptics are poised for a breakthrough. Recent polls even suggest Marine Le Pen’s far-right National Rally party once again has a chance to overtake Emmanuel Macron in France.

The EU has spent most of the past decade shuttling between crises, but it is only now, with Merkel’s political demise, that the damage is really beginning to show, as the democratic order’s tussle between “globalists” and “nationalists” is suddenly on full display in Europe. Ode to Joy may once have proclaimed Europe’s united future, but for believers in a united, democratic Europe, the sombre Moonlight Sonata might soon be more fitting.