Everything you need to know about herd immunity. Hint: we're a long way off. 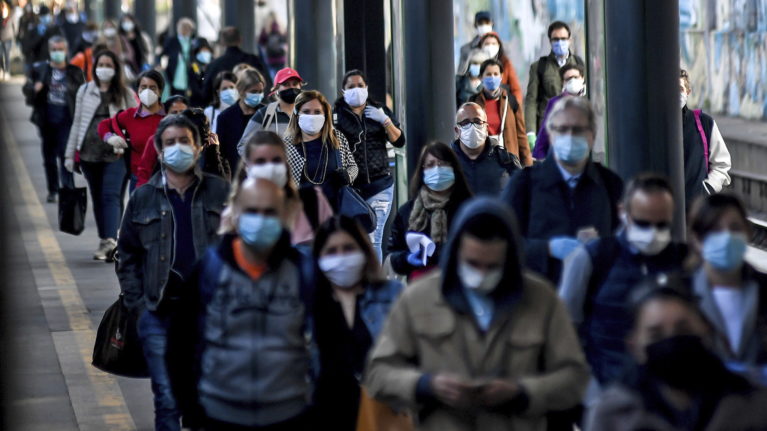 Historians will recount this time as a moral conflict between global epidemiology and global economy. But as cities and governments impatiently prepare to allow workers back to the workplace, children back to school, and tourists back to the beaches and bars, they may be overlooking a vital factor: the hard-earned suppression of that first epidemic curve may be lost as case numbers and casualties inevitably build into a second wave.

Singapore won international recognition for “best practice” in pandemic control during February when the virus was still in its early phases outside of China’s borders. But now the number of COVID-19 cases are on the rise. Since Apr. 1 cases in Singapore have increased 325 per cent. Right now, without the benefit of hindsight, and struggling to make sense of the choices open to us, we ask: Is there a winning strategy? Or at least an optimal compromise?

One thing is certain: Remaining under lockdown in your basement, jealously guarding your coveted stock of toilet paper and waiting for a glimmer of vaccine’s distant hope, cannot be called a “strategy” by any stretch of the imagination. Mathematical modellers Ashleigh Tuite, David Fisman and Amy Greer from the University of Toronto and the University of Guelph predict that without vaccines, more than half of the population will need to become infected before the pandemic reaches “herd immunity.”

MORE:  Footprints of the coronavirus: How it came to Canada and went around the world

What does this mean for Canada, which has a population of 37,692,000, with 61,960 cases and 4,040 deaths officially reported at the time of writing? To estimate the true numbers of people who have recovered from infection, we must ignore the confirmed case counts and multiply deaths by 100 (assuming infection-fatality rate is close to one per cent). That means there are 404,000 infections, minus 4,040 deaths, which yields a hypothetical 399,960 survivors, who should be immune when fully recovered. But they comprise only 1.1 per cent of the population, leaving 98.9 per cent of the nation still completely susceptible to the virus.

Let’s take it a little further. The natural limit of any pandemic is when immune individuals reach a proportion effectively preventing sustained transmission of the virus because most of the people it encounters are already protected, either through infection or vaccination. This is calculated from the initial R-naught (which indicates how contagious an infectious disease is). Researchers at Imperial College, London estimate the R-naught of coronavirus to be between 2.2 and 2.6. Thus, herd immunity would be well under way when 54 to 61 per cent of the population is immune. For our Canadian population, that’s between 20.3 and 22.6 million. So far, we only have an estimated 0.4 million immune people.

Any attempts to exercise U.S.-style “civil liberty,” riding roughshod over all precautions and simply opening everything up, could result in between 201,000 and 224,000 deaths in a month or two, with the hospitals completely overwhelmed. Far-fetched? Not at all. The virus is still lurking out there and there’s nothing to stop it spreading through the newly liberated population sooner or later. Only a vaccine can produce herd immunity safely, and that’s a long way off.

How long would it take to reach herd immunity?  The good news is that the efforts of Canadians toward slowing transmission (“flattening the curve”) has been successful in that the reported new cases and deaths in the last three weeks have flattened out at about 1,800 new cases and 180 new deaths a day. So in case you were misreading this as a green light to return to normal, put that thought on pause. The slowing of the spread is the result of our collective foot on the brake; release it, and the movement will continue. Flattening the curve is not rationale for stopping the pressure, it is rationale for continuing. Otherwise the gains we’ve made will be lost.

There are only two planning options.

The first is what might be called the “force-and-contain” approach. It will initially require not just a flat curve, but zero new cases each day for as long as two incubation periods (about a month), at which time, if verified by intensive random testing, the virus can be assumed to be absent. With borders closed, the clammy, pallid population can be brought blinking into the bright sunshine. This would resemble the time just before the first case appeared, necessitating watchfulness and monitoring, but this time with routine testing. Infected individuals would be placed in supervised isolation until they are confirmed virus-free, or do not survive. No herd immunity would be required, but the society would live with the anxiety that a stray virus might start the whole process again until the eventual availability of vaccine. Can this be done? On Apr. 8, the city of Wuhan was declared open and free from the infection after a month of zero new cases and two months of lockdown. New Brunswick seems to be there now.

The second approach might be called “release-and-protect” approach, but it comes at a price: an inevitable increase of COVID-19 cases and casualties, and continuing stress on the hospital system. Intense resources would be needed to minimize infections and deaths through stepped-up precautions, to avoid overwhelming the medical system, and to protect the most vulnerable sectors of the population, who would still need to live with some form of distancing until the arrival of vaccines. So what would this approach entail?

Long before implementation of “release-and-protect,” weekly counts of new cases and new deaths should have at least reached a plateau (which they have), and preferably have started to decline (which they haven’t). Hospital facilities, ICU beds, equipment and all human resources should be considerably below capacity and with reserves. Sufficient quantities of virus-testing kits, reagents and the personnel and facilities to run them, must be already in place, as well as certified antibody test kits with acceptably high sensitivity and specificity (minimizing false positives and false negatives).

A planned, phased process is needed, in which people in defined sectors would be allowed back to work, subject to increased precautions, and increased testing, monitoring, screening, and epidemiological surveillance. Categorization of people on the basis of risk would be essential. For instance, those found to be virus-positive, symptomatic or not, would be placed in monitored isolation either at home, or in a government-run centre (e.g. hotel) for that purpose. They would be paid “isolation wages,” meals included, until they are virus-free. People who had effective antibodies, and were therefore immune, would be very valuable and could move and work anywhere without restriction. However, those in the high-risk group⁠—those 65 years old, with type-2 diabetes, pulmonary diseases, cardiovascular diseases, obesity, hypertension, immune-suppressed⁠—will still have to be protected against the virus until vaccines are available, or until herd immunity is reached.

So why is a second wave inevitable?

It’s essential to understand that a second wave of infections and deaths, however small, is unavoidable because the vast majority of the population are still susceptible, and the virus is still circulating undetectable in apparently healthy citizens. Numerous reports confirm more than half of virus-positive people are asymptomatic at the time of testing. Combine that with the realization that for this disease, the serial time—the time from your infection until the the time you infect someone else—is less than the incubation period.

That’s why for a release-and-protect strategy to have even a chance of working, testing has to be ramped up enormously. Staff in high-risk institutions or occupations—long-term care homes, hospitals, bus drivers, taxi drivers, personal service workers, hairdressers, flight attendants, dentists, and so on—would need to be tested each week as a condition of continued contact with clients or customers, in order to prevent onward transmission.

Workplaces would have to be assessed and assisted in provision of appropriate precautions—plexiglass, masks, hand-disinfectants, maximum numbers in a space, distance/separation, etc., and enforced. Provision of such facilities would be the responsibility of the employers, and considered part of the cost of resuming business. Success of this approach would require due diligence and engagement of all individuals involved. And the risk assessment needs to be comprehensive, integrating considerations about washrooms, lunch rooms, transportation to work, and surfaces sanitization.

Let’s be honest: this is making the best of a bad situation. If carried out effectively, with buy-in and compliance at all levels, and enforcement if they don’t, a release-and-protect approach allows society one chance to slowly get back to work and build herd immunity at a sensible rate while we wait for vaccines. But cases and deaths must be minimized, hospital facilities must be preserved, and those most at risk must be protected.