Tabatha Southey: There is no Obamagate. Obamagate is so not there that they are soon to add Obamagate to the list of ingredients in an Aero bar. Nature abhors Obamagate. 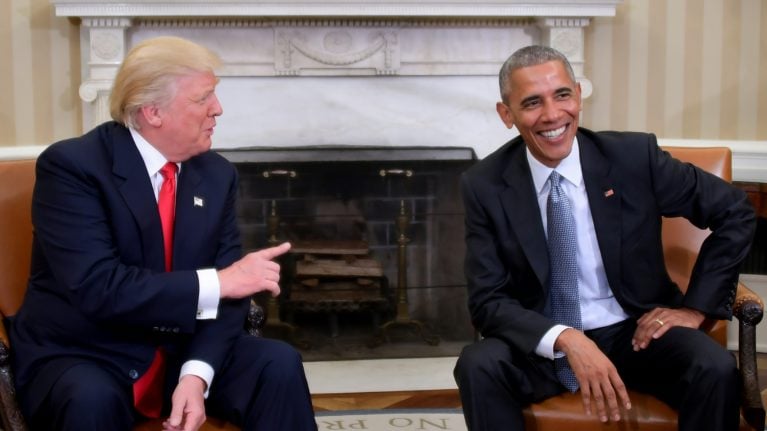 Congratulations, if you have no specific facts about “Obamagate” on hand, you’ve clearly done your homework. There is no Obamagate to know about. Drawing a blank when I mention Obamagate? Good. You just scored 100 per cent on the Test Your Knowledge of Obamagate exam.

Obamagate does not exist. It is not there. It never was there, and having spent much of 2016 being essentially Rick Rolled by then U.S. presidential candidate Donald Trump, many, though not all, of the media appear to be treading more cautiously around the now-president’s latest gambit, that being the utter fantasy that is Obamagate.

Obamagate is the mythical grandchild of other fabricated scandals spun by Trump over the years. It’s bred of the announcement that President Barack Obama had Trump’s phone tapped during the election campaign, and it is the offspring of “her emails” and Hunter Biden, which never procreated. It is the invented great grandchild of Birtherism, the ridiculous fiction that Obama was not born in the United States and was therefore not qualified to be president.

When asked last week by The Washington Post’s Philip Rucker what crime this Obamagate travesty he’d been tweeting so much about involved, Trump replied that, “It’s been going on for a very long time … You know what the crime is. The crime is very obvious to everybody.”

In short, Obamagate is a really hot Canadian girlfriend who totally exists but you can’t meet her because she’s shy and also she does not show up on Zoom calls because she is a vampire.

Trump later declared Obamagate to be “the greatest political scandal in the history of the United States,” which is weird because even that time Obama wore a tan suit actually happened. Obamagate is nothing.

Obamagate is so nothing that if it took a What Part of the Universe Are You? quiz that was secretly harvesting all its friends’ Facebook information to better micro-target racist political ads, Obamagate would be told it was the Infinite Nothingness of Outer Space. Then it would tell its equally imaginary friends that the quiz was “Sooooo accurate, it was spooky!”

Trump often tries to make a thing out of a non-thing purely to get attention. Donald can be forgiven for thinking that if you get enough attention in America they make you president. Sometimes all it takes is him being grumpy because Fox News is being insufficiently fawning towards him, or because Barack Obama was elected president and Trump still hasn’t gotten over that.

Other times he seems to try and thing unthings in an attempt to distract people from an actual thing, or another actual thing. Whatever instigates it, whenever Trump’s total disinterest in learning leaves whichever new thing he’s on about full of holes, people aligned with him start running around in circles trying to fill in the blanks. Often journalists and commentators will take a stab at this if only because reporting, “The President said a lot of words meant literally nothing today” might be read as biased.

When this chapter of American history is written, it will read like a version of the Emperor’s New Clothes in which the emperor just strolls around the court and town shouting, “I am completely nude! I am buck naked! Look at me, I’m starkers! Behold the Imperial Penis!” and everyone around him still keeps complimenting him on his outfit.

Trump supporters, both on staff and not, have been only too happy to pour whatever they can get their hands on into this great sucking nothingness called Obamagate. They do this reflexively now when Trump tries to will a thing into existence. They grab something, run it up the flagpole, then they run under the flagpole and salute it. If that spectacle fails to inspire enough breathless reporting about how, say, “many people believe that the coronavirus was engineered to create demand for used Sony Walkmans, but some experts disagree,” they move on to the next implausible accusation hoping that it will earn that most overused and degraded suffix—gate.

It is my fervent hope that one day a world-shaking scandal will take place at the Scandal Hotel and we can put a stop to this gate nonsense entirely.

Currently Trump devotees are stuffing that empty space the president has labelled “Obamagate” with the theory that President Barack Obama secretly directed the FBI to target retired general and alleged kidnapping enthusiast Michael Flynn (a man Obama reportedly warned Trump not to hire) in order to make Trump look bad.

As evidence, Trump’s supporters present a conveniently declassified email in which then-national security advisor Susan Rice describes President Obama as wanting to make sure any investigation of Flynn was “handled by the Intelligence and law enforcement communities ‘by the book.’ ”

To be charitable to Trump and company, this would indeed have been pretty suspicious had that meeting taken place on Official Executive Branch Opposite Day.

That might even have constituted an “Obamagate,” or at least might have made Obamagate a twinkle in Obama’s eye, but the meeting took place on an ordinary Friday.

There is no Obamagate. Obamagate is so not there that they are soon to add Obamagate to the list of ingredients in an Aero bar. Nature abhors Obamagate.

Obamagate is an absence. It’s the space where an understanding of the gravity of America’s circumstances—circumstances brought on in part by the fact that the nation is facing a devastating public health crisis while being governed by a man who thinks windmills cause cancer—and some hint of planning and leadership should be.

Obamagate is so made up that I can’t even type out the word “Obamagate” without my hands involuntarily going up in the air to make air quotes. One of my children nearly lost an eye just now bringing me a cup of tea.

Obamagate is yet another way of saying, “Hey, look over there! But also at me!” in Trump. It may in fact be Trump at his most lucid and intelligible. This is, after all, a man who this week said, “I tested very positively in another sense so—this morning. Yeah. I tested positively toward negative, right. So. I tested perfectly this morning. Meaning I tested negative.”

Trump trying to talk about real things killing people resulted in the President of the United States performing a solo, pandemic-themed version of Who’s On First?

It’s understandable that his advisers and supporters prefer he talk about nothing at all, but not forgivable.