Expanding eligibility for MAID should not be rushed

Jane Philpott and Jody Wilson-Raybould: Medical assistance in dying is complex and deeply personal. Is there enough medical and social evidence to understand the implications of an expanded law? 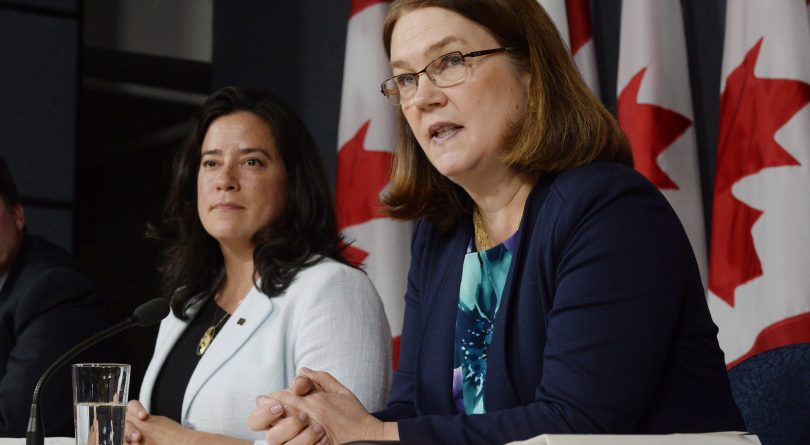 Previous Health Minister Jane Philpott, right, speaks as previous Justice Minister Jody Wilson-Raybould looks on at a news conference in Ottawa on Apr. 14, 2016. The federal government introduced a long-awaited and controversial new law spelling out the conditions in which seriously ill or dying Canadians may seek medical help to end their lives.The legislation says there should be a choice of medically assisted death "for adults who are suffering intolerably and for whom death is reasonably foreseeable." (Adrian Wyld/CP)

Jane Philpott is a medical doctor and former member of Parliament. From 2015 to 2019, she served as federal minister of health, minister of Indigenous services and president of the Treasury Board. Jody Wilson-Raybould is the independent member of Parliament for the British Columbia riding of Vancouver Granville, former minister of justice and attorney general of Canada.

Canadians are increasingly turning their minds to questions of dignity and well-being in the process of dying. Given a choice, most people would like to die peacefully, without prolonged suffering.

Canada passed a legal framework to support Medical Assistance in Dying (MAID) in 2016. We were the federal ministers who led the drafting of Bill C-14 to introduce the law. Since then, we have heard beautiful stories of how people, with their families and friends, have been able to choose to die in peace and comfort, surrounded by their loved ones, how suffering has been alleviated, and grieving supported.

Last fall, the Superior Court of Quebec ruled that it is unconstitutional to limit access to MAID to people nearing the end of life. The federal government decided not to appeal this ruling and has indicated a plan to expand eligibility for MAID beyond people who are near the end of life.

MORE: Assisted dying was supposed to be an option. To some patients, it looks like the only one

While thousands of Canadians—some 6,700, according to a report published by Health Canada in April 2019—have accessed MAID, we question whether there is enough medical and social evidence to understand the implications of potential changes. Has a substantial consensus emerged to support an expanded law? Given their choice not to appeal the Quebec ruling, the federal government intends to change the law, whether the legislative or social facts have shifted or not. The question is to what degree.

Assisted dying is a complex and deeply personal matter. This work should not be rushed. The federal government should ask for an extension for the Quebec decision to come into effect.

In 2015, the Supreme Court of Canada struck down an absolute prohibition on physician-assisted dying. The case was initiated by Kay Carter (Carter v Canada), who suffered from a case of spinal stenosis deemed to be grievous and irremediable. In doing so, the court overturned the 1993 Rodriguez decision in which the right to assisted dying had been denied. They stated that the Canadian and global context, what they described as the “matrix of legislative and social facts,” had sufficiently changed over time. But the Court did not provide guidance as to what legislative framework—if any—should be put in place. They appropriately left that work for Parliament.

MORE: Should mentally ill Canadians have access to assisted dying?

In legislating MAID in 2016, there was a consensus that the criteria to qualify for MAID should not be broader than the parameters of the Supreme Court decision. The criterion that death should be “reasonably foreseeable” was made in response to Carter, who suffered immensely at the end of her life. The term was also designed to provide flexibility in its application. It did not limit MAID to terminal illnesses or specify, as is done in some U.S. states, that a person must be within six months of death. The law allows medical professionals to use their judgment based on knowing the case and understanding their patient.

As the Ministers of Justice and Health in 2016, we faced a court-imposed deadline, and the consultation process was rapid but robust. The parliamentary course included a special joint committee of senators and members of Parliament. There was debate in committees and on the floors of both the House of Commons and the Senate. Canadians expressed a range of opinions and government received a large volume of helpful and thoughtful feedback. Some were upset that a law was tabled at all. Others criticized the law for not being broad enough. The constitutionality of the bill was considered by Parliament and two Charter statements were tabled to support the legislation and to informed parliamentary and public debate on the bill and to help increase an understanding of its Charter implications. The Charter statements explain the balancing of Charter rights achieved in the bill.

We expected this legislation would evolve. Knowing that some concerns were unresolved, the 2016 law committed to studying three complex issues included in requests for MAID—mature minors, advance requests and cases where a mental disorder is the sole underlying medical condition. The Canadian Council of Academies studied these questions and produced four volumes of reports in 2018. They concluded there is very limited guidance on these issues because there are not enough places in the world that have allowed broader access to assistance in dying.

The 2016 law committed to a formal review to take place five years after coming into force, and that review is still scheduled to occur.

While some find the term “reasonably foreseeable” frustratingly vague, physicians tell us this criterion has been important in that it facilitates participation for providers. Many doctors are willing to expedite the natural process of dying, given their traditional role to relieve suffering. There is, however, a qualitative and ethical distinction between hastening a death which is already drawing near, and ending a life which is expected to persist. This is no small divide. It is incumbent on lawmakers to consider the implications this may have for clinicians, and their willingness to participate in a more expansive framework for assisted dying.

The highest obligation of government is to protect its most vulnerable citizens. The courts have been presented not only with individuals pushing for broader access to MAID but also cases proposing that the law is already too broad and renders some individuals at risk. Disability rights groups across Canada have been and continue to be vocal in their opposition to any expansion of the law. Particularly those who lack socioeconomic supports may be at risk of coercion to MAID. Others may lack access to support for mental health. If individuals cannot access medical or social assistance in living, they may feel pressure to consider assisted dying.

Finally, there is a need to invest in better access to palliative care. The last thing anyone wants is people choosing MAID because palliative care is not an option in their community, and they do not want to be a burden on their family. We heard this message from palliative care physicians. As the government envisions changes to MAID, it must also ensure access to high-quality palliative care at home or in hospital for all Canadians. Our current reality falls short.

Access to MAID has relieved suffering and allowed thousands of Canadians a peaceful death. The world is watching what Canada does next. We encourage the government to exercise caution if choosing to alter the balanced approach that has been widely supported by Canadians. There remains a diversity of opinions on the topic. Parliament has a solemn responsibility to genuinely consider those perspectives.