Faith during the coronavirus crisis: 'Love thy neighbour as yourself'

Michael Coren: Some fringe Christian church leaders are fighting orders not to hold services. Their actions have been more hysterical than holy. 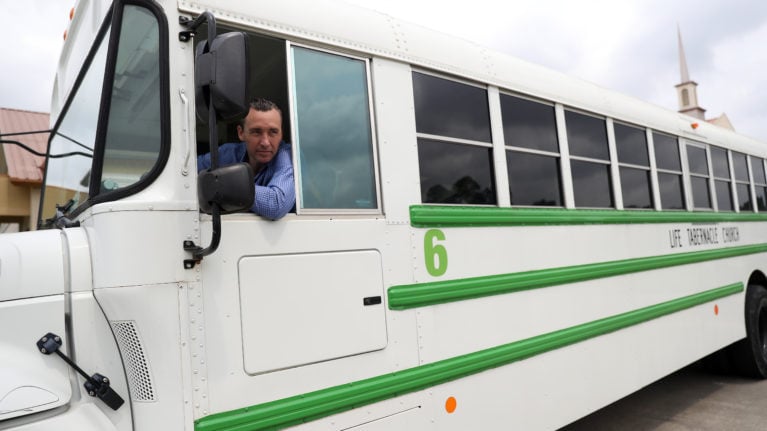 Pastor Tony Spell talks to the media as he drives a bus of congregants after his Easter church services on April 12, 2020 in Central, Louisiana (Chris Graythen/Getty Images)

In 1633 the plague was ravaging Europe. In the Bavarian town of Oberammergau the people prayed that if they were saved they would stage a Passion play every 10 years. They were and they have done so. Until now that is, when the modern version of that 17th-century terror is named coronavirus. There’s irony for you. Mind you, their salvation was probably due to their sealing the borders rather than divine intervention. Or perhaps both, because faith and practicality should always travel together.

That’s generally what has occurred in the past few weeks, as the vast majority of churches in Canada, the U.S., and most of the rest of the world have closed their doors, acted responsibly, put their services on-line, and reached out to congregants to offer help and support. It’s been impressive, swift and responsible. Most churches but not all.

On the conservative fringes of Christianity–Catholic, Protestant, and Orthodox–church leaders have resisted and rejected the lockdown for various reasons. Some see it all as state intervention, and embrace an eschatological horror of the government telling them what to do.

In some cases, such as the Orthodox Church in Russia, it is partly understandable in that under Communism the state was a persecuting oppressor. In others, it is largely the stuff of right-wing rhetoric and fundamentalist theology: government is evil by nature if not positively satanic, the virus is a hoax, God will not allow harm to come to people who worship in church, the alcohol in the sacramental wine kills the disease, and as one woman in Ohio told CNN as she was leaving church, she wasn’t worried because “I’m covered in Jesus’ blood.”

READ MORE: The Coronavirus and God

In California, a group of pastors have filed a lawsuit against Governor Gavin Newsom and local officials, claiming that the “stay-at-home” policy was contrary to the Constitution because it criminalized “the free exercise of religion.” Other church leaders in the U.S. have been fined and even arrested for holding church meetings.

Florida mega-church pastor Rodney Howard-Browne, for example, was arrested for holding two services involving hundreds of people. Louisiana pastor Tony Spell was arrested for holding services where 26 buses brought worshippers to his church. The list goes on. More than a dozen U.S. states, however, have made places of worship exceptions in their lockdowns, partly due to political pressure from the evangelical lobby. One doesn’t want to appear cynical, but it’s worth remembering that these large churches take in enormous amounts of donation money each Sunday.

In Paris, France, the ultra-conservative Society of Pius X, a breakaway Roman Catholic group, staged a Latin-rite Easter service, and images from the ceremony show numerous people clustered together, all ignoring safety precautions. The priest has been fined.

In Canada there has been a general acceptance among more conservative churches, although some in the somewhat strident anti-abortion community—not particularly supportive of Pope Francis or anything that appears in any way progressive—have expressed outrage at Mass being suspended for the laity. A petition signed by a number of leading Catholics has been circulated, stating. “Something is terribly wrong with a culture that allows abortion clinics and liquor stores to remain open but shuts down places of worship.”

That’s just political hyperbole of course but within it there is a greater, more interesting question to be asked about priorities and about freedom of worship. We assume certain liberties as a given in modern society, and religious toleration is certainly one of them. This is a world crisis and rational consensus understands the needs for social isolation; but we do allow people to shop, so why not praise and pray?

The answer is that we do. Freedom of worship has not been restricted, merely the right to assemble in churches and thus increase the likelihood of the spread of infection. Such a spread doesn’t only endanger the person who decides to attend church, but the innocent other party who the worshipper then meets. Remember the central teaching of Jesus, “This is the first and the great commandment. The second is like it: Love your neighbour as yourself.”

The point that must be emphasized is that most churches don’t demand regular attendance, though it’s advised and appreciated of course, and the largest one that does insist—Roman Catholicism—has been enlightened and responsive regarding the pandemic. In theory, Rome demands that adherents receive the Eucharist at least every Sunday, and believers are in a state of sin if they miss without valid reason. But the Catholic Church has given a general dispensation during the crisis, and also airs services on-line.

A great deal of the negative Christian reaction has been more hysterical than holy, and while the extremists are relatively few in number and far from sophisticated, they are noisy and well connected. The loudest splashes, we are told, are always in the shallow end of the swimming pool. Quite. This is a time of suffering and sacrifice for everybody—if followers of Jesus don’t understand the nature and significance of those challenges they should ask themselves some dramatic questions. The answers may well give them pause.