Why we have deficits—in good times as well as bad

Ottawa won't keep its nose out of provincial spending 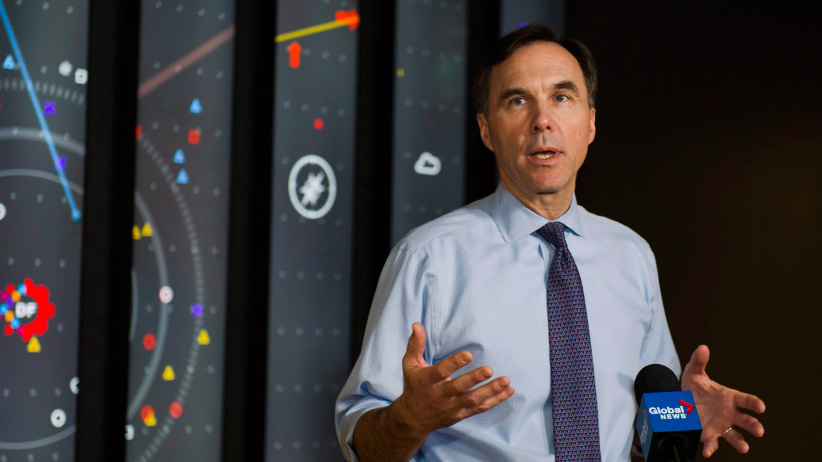 Mark Milke is author of Tax Me I’m Canadian!: A Taxpayer’s Guide To Your Money And How Politicians Spend It.

If you want to understand why the federal government has clocked deficits in every single year since the 2008/09 financial crisis, save one (2015), and why there won’t be another black-ink budget until at least the mid-2020s, look at the pre-budget picture with Finance Minister Bill Morneau where he changes his shoes. He does so in front of school kids and that’s a clue: Primary education is a provincial responsibility, but it was symbolic of where much federal attention is focused these days, on funding matters in, or of relevance to the provinces.

One might argue a child-friendly picture for any politician is just that; sometimes a political photo-op is a just a political photo-op. Except that in his Tuesday budget speech, Morneau told the story of Joan, from Algonquin College, and thus another tip to federal attention—higher education, which also happens to be a provincial and constitutional responsibility.

The picture and the speech both help illustrate why successive federal governments run regular red ink in not only lousy economic times (the last recession) but in good ones (now, in most provinces): Politicians seemingly love to interfere in each other’s jurisdictions, either to demand “help” from other levels of government or to offer it.

The just-announced national Pharmacare program is only the latest example. Ottawa has long interfered in health care, another area of provincial responsibility, with federal cash to as both the carrot and stick to enforce federal preferences.

Budget 2018 continues this Ottawa-knows-best trend for issues that are wholly constitutionally provincial: the opioid crisis (health care), early learning and child care (education), more cash  for “seasonal industries” via the provinces, a learning bond experiment in Ontario, apprenticeship programs, funding for harnessing “big data” at universities (again, education and health care in that list). The federal budget even promises to fund food innovation in Ontario, though gourmet meals are as local and non-federal as one can get.

The federal government, of course, also continues twentieth-century transfer payment programs for provincial spending that live on in our century. That includes the equalization program, placed in the constitution in 1982 (though, as a now decade-old paper on the matter pointed out, its constitutional status is actually quite weak).

Transfer payments, regional subsidies and even the announcements for universities, regional slush funds or rural broadband financing announced over the last few months, they all share the intended two-prong effect: vote-buying, and spreading the illusion that the federal government can fix a local problem, be it in classrooms or in lousy internet connections.

Ottawa’s transfers also have another pernicious effect: blurring accountability between voters and politicians. To test this, imagine Atlantic Canada or Quebec without federal transfers. Take away the taxpayer-funded goodies and voters in such provinces would instead have three clear choices:

In other words, these examples prove the provinces need to get serious about the government services they want, the taxes they will pay and the revenues they will forego, or not.

Our earliest politicians understood why federal transfers were lousy policy

Canadian politicians have not always thought transfers between the federal government and the provinces were a good idea. In 1865, parliamentarian George Brown complained of how revenue raised in Upper Canada (later Ontario) was siphoned off by politicians from Lower Canada (later Quebec). “Immense sums of public money have been systematically taken from the public chest for local purposes of Lower Canada,” complained Brown, “in which the people of Upper Canada have no interest whatsoever, though compelled to contribute three-fourths of the cash.”

Brown thought the remedy was for the proposed new country—Canada, to clearly separate the powers of the central government from those of the provinces, which it, in fact, did in 1867. The creation of a new Dominion government along with provincial governments was to work because each would be masters of its own domain and responsible for the same, exclusively. “All local matters are to be banished from the general legislature…and if our friends in Lower Canada choose to be extravagant, they will have to bear the burden of it themselves,” remarked Brown with reference to his previous annoyance.

Without diving into obscure post-Confederation transfer payments, the historical record is that late nineteenth and early twentieth century transfers were few and assumed by Dominion politicians to be temporary. The preference of the day and the “why” was made clear in a 1905 speech from Prime Minister Sir Wilfrid Laurier: “It is a sound principle of finance and a still sounder principle of government that those who have the duty of expending the revenue of a country should also be saddled with the responsibility of levying it and providing it.” In other words, politicians would be more accountable to the public if it were clear that the same politicians who spent your money on a matter also taxed it, directly, from you.

Canada’s earliest federal politicians understood the folly and lack of accountability of one level of government funding another ad infinitum. It promotes unfocused and unaccountable governments. Brown and Laurier would be horrified if a modern-day finance minister were to choose a provincial spending responsibility to symbolize the federal government’s priorities.