Andrew MacDougall: The Liberals may try to make the ugly protests against Trudeau look like Erin O'Toole's fault—and there's a good chance it will backfire 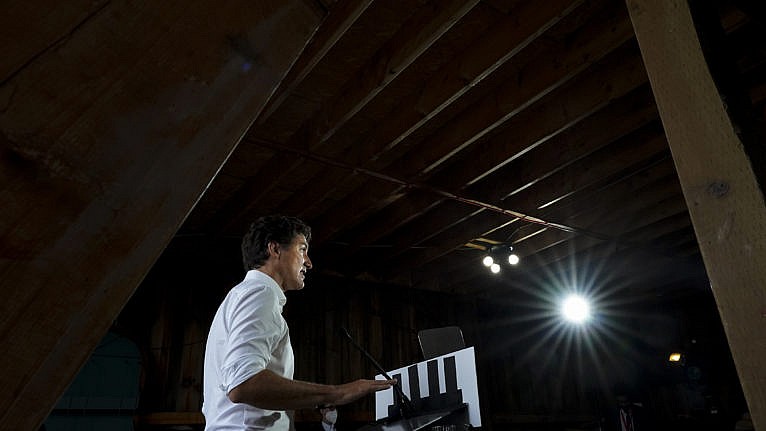 When it comes to encouraging moments in a campaign, seeing your leader with a noose around his neck makes for an unusual one. But when the first two weeks of your campaign have been as flat as that of Justin Trudeau and his Liberals, the sight of angry protestors screaming ‘treason’ and flaunting some new neckwear for their man was a blessing for the party.

How do we know?

Well, a quick tour through the Liberal corners of social media shows many citizens of Liberaland leaning hard into the past few days’ worth of incidents, in which Trudeau has been continually interrupted by a noisy and profane bunch of (largely) anti-vax protestors. Yesterday’s bunch of charmers even began chanting ‘lock [Trudeau] up’, prompting some media outlets following the Trudeau campaign to make the easy comparison to the MAGAistes down south.

Now to get the housekeeping out of the way. Protesting is everyone’s right and that goes for people who think COVID-19 is one giant hoax and/or play for government control over their lives. They can go shout their brains out about whatever bit of these lockdowns they don’t like. There is also a rich vein of ‘treason’ accusations running through Canadian history, as Brian Mulroney could attest when he was pitching free trade with the Americans during the seismic 1988 election. And while chants of ‘treason’ aren’t pleasant (or usually grounded in any fact), they’re not a sanctioning offense. Unless, that is, they’re accompanied by threats of violence. Threatening or perpetrating violence against politicians is a no-no, whether they’re Justin Trudeau, Stephen Harper, Doug Ford, or Pauline Marois.

Let us all also agree that Trudeau faces a particular brand of vitriol given he’s been the one calling the shots during the pandemic, which has forced governments across the country into massive interventions in people’s daily lives. Thanks mostly to this, Trudeau Derangement Syndrome has a sharper point than, say, Harper Derangement Syndrome ever did.

But there are two ways for the Liberals to play what’s happening now into the campaign with the aim of making vaccines the ballot question. One is to have the members of the team praise the Prime Minister’s resolve, leadership and tone following the cancellation of his rally in Bolton and his continued harassment by shouty yahoos. This was the approach of his Chief of Staff yesterday and that of Liberal MPs after Bolton. And then there is the other way to play it in: by pinning the unpleasantness on your opponent and making them the reason why rather angry some people feel empowered to hassle the Prime Minister. The latter approach was seen most clearly in a now-deleted tweet from a noted Liberal spinner (who just happens to be married to Trudeau’s Chief of Staff).

It’s still early days, but the early returns seem to suggest the Liberals will push the sharper attack, and make the distemper of our times Erin O’Toole’s fault. Yesterday, for example, the Liberals were pushing Conservative MP Cheryl Gallant’s more eccentric views about lockdowns (one of which came replete with an image of Trudeau in a noose, albeit a cartoon one). That Gallant has been…um…marching to her own drummer in Parliament since 2000 whilst never reaching a significant rung of power is probably a fair reflection on what her leadership thinks of her, despite Gallant having the stout backing of her constituents.

The coming days will tell us whether the Liberals intend to try and make a ‘Basket of Deplorables 2.0’ strategy their official counter to O’Toole’s flash start. Before they do, they should remember how well it worked out for Hillary Clinton when she invoked the deplorables as a counter to Trump. While elements of the Conservative support certainly sympathize with anti-lockdown sentiment, millions of voters who support them do not, and lumping them together could backfire, especially when voters know there is now a party that has made vicious opposition to Trudeau and lockdowns (and O’Toole, for that matter) its official policy: Maxime Bernier’s People’s Party of Canada. If anyone wants to see unhealthy vitriol, all they have to do is head over to Monsieur Bernier’s rather fruity Twitter feed.

The other thing the Liberals would do well to remember is their current position. Making these kinds of sharp attacks while you’re ahead or level can help to bury your opponent. Making them when you’ve had a shambolic start to your campaign and are behind in most polls can look like desperation. And when your leader’s brand proposition is positivity and his words about this election are that it’s the most important since 1945, every fling of mud cuts across those propositions.

The Liberals should tread carefully. The last thing they need right now is to hang themselves, especially when more civil contrasts on important items like climate remain.