Andrew MacDougall: The Liberals’ 2015 majority-winning campaign was a masterclass in tone against the snippy Tories. In this campaign, it's all turned around. 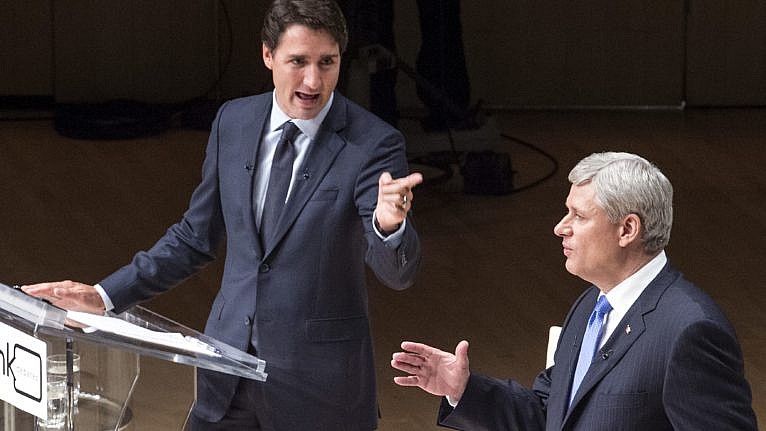 Trudeau and Harper trade words during the Munk Debate on foreign affairs, in Toronto, on Sept. 28, 2015 (Andrew Vaughan/CP)

Tone has been a major issue for the Conservative Party of Canada since its founding in 2003. The early opposition years featured an angry (yet deserved) focus on Liberal sleaze (see: Scandal, Sponsorship), while the early years in government were chippy on account of their rather tenuous position as ‘Canada’s New Government’ with only 125 seats to their name.

With a possible election around every legislative corner, Stephen Harper’s Conservatives hardly ever took their foot of the gas. When the Liberals finally got around to crowning a permanent successor to Paul Martin, the Tories were quick out of the gate to brand the nebbish and ineloquent (in English) Stéphane Dion as ‘not a leader’. Dion was rendered dead on arrival. There was even a pooping puffin.

Nor did things slow down when Liberal saviour Michael Ignatieff came to town/country. He’s ‘just visiting’ the Tory attack machine wailed, noting the then-Liberal leader’s rather tenuous ties to his home and native land. It was a rude awakening for the longtime academic, as evidenced by the entire book he wrote about the experience. Let’s just say the title ‘Fire and Ashes’ was an accurate description of the 2011 Liberal campaign and where it left the party.

The Tories were quick to also brand Trudeau out of the gate before he could get his legs under him. Only this time, the attacks (‘in over his head’ and ‘nice hair though’) didn’t stick. The charismatic Trudeau had something Dion and Ignatieff didn’t have: a compelling (and all-Canadian) back story and, more importantly, some serious stardust.

Trudeau also happened to hit the scene at the precise moment Canadians were becoming fed up with the Harper approach to politics and when social media-fuelled celebrity was a viable route to market for political messages. Trudeau re-energized and grew his party and then dropped an ambitious platform during the 2015 election.

The Liberals’ 2015 majority-winning campaign was a masterclass in tone. It radiated positivity and energy and drew the perfect contrast with a Tory machine that was out of gas. And with the economy improving and the deficit gone, Canadians took the opportunity to back the rookie leader.

Trudeau’s victory was a timely reminder most people don’t follow politics closely. In fact, most don’t follow it at all. It means most people don’t harbour the same hatreds as the average partisan. This is the point the Tories have consistently failed to grasp as they have flung their arrows the Prime Minister’s way. Sure, Trudeau has earned a few, most notably for blackface, SNC-Lavalin and this spring’s WE Scandal, but for most, Trudeau is still the smiling guy from 2015. He’s not Justin Turdeau or Turd’oh, of whatever juvenile appellation is currently whetting the lips of the meme monkeys.

Which makes the Liberals’ decision to have Trudeau front some of this campaign’s attacks even more strange. Instead of having the Prime Minister crow about his successful vaccine rollout and vast sums of money tucked into pockets, the Liberal war room is having him film self videos attacking ‘2-Tier O’Toole’ over jumped-up claims the Conservative leader would end Canadian health care as we know it. After years of telling Canadians he was for ‘evidenced-based policy’, Trudeau is now counting on Canadians’ ignorance of how their health care is currently delivered.

And while Trudeau fumbles about in his closet for an attack that sticks, Erin O’Toole is keeping things calm and collegiate. Bar the wonky Willy Wonka web ad from the Conservative war room at the onset of the campaign, the Conservatives—and O’Toole himself—have kept things largely above the belt. To the point where O’Toole could credibly decry the Liberal importation of ‘American-style’ politics into Canada following Chrystia Freeland’s foray into half-cocked hatchet jobs. We’re in bizarro land.

The trick will now be for O’Toole to keep himself in check and to check any candidate bozo eruptions, of which there have been few to date. With so many Canadians having come to expect a snide and snotty tone from the Conservative Party, O’Toole’s success on tone could be the difference between a Trudeau win and Trudeau departure.