Federal election 2021: The case for anger

Justin Ling: There are so many good reasons to be mad at our politicians who have abandoned their posts over the last year rather than defend the Charter and civil liberties 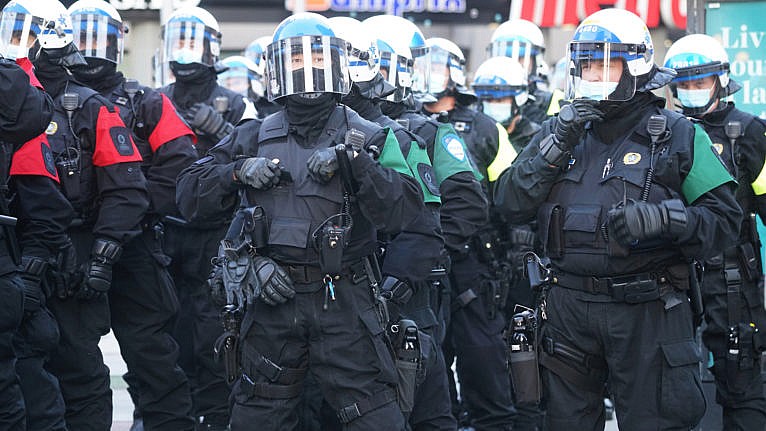 Montreal police ready to intervene at a protest against the return of the eight o'clock curfew in Montreal on April 18, 2021 (Mario Beauregard/CP)

It’s 1946. Police in Quebec have been instructed to “arrest on sight every known or suspected Witness.” That is: Jehovah’s Witnesses. A group particularly loathed by Maurice Duplessis, the tyrant premier of Quebec.

“If this is true, Quebec’s police power is being used to lock up men and women for holding a religious opinion,” reads a Globe and Mail editorial from that December, entitled “Return of the Inquisition.”

It was true. This was La Grande Noirceur: The great darkness. Under Duplessis’ tenure, some 1,500 Witnesses were arrested and prosecuted for crimes as minor as disturbing the peace and as serious as sedition. Countless others were bullied, harassed and cowed by the state in other ways—all because the devout Duplessis feared they were a threat to the Catholic Church. Duplessis ginned up anti-semitic fervour by accusing his opponents of working with Ottawa to settle scores of Jewish refugees in Quebec.

Duplessis died in office in 1959, just after the Supreme Court ordered him to pay $33,000 in damages to a Jehovah’s Witness whose liquor license was unfairly cancelled: An early victory for freedom of religion in Canada.

The following decade in Quebec was a wholesale rejection of Duplessis’ tenure, and a dismantling of the Catholic church’s stranglehold on the province. The Quiet Revolution removed religion from public life, enshrined Quebec’s generous social safety net, and began one of the most significant cultural awakenings in the 20th century. Quebec would even adopt its own charter of rights in 1975, protecting freedom of religion.

A similar push in Ottawa to patriate its constitution would prove, in a word, acrimonious. There was a fundamental fight over competencies: Who was really responsible for Canadians’ rights? In a Supreme Court reference, the top court found that the proposed constitution was so broad that any provincial law or regulation “would be exposed to attack if inconsistent with the provisions of the Charter of Rights.”

And, with the benefit of a few decades of hindsight, we can say fairly confidently: Yes. That’s what makes it great.

A police officer is hovering over a student, demanding to know her name—her real name. When he finally got it, the Montreal cop raised his voice. “That’s your fourth ticket for not respecting the curfew!” He shouted.

Just 19 years old, the student told the Canadian Press that she had racked up $6,000 in fines for not respecting the mandatory 8pm curfew—which stretched for more than five months, through Quebec’s punishing third wave in early 2021.

“The curfew does absolutely nothing, because I’m going to see my friends anyway,” she told the Canadian Press. “But if I have to pay, I’ll pay and learn from my mistakes.” Her friend standing next to her had also racked up some $1,500 in fines, over three arrests.

Meanwhile, a province over, two Ontario Provincial Police officers approached a gaggle of pre-teens. “[They] yelled at these kids—that they weren’t wearing masks, and weren’t socially distanced,” one of the kid’s moms told me earlier this year. The cops demanded ID from the youths. “We don’t have ID—we’re kids,” one retorted.

When one of the kids tried to wrest his scooter out of the officer’s hands, rightly objecting to being unlawfully detained, the cop tightened his grip and leaned over, shoving the kid to the ground.

It was a galling image that came just days after Premier Doug Ford announced, in essence, a police state. Citizens were told to stay at home. Gatherings of any kind were banned. Police would be given broad, virtually limitless authority to stop and question anyone. It was a set of orders so unfathomably draconian that no municipal police force would enforce them.

Through the pandemic, Canadians tolerated an extraordinary infringement of their civil liberties: Schools and businesses were closed, stay-at-home orders issued, masks required, and travel restricted. And, by and large, Canadians were happy to follow those orders. The courts, quite rightly, found that any infringement of our civil liberties by these measures were justified under section one of the Charter.

In other words: We gave up some of our freedoms to ensure the health and safety of everyone. That’s the point of a society.

Which is why Ford and Legault’s flustered and haphazard police states were so galling. Citizens had watched those leaders squander their sacrifices time and time again—dropping public health measures based only on an optimistic whim, only to drive COVID-19 cases through the roof.

What’s worse, these ham-fisted measures had absolutely no grounding in science. These leaders were forcing us to give up more and more freedoms, while failing to protect us, because of their own incompetence.

And where was the federal government through all this? Nowhere. Trudeau stayed consistently mum. There was no “attack” on those provincial rights inconsistent with the Charter. No federal intervention. No safeguarding of the right to walk around freely after dark. Or to assemble, safely, in a park.

Just total, absolute, and total deference to the province.

Many Canadians were shocked to see the scenes of furious protesters following Justin Trudeau’s campaign this election, spittle and rocks flying. The level of animosity felt like a jolting reminder that not everyone has been happy making sacrifices for the public good.

Many were shocked, too, to see People’s Party leader Maxime Bernier stage an unlikely and unwelcome comeback. The vast majority of the country has seen his party for what it is: An illogical and conspiratorial movement, designed to take advantage of real frustration for Bernier’s own ambitious ends. They recognized his ethno-nationalism as a dangerous, hateful, and illogical answer to that frustration.

Many, however, weren’t shocked at the anger because they were angry too—maybe not for the same reasons, and certainly not enough to vote for a charlatan of a politician like Bernier—but angry nonetheless.

And here’s the thing: They’re right.

Throughout 2021, we have let Canadian politeness and duty stand in the way of what should have been a very real, very hot, anger with our political classes. With few exceptions—notably, many of the big city mayors, and the Atlantic premiers—our politicians were either negligent, absent or actively harmful.

Unfortunately, we do not have a mechanism in our constitution that would force our politicians to do their job properly in times of crisis. We do, however, have a guarantee in that document that, crisis or not, infringements on our basic liberties ought to only be allowed where it is necessary and justified.

Ottawa is supposed to be the primary champion for the Charter. Yet, the silence has been deafening. In a campaign with all this anger bubbling underneath, nobody was willing to actually address it. Seemingly out of a fear of offending Legault or Ford.

When I asked Conservative leader Erin O’Toole if his party can truly claim to be the party of individual liberty and freedom, when they seem comfortable with provinces doing effectively whatever they want. “We’re the party of freedom—and respect,” O’Toole said. “And part of that respect is respecting the constitution. Respecting provincial jurisdiction.”

I asked NDP leader Jagmeet Singh a similar question: As prime minister, would you let the provinces run the show? Do you have any concern for civil liberties Singh derided Trudeau’s “hands-off approach” during the pandemic, but simply reverted to a talking point about domestic vaccine production.

This is, unfortunately, a trend.

Those leaders have tripped over themselves to defend Quebec’s ability to forbid anyone who wears a religious symbol from huge swaths of the public service. (When debate moderator Shachi Kurl dared to call such a law “discriminatory,” the three men lined up to denounce her affront to the nation of Quebec.)

The echoes with Duplessis should be fairly evident, here. In fact, earlier this month Legault drew the comparison himself: “He had plenty of faults, but he defended his nation,” the premier said. “He wasn’t ‘woke.’”

Our federal leaders have been equally quiet when Ford’s government introduced an extraordinary limitation on political speech by curtailing third-party advertising in provincial elections.

Both Legault and Ford have used the notwithstanding clause—an aberration, a mistake, and a fundamentally dangerous tool—to protect their unconstitutional legislation and override the Charter. Except more of that.

So now it is left to the courts to untangle this mess and, we hope, find a way to preserve our basic rights. But it shouldn’t have to come to this.

We should be mad.

Some people out there are irrationally angry: Mad at health-care workers, mad at vaccine mandates, mad at having to wear masks. That anger is misguided.

But there are so many good reasons to be mad at our politicians who have abandoned their posts over the last year.

We no longer have a guarantee in this country that the laws being passed by our provincial legislatures respect our basic civil liberties. We now know that provinces can do virtually anything, no matter how misdirected or ineffective, in the name of an emergency. We can’t even be sure that, when they do, Ottawa will bother to clear its throat in objection.

We come out of this election with the status quo, regardless of who wins. If we find ourselves in a new wave of the pandemic in the coming months, we may well see a return to curfews and stay-at-home orders. We may see our civil liberties shredded once more because the premiers have no idea what they are doing, and Ottawa is terrified to step in.

This isn’t how things are supposed to work. Our Charter is not optional. It shouldn’t apply only in retrospect, after years of prolonged litigation. It is a document that our Prime Minister is supposed to uphold and defend at every turn.

What we need now is a politician who is willing to say that.