The Conservatives' opportunity and the Liberal imperative

Bruce Anderson: While there’s a voter-rich battle to their left, Liberals must notice O’Toole is relaunching the fight for the centre that his predecessors weren't interested in 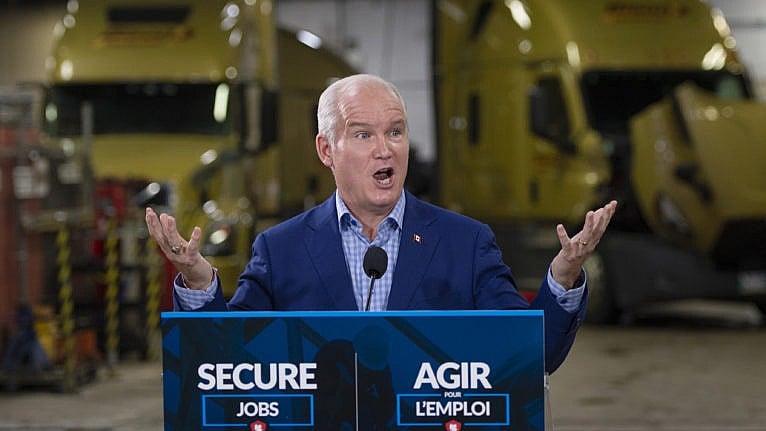 O’Toole makes a transportation announcement at a trucking company while campaigning in Winnipeg, on Aug. 20, 2021 (Ryan Remiorz/CP)

Having worked in several national elections, some for the Liberal Party, some for the Progressive Conservative Party, the polling I studied made one thing really clear—while it’s common to talk about the “base” as fundamental to electoral success, it’s really the swing voters that matter.

Elections in Canada are won or lost by a margin of 1 to 2 million votes, and the trading of these votes among parties can be tricky to see on the surface of polling data, but vital to study below the surface. Vote switching is what campaigns turn on—finding some share you can take from your opponent, figuring how best to win those voters, and then closing the deal.

In our latest Abacus Data work, something caught my eye. The number of Liberal/NDP switchers—people who say that they will vote for one of these two parties, but if they change their mind it will be a vote for the other one—is a lot bigger than the number of Liberal/Conservative switchers. Today, one fifth (21 per cent) of the electorate indicate their choice will be red or orange. About half as many (9 per cent) say their choice will be Liberal or Conservative.

Historically, this wasn’t the case. The deepest pool of swing voters was Liberal/Conservative switchers, a mass of people who lived around the centre of the spectrum—people who didn’t like too much government spending or too little government services, whose progressive instincts were tempered by a frugal mindset, who could feel tempted either by grand ambitions of the Liberal Party or worried that we were getting out over our skis and needed to be more practical.

I think a few things caused the pool of Liberal/Conservative switchers to shrink and probably the thing I’m most curious about is whether Erin O’Toole is making progress in turning that around.

Here’s what made the pool shrink in my opinion.

When the Progressive Conservative Party was replaced by the Reform Party, the Canadian Alliance and then the Conservative Party of Canada, most of the campaign energy of that new party went to cementing the foundation rather than building. It was as though self-styled “mission conservatives” were so relieved at the thought of not having to water down their personal agendas that they paid little attention to how many voters they were pushing away, as long as they could see a path to about 38 or 39 per cent popular vote. Turns out that approach did make some people who would normally consider Conservative their second choice decide the party wasn’t for them, and it left the Conservatives working with very thin margin for error if they were going to win an election.

More recently, a great deal of Conservative energy has been poured into brittle criticisms of Justin Trudeau. I’ve no doubt it feels good within the Conservative caucus rooms and raises plenty of money from diehard Conservative voters but it hasn’t connected with other voters who might be open to the idea of a Conservative government, but don’t hate Justin Trudeau. Trudeau haters are mostly a lock for the Conservative Party, they aren’t going anywhere, especially if they see the prospect of a victory. But a campaign about anger at Trudeau is counterproductive among voters who haven’t been interested in that argument so far.  On that point, 62 per cent of the Liberal/Conservative switchers have a good impression of Trudeau, 42 per cent have a good impression of O’Toole.

It’s early days, but in Erin O’Toole the Conservatives may have a leader who gets this math, quite possibly because it is the math of his political birthplace in Ontario.  The absent voice of Jason Kenney, the relative silence of Pierre Poilievre and some other front benchers, no campaigning with Doug Ford are all things you would do if you wanted to win votes from the Liberal Party and not only excite the base. He saw in Derek Sloan a line that needed drawing and he drew it.

These moves have given the Conservatives more potential to grow. And while straying from base rallying might have driven down support among hard core conservatives, his popularity with them, which had been relatively soft, is firming up.

O’Toole’s platform might fail a stress test on some big issues like climate change and childcare. His caucus includes a substantial number of people who, left to their own devices, would revisit abortion and waffle on the rights of some minority groups. A fascination with China bashing is unlikely to grow support. Tone deaf harangues about vaccines earlier this year helped the Liberal Party more than his own. The Conservative brand is still a heavy burden to carry into a conversation aimed at winning young, urban and suburban centrist voters. But with policies aimed at helping gig economy workers—O’Toole is making a pitch that his recent predecessors weren’t really into.

For the Liberals, it may have been tempting to focus almost exclusively on the battle on their left flank—where the number of winnable votes is large and the philosophical differences small. However their path to another victory will require attention to the centre and the efforts by Erin O’Toole to present his party in a different light.