Federal election leaders debate: There's a hole in your platform

Justin Ling: O'Toole found himself on the defensive in Wednesday's leaders debate, pitching things that were nowhere to be found in his five-year spending document 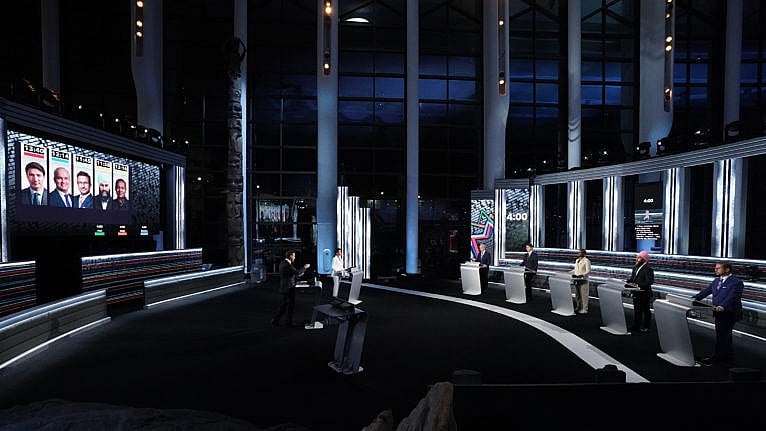 Here’s a riddle: Justin Trudeau’s got one. Yves-Francois Blanchet doesn’t need one. Jagmeet Singh’s is coming soon. Annamie Paul won’t have one. And Erin O’Toole’s got a big hole in his.

Give up? It’s a costed platform.

And at an over-produced, stilted all-leaders French-language debate on Wednesday night, O’Toole found himself pitching things that were nowhere to be found in his five-year spending document, which he released earlier in the day. What’s more, he found himself taking flack for it.

Liberal leader Justin Trudeau said the Conservative’s spending engagements are proof that O’Toole is “not delivering on any of the things that Canadians need.” Bloc leader Yves-François Blanchet chided the Conservatives for “dropping your platform two weeks late, and to changing it the next day.”

For starters, the Tories’ spending plan pitches an eye-watering set of deficits: A slightly-inflated $168 billion this year, $57 billion next year, $44 billion the year after, $26 billion the year after that, and $25 billion up to 2026. (Those dwarf even the Liberals spending shortfalls, but the Tories make up for that by recalculating the Liberals’ deficits to make them look bigger—which is certainly one way of doing things.)

But O’Toole doesn’t seem terribly afraid of spending more, and perhaps he shouldn’t. His platform costing does suggest that the budget will balance itself, thanks to a growing economy—so long as he can get spending under control in the long-term.

“Over the next couple of years, we are spending—to get businesses back on track,” O’Toole told reporters after the debate. “And to focus on the health and well-being of Canadians.”

The debate heard from one worried businessman, facing a labour shortage that is making business hard for many. O’Toole pitched his plan to reorient spending away from emergency aid—much of which was designed to help people stay at home during the pandemic—and towards support to get businesses hiring again, and paying more. A GST holiday, for example, would dump nearly $2 billion more spending onto this year’s budget.

O’Toole promised stable, dedicated, long-term funding by way of no-strings-attached health transfers to the provinces—something that won him accolades from Quebec Premier Francois Legault, who has loomed large over the Quebec campaign thus far. (As I wrote about following last week’s debate.)

Certainly, Progressive Conservatives in Nova Scotia just romped to an upset majority on huge health-care spending—proving that being centre-right on the political spectrum doesn’t preclude being concerned with a collapsing health-care system.

But O’Toole may have been hoisted by his own petard on that one: His spending platform reveals that the $60 billion he promised won’t be arriving for some time.

If elected, the Conservatives say they will increase the growth rate of health transfers to the provinces to six per cent per year. Yet, look at their spending document: They are proposing about $3.6 billion over five years, which is only about eight per cent higher than what the government will send to the provinces this year.

The Tories have explained that the majority of the $60 billion will be backloaded to the last five years—meaning they’ll need a second mandate to realize that spending. It also means O’Toole is going to have about $10 billion per year in additional costs to address, as he tries to balance the books: Not an easy feat.

And it certainly didn’t impress Blanchet. “It clearly is not what the provinces and Quebec are asking [for],” he said. “There’s a hole of $28 billion in his proposal, so it’s not something to be accepted.”

Trudeau, too, went after the spending engagements. “The health transfers that Canadians need now are all backloaded to seven, eight years from now,” the Liberal leader said.

But it’s a rather surprising line of attack from the Liberal leader seeing as, even if O’Toole’s health increases aren’t as advertised, they are still larger than the Liberal plan. That’s precisely why Legault spurned his one-time political bro, offering a de facto endorsement of the Conservatives.

But this will put O’Toole on the defense for a crucial time in the campaign. He continues to field attacks from all sides for his plan to rip up signed childcare deals with a majority of the provinces—Blanchet, particularly, went after the Conservative leader for “disappearing” $6 billion planned to expand access in Quebec’s subsidized system, which Trudeau had promised before the campaign began.

Perhaps the smartest of the lot is Singh who plans to unveil his spending engagements on Saturday—after the debates have concluded, and after early voting has already begun. While it may not be the most forthright position, it sure leaves him carefree on the debate stage.