Fighting fires is hard enough. Why are we making it harder?

Opinion A hotter, drier boreal forest means there's a higher risk of catastrophic wildfires. Yet there are no good new ideas—and no funding for better research 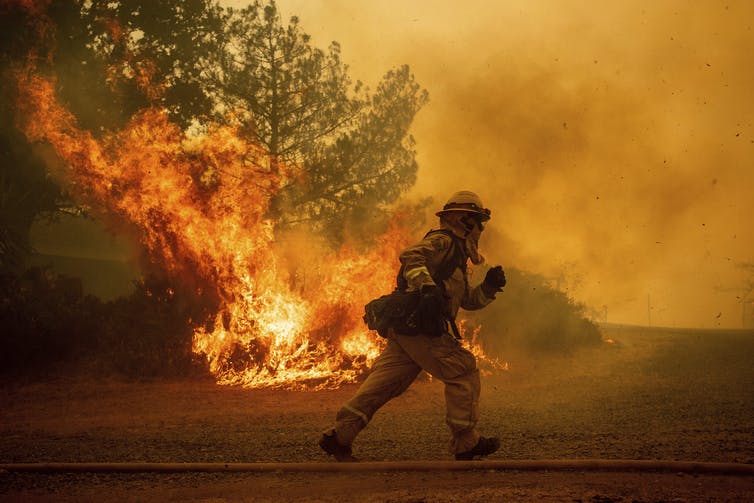 A firefighter runs while trying to save a home near Lakeport, Calif. on July 31, 2018.
(Noah Berger/File/AP)

Edward Struzik is a fellow at Queen’s Institute for Energy and Environmental Policy’s School of Policy Studies, at Queen’s University, in Ontario.

Shortly after my book “Firestorm, How Wildfire Will Shape Our Future” was published in late 2017, I received a flurry of invitations to speak about the challenges of dealing with fires that are burning bigger, hotter, more often—and in increasingly unpredictable ways.

The invitations came from all over, from Los Angeles to Whitehorse in the Yukon and from Campbell River on Vancouver Island, to Portland, Me.

I had serious doubts that anyone in Whitehorse would come out to hear me speak on a Saturday night in the dead of winter when it was close to -30 C.

It turned out to be standing room only.

The invite came from a group of concerned citizens, business leaders and the Yukon Science Institute. The attendees included homeowners, firefighters, emergency response personnel and Yukon cabinet minister John Streicker, who is responsible for the wildfire management division.

The discussion that followed my talk was heated at times, but it led to an open and frank conversation on how this boreal forest community, and others like it, might deal with wildfires like the one that engulfed Fort McMurray, Alta., in 2016 and those that are burning big in British Columbia this summer.

Investing in the future

More and more Canadian communities are signing up for the very sensible Fire Smart program, which promotes a variety of preventative measures such as forest thinning and the use of fire-resistant building materials to reduce the impact of fire.

Vulnerable towns like Nelson, B.C., are on the right track in developing evacuation plans and encouraging people to keep enough food and water on hand to sustain them for 72 hours. First Nations communities in B.C. are working with scientists like Lori Daniels to make their communities and forest-management zones more resilient.

But there are also a lot of poorly thought-out proposals being made.

Some residents of Jasper are pressuring Parks Canada to clear-cut the forests around town to form a fire break to protect it.

Across North America, the logging industry is lobbying governments to salvage the healthy trees and the partially burned ones that remain in a burned-out area. The rationale in this case is that a dead or dying forest has little value other than boosting a local economy.

There is a significant role for the timber industry in managing wildfire in the future. But a growing number of studies show that clear-cutting a burned-out forest is not the answer.

Fire is a natural process that makes forests more resilient to drought, disease and future fires. And it’s good for wildlife.

Woodpeckers, nighthawks and many species of owls thrive in burned-out areas. Elk and moose feed on the aspen shoots that rise up quickly after a fire. Grizzly bears and black bears benefit from the roots and berries that do well when a fire exposes the forest floor to sun and rain. Rivers and lakes tend to heat up in nasty ways when there are no trees to shade them and the cold-water fish they nurture.

There is also tendency to think that the best way of dealing with fire is to pour more money into traditional firefighting resources. When I spoke at the University of California, Los Angeles in April, many people in the audience called for more water bombers and irrigation systems.

While this helps, it’s not the whole answer. The only thing that is going to stop a big wind-driven fire that typically blows in from the east is the Pacific Ocean, Ralph M. Terrazas, the fire chief of the Los Angeles Fire Department, said during the question-and-answer session that followed.

What firefighters like Terrazas and others need are new or improved tools such as unmanned aircraft, better fire-risk maps, real-time warning systems, smoke projections for active wildfires and computer models that predict where the next fire might strike.

The ranks of these researchers, however, are small, and the funding for wildfire science in Canada and the United States is miserly compared to the generous amounts that are allotted to disaster recovery. In 2016, for example, the federal government provided approximately $300 million to Alberta to help Fort McMurray rebuild. More came from the province and Red Cross donations, which the federal government matched. All told, more than $600 million was spent fighting the fire.

This knowledge deficit and the shortage of new tried-and-true strategies are what is leading decision-makers and the public astray when it comes adapting to and responding to the new wildfire paradigm that is unfolding in our forests.

The fact that people want better wildfire management is a good thing.

What’s needed is a national wildfire strategy such as the one proposed by the Canadian Council of Forest Ministers several years ago. Many of the best recommendations made in a report commissioned by the council haven’t yet been implemented, including the need to invest in wildfire science.

What’s needed is funding agencies such as the Natural Science and Engineering Research Council to step in and identify wildfire as a priority issue for researchers.

What’s needed is for the FireSmart program to be accelerated with more funding from the provinces and territories.

And finally, what’s needed is for the federal government to restore funding for the Canadian Forest Service to at least 1990s levels, when it employed 2,200 people. CFS employs about 700 people now, and only about a dozen of those are wildfire scientists.

How can we expect to make progress on preventing catastrophic wildfires when we have a hotter and drier boreal forest than we had 30 years ago, and fewer fire scientists working to protect it?

FILED UNDER: firefighting The Conversation wildfires