Andrew Cash: The Ontario Labour Relations Board decision throws into question the status of workers on all platforms: Uber, Lyft, TaskRabbit, and more. And it opens a huge opportunity for the labour movement. 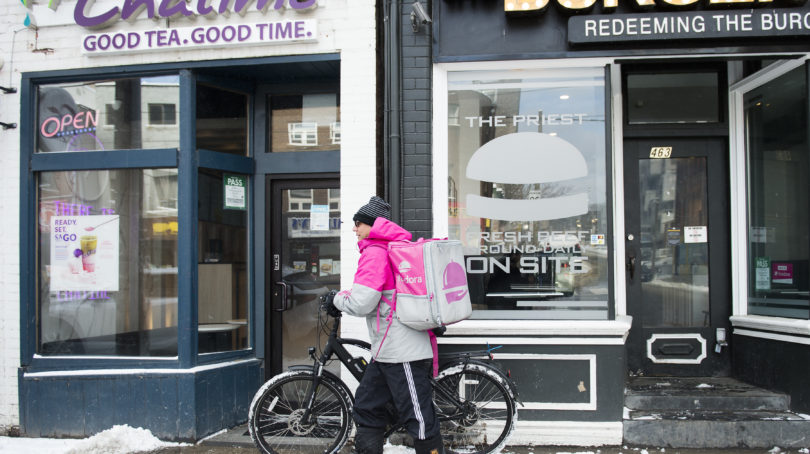 A Foodora courier is pictured as they pick up an order for delivery from a restaurant in Toronto, on Feb. 27, 2020. (Nathan Denette/CP)

Andrew Cash is the co-founder of the Urban Worker Project and the former Member of Parliament for Davenport.

You’d think it would be pretty easy to determine whether you are an employee of a company or not. For example, I am sitting at home at my desk this morning writing this article in my “before-I-take-the-kids-to-school” wear. This is one of many things I might do today or this month to cobble a freelance living. I’m writing on my own computer, I’m deciding when I write my stories, how long I spend on them, and well, what I wear to work. Seems pretty straight up. You can call me a freelancer, self-employed, or an independent contractor. But whatever you want to call me, one thing you can’t is anyone’s employee. That’s pretty simple.

Platform economy giants like Uber and Foodora love that kind of simplicity. They’ve made made millions based on the model that only independent contractors work on their platforms. That means no employees, no responsibility for workers (because hey, they have none), no unions, no problems. Ka-Ching! But along came an insurgent gaggle of scrappy bike couriers who teamed up with an also scrappy bunch of organizers from the Canadian Union of Postal Workers (CUPW), who were determined to make things less simple, at least for Big Tech.

Just last week they scored an unprecedented victory at the Ontario Labour Relations Board (ORLB), the reverberations of which could rebalance the North American power equation between massive, global app-based businesses and the low-paid workers they need to make all that dough. And in the process they may have unlocked the door to next generation unionism in the gig economy and showed how organized labour can play a crucial role in the future of work. Yup, it just got real…in a good way.

MORE: The gig economy keeps growing, but its workers are fed up

Last week the ORLB ruled in favour of Foodora couriers, agreeing with them; they were being misclassified as independent contractors by Foodora and should be classified as “dependent contractors.” Wait, what? Is that it? That doesn’t sound very revolutionary. Well, without getting into the weeds let’s just say that dependent contractor status gives the Foodsters (as the couriers call themselves) a sort of pseudo “employee” status. It doesn’t mean they can suddenly claim vacation pay, minimum wage protection and a sick day (they still get none of that). But it does mean one very important thing that Big Tech has successfully avoided until now: unions. “This is the first time gig-economy workers in North America have won the right to join a union,” says CUPW lawyer Ryan White. “This is a game changer.”

The difference between independent and dependent contractors can be vague. Generally though, if you use your own tools, set your own hours, are able to use surrogates to work in your stead, and you aren’t earning all of your income working for a single “client” then you are probably, like me, independent.

If, for example you have to report to a place of employment, you aren’t in control of your own hours or the way in which you work and you are using the employer’s tools, then you might be a dependent contractor or, as is the case with so many misclassified workers, an actual employee.

And that’s what Foodora thought. They argued that couriers are independent entrepreneurs. They own their own bikes, and bags after all. They can (sort of) pick and choose when they work. Hell, they can even work for a Foodora competitor at the same time they are delivering for Foodora. But there is one tool couriers do not own and have no control over and it happens to be a pretty big tool: the app itself! And couriers are dependent on that tool.

This suddenly throws into question the status of workers on all platforms: Uber, Lyft, TaskRabbit, and the list goes on and on. And it opens a huge opportunity for the labour movement. After having faced a 40-year onslaught, fighting multi-front battles for survival, the North American labour movement is bloodied to be sure. But it has also survived.

The Foodsters-CUPW collaboration could be a road map for the movement to take a big step into the gig economy. Unionism 3.0 if you will.  (Indeed the United Food and Commercial Workers are using the same road map working with Uber drivers). As one organizer told me, postal workers didn’t know anything about food couriers in the gig economy. They had to listen, trust them and let them take the lead. It has resulted in an unorthodox and creative campaign. But it also has all the hallmarks of union drives throughout history: constant organizing, mobilizing, patience and hard work.

Foodsters like being couriers. They are proud of their work. The just don’t want it to be so unstable, low paying and dangerous. They wanted to change that so they joined a union. And the union joined them.