For black women, The Handmaid's Tale's dystopia is real—and telling 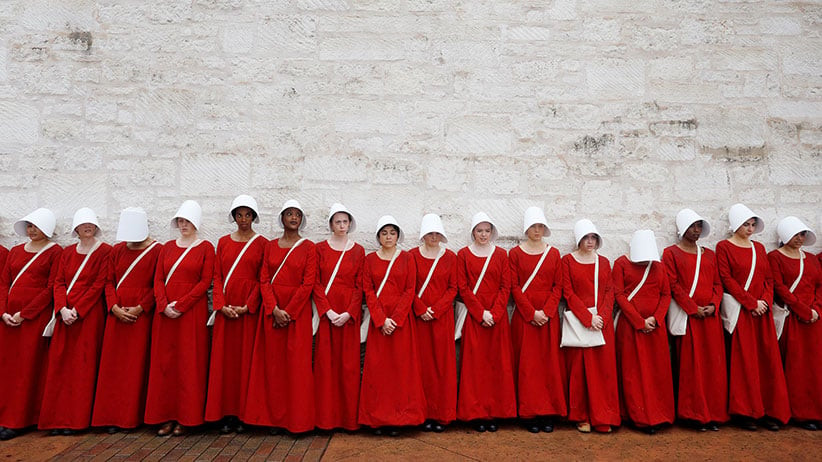 The Handmaid’s Tale, a Hulu-produced television show based on Margaret Atwood’s classic novel, has exploded in popularity. And between the book often being required reading in high school and the nasty women constituency of modern-day feminism eager for a show that speaks to them—in March, activists even protested anti-choice measures in Texas in Handmaid’s Tale garb—it’s little wonder the show has become a smash. The discourse around it has been enthusiastic, mostly focussing on two main themes: the modern resonance of the dystopian Republic of Gilead in the novel, and whether the story is a feminist one.

But these conversations are both misguided, led by mainstream, ahistorical and dangerous understandings of both oppression and feminism.

The book and the show are decidedly not in line with an inclusive feminism. But I can acknowledge its undeniable feminist themes centred on reproductive rights, subjugation, inequality and political disempowerment. And in Trump’s America, where Congress just passed a health care law that deems the Caesarean section to be a pre-existing condition, the show’s timing is uncanny. But as a matter of whether The Handmaid’s Tale constitutes a dystopian future, it doesn’t offer a vision of an America where democracy has collapsed. Instead, it shows white women subjected to the conditions under which their country was born. The thing that, tellingly, has proven the most alarming to audiences.

Recently, the National Post’s Barbara Kay penned a dismissive review of the show, reasoning that the series creates a gross caricature of Christianity and conservatism. Kay also dismissed the feminist core of the series, thinking it rather ludicrous that women could ever find themselves immiserated under the gender-based violence and captivity brought about by Republic of Gilead. But Kay need only look at the history of America, in which women did find themselves captive, were bred against their will, and were tortured and even killed for attempting escape. This, of course, was the reality for black women in America for hundreds of years, a period where it was nearly impossible for a woman to be born, live, and die of old age under a social system that deemed neither her body nor the fruit of her womb to be her own.

On this, Kay finds a sense of existential horror in the show—as do other reviewers who took a more positive view of the show—as the American government steadily encroaches upon the autonomy of women’s bodies. On the other hand, Kay believes her body is and will always be protected, to the extent she cannot relate to the story at all. But the central question in viewing this series seems to be this: “Could it happen to me?”

Progressive feminists see parallels between American conservatives and Christendom’s almost prurient interest in reproductive rights. As Kay writes: “Pious Christians are the last people on earth to dream up a system in which the state has control over everyone’s sexual and reproductive lives….” Both miss the facts of reproductive science in America, in which women of colour were subjected to painful and gruesome experiments to bring birth control and family planning to today’s generation.

Indeed, on the matter of whether The Handmaid’s Tale is a dystopian work, Barbara Kay is wholly incorrect. Of course it is. With birth rates in the West falling, immigration on the rise, and alt-right groups claiming that we are on the verge of “white genocide,” the idea of white women being resigned to the role of housewives and brood mares is the stuff of white supremacist daydreams. For women of colour, on the other hand, this is not dystopia. These are realities we have lived with. When Gregory Pincus developed the birth control pill, his obscene lack of ethics and inhumane treatment of his patients caused needless suffering to hundreds. It’s no accident that Pincus’s experiments targeted of the bodies of women of colour.

Elizabeth Moss, who plays the show’s main character Offred, caused a minor furor when she said The Handmaid’s Tale was not a feminist story, but a human story. Later on, she clarified that not only is she a feminist, but so is the series. What is clear is that she does not intend to upset the base audience, people watching the show to draw out feminist themes. The rest of the cast seemed to follow suit, and Atwood herself decided to infer that feminism needed clarification before conceding the work fits after she created a palatable definition: “When you say ‘feminist’ do you mean: Should women have the same rights as other human beings? Then, yes. But what else do we mean by that term? Do we mean women are angelically more perfect than men? Well, no. Women are human beings.”

MORE: A Donna Ferrato photo essay from the Women’s March

This blanket characterization of women’s rights as human rights, while not new, is lacking in nuance. What Atwood and Moss are getting at is a kind of “accidental feminism”—that is, one that just happens to be stirred by virtue of the fact white women are involved or affected by its reach.

The Trump connections to dystopian Gilead can be made easily. But what is to be made of the comparison? The Trump administration has no doubt offered the world a clear vision of totalitarianism, instilled fear, and poses a threat to a large majority of Americans. But new? Not for a great deal of women.

As usual, race has barely been mentioned in popular analysis of the series. In the age of the Women’s March, as well as the most visceral, public, bare-bones discussions of feminism we’ve had in decades, how can we even discuss feminism if for some, the story is dystopian, and for others, too real? The novel itself considered race in its exclusion of Black characters, calling them Children of Ham and deporting them to the imagined National Homeland One. This detail, and the implied desire for purely white characters in the show, was so important that the executive producer, Bruce Miller—upon deciding to cast Samira Wiley and other people of colour—had to have a discussion with Atwood about his decision to remove the white supremacy element of The Handmaid’s Tale in its TV adaptation. In an interview with TV Line, Miller aptly points out the stark similarity between making a television series about racists and making a racist television show.

White supremacy, weaponized to protect white women’s bodies, is not new. Liberal and conservative women have collectively struggled to acknowledge the ways in which mainstream feminism has served to undercut and erase the voices and struggles of women of colour. One of the central critiques of first-wave feminism was that it erased of women of colour. And even amid critique and consideration of third-wave and intersectional feminism, the way we talk and think about shows like The Handmaid’s Tale demonstrates that this erasure continues.