For Trump, Puerto Rico may be the last best test of his political word

Opinion: Past presidents have failed on Puerto Rico debt relief. But Trump may actually be well-suited—or, at least, should be most motivated—for the task 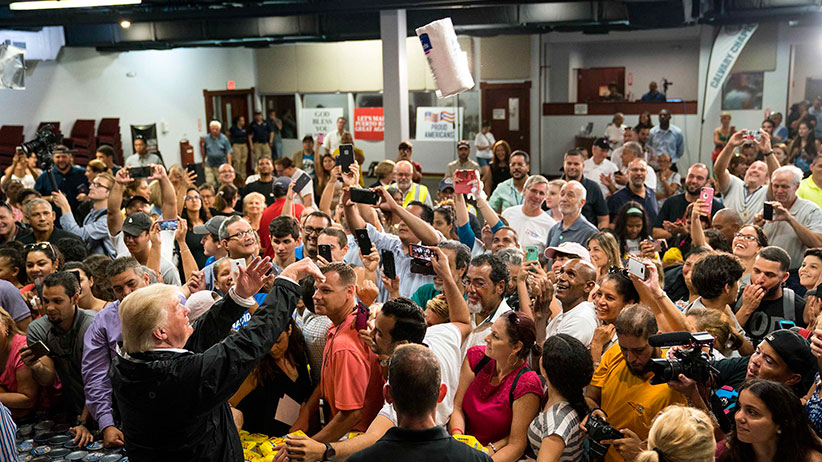 Jason Linkins is a writer who covers American politics and the media. He previously served as a columnist for The Huffington Post in Washington, D.C.

At this point, it’s hardly controversial to note that the average day in the never-not-making-news Trump presidency can often feel freighted with a week’s worth of psychic burdens. And for the White House, this last fortnight in particular has been something of a season of struggle. On one end, you have another failure to repeal and replace Obamacare. On the other, there’s a push for a tax reform package that’s proving to be a heavier lift than one might have expected with the GOP controlling all the levers of power.

It’s the same old story: President Donald Trump is failing to beat Washington at its own game—or at least failing to be the outsider dealmaker and pathbreaker he vowed to be on the campaign trail. As is his wont, Trump has dealt with these setbacks by deflecting his ire—as well as the starry-eyed attention of an eager press corps—onto enemies beyond the Beltway.

The media, of course, has taken its regular barrage of Trumpian rage; at this point, if Trump goes 24 hours without tweeting about “fake news” or the “lying media,” it’s cause for concern over whether he’s trapped himself in a broom closet. In recent days, Trump has padded out these outbursts, weighing in on the activism of black athletes and lobbing insults at North Korea’s dodgy dictator, Kim Jong-un. But he’s also found time to publicly spar with Puerto Rican citizens and their elected officials for all sorts of perceived faults and slights. All that effort has only earned him a media narrative in which his crass treatment of the beleaguered islanders has been front-and-centre on banner headlines and evening cable newscasts.

But then, something unexpected happened. In an interview with Fox News’ Geraldo Rivera, Trump said, “We have to look at Puerto Rico’s whole debt structure…They owe a lot of money to your friends on Wall Street and we’re going to have to wipe that out.”

And suddenly, Trump was interesting again. Forgive Puerto Rico’s debt? Why not?

MORE: Searching for sincerity in the spectacle of Trump

Well, we mustn’t get too far ahead of ourselves. If you want to talk about heavy lifts, few come heavier than than the island’s burdensome debt crisis—a toxic mixture of public policy choices that have limited Puerto Rico’s economic competitiveness while running up huge budget deficits and the teeming flocks of vulture investors who’ve circled in to pluck the carcass to the bone. With all these entanglements, there is—to put it charitably—no easy path to “wiping” it out, legislatively or otherwise.

Besides, while Trump may find it easy—even instinctual—to start spitballing about Puerto Rico’s debt problem while free-associating on television with Geraldo, sooner or later the president was going to find himself in the company of one of the many advisors he imported from Wall Street, none of whom would greet the idea with friendly favour. Indeed, by Wednesday morning, White House budget director Mick Mulvaney was walking it back in the now-classic style of everyone who’s ever debated whether to take Trump seriously or literally. “I would not take it word for word,” said Mulvaney. “We are not going to deal with the fundamental difficulties Puerto Rico had before the storm.”

If there’s a striking thing about Mulvaney’s comments, it’s how freely he depicts his boss as passive and out-of-touch, his occasional original ideas easily kicked to the curb. This is Capitol Hill sclerosis distilled to its essence, yet another rebuke to the theory that Trump presented on the campaign trail: that, for all his coarse behaviour, he would take on a system that had gotten bogged down in the conventional thinking of insider suck-ups. But in reality, Trump has more or less been nothing more than a lethargic spectator to events, railing at the system only when it fails to deliver some bill—any bill, really—that he can sign in the Rose Garden for the sake of pocketing a win. He’s spent more time in office reminiscing about how easy his past life was than he has busting the system, like he promised. And for all his talk about “draining the swamp”—and it’s an open question whether that was sincere, given all the avenues to self-enrichment he’s exploiting—it seems he’s sunk deep into the bog.

If Trump wants this to change, he needs to ignore the words of his swamp-monster budget director. Puerto Rican debt forgiveness may be the best possible war for Trump to wage at this exact moment—and, perhaps, the last great test of his political reputation.

For starters, much of the legwork has already been done. That’s great news for a president who doesn’t like legwork; Trump would be wading into the issue at a moment when significant momentum behind debt forgiveness has already been amassed. As the Intercept’s Kate Aronoff reported this week, “Ahead of Maria, the federally appointed fiscal oversight board now in control of Puerto Rico’s finances had developed a plan that would wipe out 79 per cent of the island’s annual debt payments, taking a massive chunk out of the payday hedge funds had been hoping to land from the island.” Now, the principal fight, currently playing out in U.S. District Court, is over who is going to take the larger haircut: Will it be the residents of the island or the bondholders themselves?

In his interview with Rivera, Trump never clarified who would be the intended beneficiary of his imagined debt “wipe-out.” But if his campaign promises are any guide (sure, sure, grain of salt and all that), this is precisely the sort of fight Trump said that he would pick—one in which he, as the billionaire class-traitor, would break the backs of Washington ditherers and Wall Street crooks. No other looming issue presents Trump with this opportunity to re-embrace his campaign’s brand of populism with as much resonance, relevance, and attendant political benefit. As Politico’s Marc Caputo put it, “If Trump delivers a wipeout of Puerto Rico’s debt and a fix to the island, it would have a Nixon-goes-to-China feel.”

You might remember Nixon going to China as the 37th president’s moment of cutting through the knot of conventional thinking. Or, as some might prefer to recall, as the one good thing the old crook ever did.

Well, if we can contemplate that sort of esteemed level of historical comparison, then it’s also possible to imagine Trump being showered in many lesser kudos from all quarters if he goes all in on stabilizing Puerto Rico, as he waits for presidential historian Michael Beschloss to properly sort him among the Great Men. For all of the enmity that Trump has sown with the press, he likely knows that his media antagonists are, nevertheless, constantly searching for an opportunity to declare Trump to be “presidential.” He’d earn these pleasing headlines by coming out in favour of debt forgiveness. For that matter, he would also gain some temporary alliances with lawmakers on the left side of the aisle, which would in turn tick that “bipartisanship-slash-independent leader” box that’s so important to Beltway touts.

And if Trump has made himself an enemy of Puerto Ricans—many of whom could, through displacement, become Florida swing-state voters in very short order—then there is no faster way for Trump to get himself out of arrears. Solving the debt problem is a pre-eminent issue for residents of Puerto Rico, as well as the island’s state-side diaspora. All of the stick that Trump has taken for his hurricane response would likely turn to praise if he took up this cause. One can easily imagine that Hamilton playwright Lin-Manuel Miranda—who only recently condemned Trump to “hell” on Twitter—would be singing a different tune if Trump’s White House was making debt forgiveness a daily issue.

Ultimately, the best reason to support some measure of debt forgiveness for Puerto Rico is that it is a helpful and just thing to do, especially in light of the crippling damage done by Hurricane Maria. Trump, of course, can’t be relied upon to pursue such just arrangements for their own sake, but he has nevertheless stumbled onto one which offers him the opportunity to do what he says he loves to do: battle America’s elites, disrupt Capitol Hill gridlock, and dominate his “haters.”

The truth is, Trump might not have a better opportunity lying ahead to prove that he can bring Washington and Wall Street to heel, using nothing more than the force of his personality and his outsider style, and after a series of high-profile busts in Congress, he alone has a chance to reverse the narrative before it ossifies. Naturally, he’ll be risking some capital on a venture that may not succeed. But even if he merely champions a Puerto Rico debt wipe-out, he’ll be seizing an issue with tremendous, media narrative-altering power.

In a way, putting Puerto Rico’s fiscal house in order would be a great way for the president to drain some of the red from his own ledger. And after all, you’d think that someone with Trump’s insight into the transformational power of discharging one’s debts would know the positives of this play.