For once, Canada didn't cave in to Huawei

Terry Glavin: By following the rule of law and arresting a Huawei executive Canada broke with its tradition of ignoring or embracing a known security threat 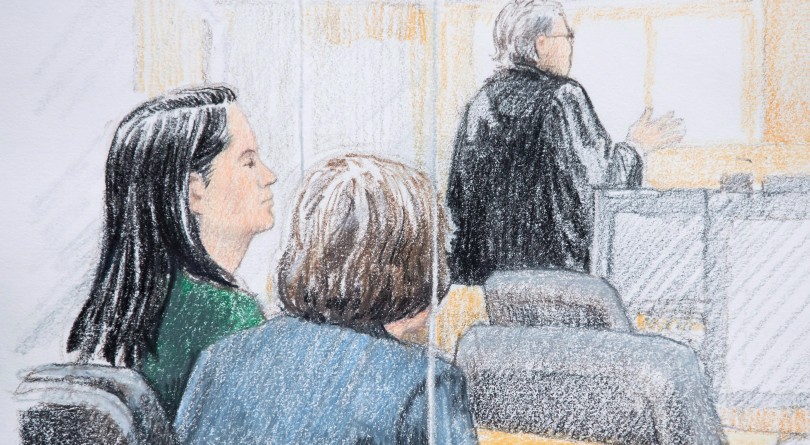 In this courtroom sketch, Meng Wanzhou, the chief financial officer of Huawei Technologies, sits beside a translator during a bail hearing at B.C. Supreme Court in Vancouver on Dec. 7, 2018. (THE CANADIAN PRESS/Jane Wolsak)

To get your head around what’s really going on with the ominous Vancouver arrest and detention of Meng Wanzhou, chief financial officer of Chinese telecom behemoth Huawei Technologies Co Ltd, it will help to be disabused of what the story isn’t about.

This is not merely a case of Canada being dragged into an unseemly trade-war street fight that has lately flared up between two belligerent hegemons, Xi Jinping’s China and Donald Trump’s America. Another stupidity making the rounds would have you believe that Beijing’s hysterical, spittle-flecked threats to retaliate against Canada can be explained away as a matter of the Chinese ruling class simply not knowing how things are done in countries governed by due process and the rule of law.

Beijing knows perfectly well that Canada is acting on a perfectly legitimate request from the U.S. Justice Department’s Office of International Affairs in accordance with the relevant terms of a long-standing, tried and tested extradition treaty. An evidence-rich Aug. 22 arrest warrant requires Meng to appear in a U.S. court to answer criminal charges that she committed fraud against U.S. banks by concealing Huawei’s connections to a Huawei proxy in Tehran that was doing business with Iranian telecom firms, in violation of U.S. sanctions law. She was picked up on a flight stopover at Vancouver International Airport.

Meng is the daughter of Huawei’s billionaire founder and president Ren Zhengfei, a former People’s Liberation Army officer with close ties to Beijing’s Communist Party bosses, so it only follows that Beijing would be attentive to her every need and worry. Meng also happens to have been a permanent resident of Canada some years ago, when she could be counted among the 30,000 or so Chinese wealth migrants whose quasi-legal deluge of investments in Vancouver real estate has played such a significant part in hideously distorting Vancouver’s housing market.

What distinguishes Meng’s case is that it is one of those rare occasions, if she is eventually found guilty of the charges against her, that a prison term may result from a conviction for evading sanctions specifically intended to isolate a belligerent police state. It is no coincidence that it was the Brooklyn U.S. attorney’s office that was undertaking the criminal investigation of Huawei, and issued the warrant for Meng’s arrest. HSBC, one of the main banks Meng is alleged to have conned into acting as a conduit for dirty Iranian money, was busted by the Brooklyn office back in 2012.

HSBC was fined $1.92 billion for laundering billions in drug money and conducting illegal transactions with Libya, Cuba, Sudan and Burma. Part of the settlement deal required a stringent monitoring of HSBC’s transactions over a five-year period. If the monitoring was effective, it would have picked up Meng’s sketchy dealings.

Controversially, settlement deals like the HSBC arrangement became the norm in the United States during the Obama administration. Trump carried it on in the deal his administration struck earlier this year with ZTE Corp., another dodgy Chinese telecom. Last year, ZTE pleaded guilty to selling American equipment to Iran, eventually paying $1.89 billion to get a total ban on its American business lifted. Just last month, the French bank Societe Generale agreed to pay $1.34 billion to settle sanctions-busting proceedings against the company involving 2,500 transactions with entities in Iran, Cuba and Sudan over a 10-year period.

Nobody went to jail in those cases, and that may be crude justice, but Meng’s appearance in a Vancouver courtroom last week was not a “show trial,” as the Communist Party megaphone China Daily ludicrously claims. It was a bail hearing, at which her lawyer offered up two occasionally-occupied Vancouver mansions as surety.

Neither was her arrest a “kidnapping,” as the Chinese commerce department bureaucrat Wei Xinyu claimed in the party-owned newspaper Global Times. In the most comically intemperate language, Chinese diplomats have demanded that Canada release Meng immediately, to assuage China’s “hurt feelings.” Over the weekend, China’s deputy foreign minister Le Yucheng threatened Canadians with “serious consequences” unless we do what we’re told.

They should all be told to pound sand, of course, but it is perfectly understandable that Beijing would feel free to take this sort of tone. Among the G7 countries, Canada has adopted a uniquely supine posture in its relations with Beijing and its legions of creepy billionaires. Unlike Canada, our partners in the “Five Eyes” intelligence alliance—the U.S., Australia, New Zealand, the United Kingdom—have not been slobbering on Huawei’s slippers all these years.

It was long before Trump came along that a bipartisan consensus had established itself in Washington that Huawei—beholden to the Communist Party as all Chinese corporations are, by law—posed a particularly serious national security threat. The Obama administration adopted strict measures to quarantine Huawei, and there’s nothing new about the Shenzhen-based conglomerate’s shady dealings in Iran, either. In 2012, Zaeim Electronic Industries, Huawei’s Iranian partners, listed Iran’s defence ministry, the regime’s intelligence branch and the terrorist-listed Islamic Revolutionary Guards Corps among its clients.

Australia and New Zealand are intent on barring Huawei equipment from their fifth-generation (“5G”) internet development. Only last week, British Telecom confirmed that Huawei gear will not be permitted in any of its emerging 5G technology. BT is already stripping Huawei equipment from core areas of its 4G networks following warnings from the U.K.’s cyber-security offices and MI6, the U.K.’s foreign intelligence service.

Japan is excluding Huawei and ZTE from public procurement, and last month the European Union adopted a draft law that would restrict Chinese investments in areas that impinge upon national security. “We are determined to keep our technology sectors and key infrastructure safe,” says Austria’s Margarete Schramboeck, who holds the EU’s rotating presidential office.

In stark contrast, Canada has welcomed Huawei with open arms, direct subsidies and tax credits, and in return, after having arrived in Canada only a decade ago, Huawei has deftly insinuated itself into the good graces of Canada’s political class. Huawei has embedded itself in research programs in 10 Canadian universities. Telus and Bell have both taken Huawei on as a partner in the development of 5G technologies. Huawei is now the presenting sponsor of Hockey Night in Canada.

Earlier this year, Jake Enwright left his post as Conservative leader Andrew Scheer’s communications director to take up a more lucrative position as Huawei’s director of corporate affairs in Canada. Long-time Liberal Scott Bradley, the Liberal Party’s candidate in Ottawa Centre in 2011, is Huawei Canada’s vice-president for corporate affairs. Bradley is also a director of the Canada-China Business Council (CCBC), which serves Canadian businesses in China as assiduously as it serves China’s business interests in Canada.

Huawei is one of CCBC’s “benefactor” members. Another CCBC director is former Liberal cabinet minister Martin Cauchon, who rather inauspiciously greeted news of the Ontario government’s $6.5 million gift to Huawei in 2011 with these words: “There is a saying that if you can’t beat them, join them.”

Canada has joined them, alright—despite the warnings of U.S. intelligence agencies, former Canadian Security Intelligence Service directors Richard Fadden and Ward Elcock, and John Adams, former head of the Communications Security Establishment, among many others. Over the weekend, Fadden said this about Huawei, on CTV’s Question Period: “I believe they’re acting as an agent of the Chinese state.” Public Safety Minister Ralph Goodale says hey, no worries, we’re monitoring Huawei.

There is a silver lining in this, however. Former Liberal deputy prime minister John Manley is not Canada’s foreign affairs minister.

Manley’s response to the hullabaloo in that Vancouver courtroom last week was to say Canada should have skipped the whole thing by employing some “creative incompetence” in the U.S. extradition request for Meng Wanzhou. “This woman was not residing in Canada, she was simply transferring flights in Canada, and we might have just missed her.”

So much for due process and the rule of law there, Mr. Manley.