For this 'hockey wife,' the Humboldt tragedy hits close to home

For years, Jessica Scott-Reid has seen her husband off as he boards the team bus—and knows firsthand how off-ice tragedy can shake people whose loved ones play hockey 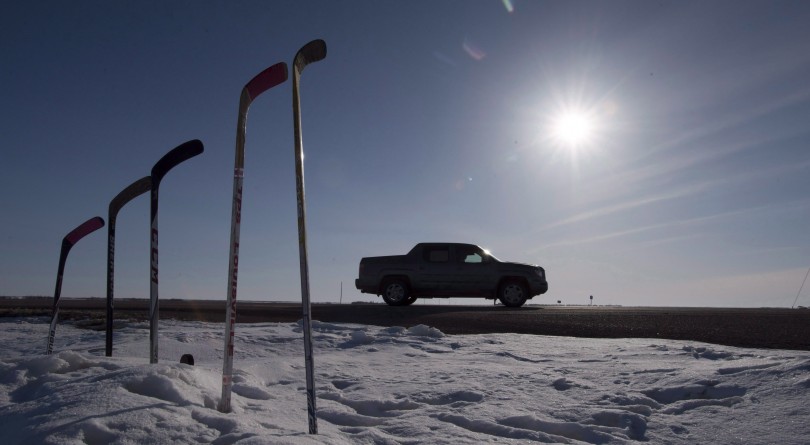 Hockey sticks to remember members of the Humboldt Broncos are silhouetted against the morning sun along a stretch of highway 6 in Saskatchewan, Friday, April, 13, 2018. Today there is a public memorial for 18-year old Parker Tobin, 20-year-old Jaxon Joseph, 18-year-old Logan Hunter and 21-year-old Stephen Wack, players with the SJHL Humboldt Broncos who were among those killed when the team bus and a semi-truck collided at an intersection in rural Saskatchewan. THE CANADIAN PRESS/Jonathan Hayward

I had just chatted with Robert Dietrich a week before he died.

I knew Robert—a young German with Soviet roots—from his time playing with my husband Brandon in Dusseldorf, Germany, two years prior. He congratulated me on our recent wedding; I had just officially become a “hockey wife.” We also talked about the upcoming hockey season, and how excited he was to now be playing in Russia’s Kontinental Hockey League, for a team called Lokomotiv Yaroslavl. He said to pass on a hello to Brandon.

A week later, the team’s plane crashed. The entire team was gone. He was 25.

At the time, my husband, born and raised in Montreal, was playing in the Swiss A League, for the Rapperswil-Jona Lakers, in a stunning Alpine valley just outside of Zurich. It was the most beautiful place to receive the ugliest news.

It took little time to make the connection that this was Robert’s team. When anything major happens in the hockey world, whether in Kamloops or Kazakhstan, the process of establishing degrees of separation is quick. Everyone knows someone. Everyone had a reason to be devastated.

There is an understood risk involved whenever a hockey player heads out onto the ice. For us families watching from the stands, it can be scary, but is an accepted part of the deal. But after the plane crash, a new risk suddenly became real that hadn’t existed before, one that had nothing to do with the game at all. Now, not only was there danger lurking in every game—we had to worry about them just getting there.

After the crash, the global hockey community rallied to show support. A group of fellow hockey wives created the Love for Lokomotiv fund, selling red and blue beaded bracelets to raise money for the families of the victims, who spanned across Europe and North America. It helped us feel like we were doing something. Really though, there was no getting over it. And when Brandon signed with CSKA Moscow two years later, those plane trips caused me great anxiety, every time.

But coping with such anxieties is just one part of being a hockey wife. There’s a lot more to the gig: how to pack up a house and fly off to another city within days; how to meticulously craft the important pre-game meal; how not to jinx a game by avoiding the words “win” or “shutout,” even when both seem likely; and, of course, how to swallow our worries and say goodbye as they step onto that bus, a sacred space that’s forbidden to anyone outside the team, including us. 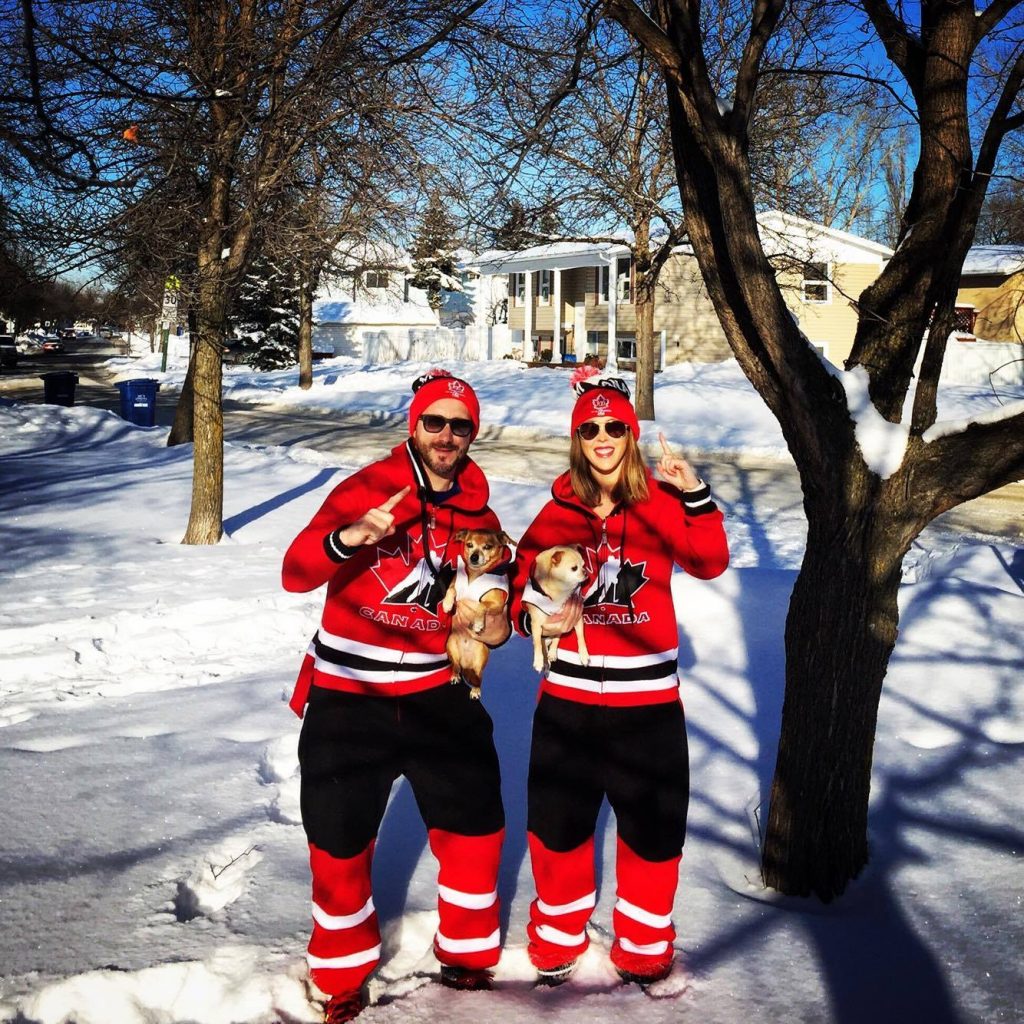 Brandon Reid and the author, Jessica Scott-Reid, in Winnipeg, in 2015.

In Europe—where my husband played for eight seasons following quick stints with the Vancouver Canucks, and where he travels by bus even today, criss-crossing Denmark as the head coach of the Aalborg Pirates—the bus is part of life for hockey teams, which have to travel as much as 10 hours to reach opponents’ rinks. For junior, university and American League teams back at home, trips can be even longer. The guys call it “the grind”—gruelling travel compared to their NHL glory days or their buddies’ plush lives, taking cozy chartered jets from city to city. But even though it may sound like a complaint, it’s truly a term of endearment: the grind is forged in long hours spent together, sparking the real magic of team chemistry.

There are special rules regarding the bus—some written, many not—that are passed down from vets to rookies year after year. “You don’t mess with a guy’s routine,” says my husband. “If a guy needs to sleep, you work around him,” he says, explaining the unique group precision required for each player and staff to fulfill their own pre-game ritual within the confines of the moving locker room—a dynamic not unlike that needed on the ice.

And just as the long hours and miles stretch ahead, so too do they stretch back, making the bus not only a space for preparation, but also contemplation, of all the games gone right and wrong. It’s where frustrations are aired and problems are sorted, where hierarchies are established and relationships are formed. And in the wake of a win, the bus is a space of fun, of victory beers and card games, of pranks and beaks, and of old hockey stories, shared and re-shared like folklore.

The team bus has long been a symbol within hockey culture of an authentic love for the game, for hockey at its purest. For a love of the grind.

It doesn’t make it easier, though, on the partners or parents who see off the people they love. We send them out onto the road just as we send them out onto the ice, blind to impending risk and unsure of how they will return: victorious or war-worn, strengthened or beaten. Our minds won’t accept that anything worse could happen.

So when the bus carrying the Humboldt Broncos junior hockey team crashed after colliding with a tractor-trailer on a highway in Saskatchewan—killing 16 people—the anxieties I’ve had to restrain since the Lokomotiv crash returned. Seven years after an entire hockey team plunged to the ground, and 32 years after the Swift Current Broncos’ bus flipped, killing four, the hockey community—all of which knows some form of the grind—has been left devastated once again. Horrifying images of the bus, surrounded by the splayed contents of the tractor-trailer, flooded our screens and our minds, our wholesome, familiar symbol sheared in half. Every hockey parent, partner, family across Canada and beyond could place their loved one on that bus, and the empathy was almost too much to bear.

As I write, my husband is packing up to head out onto the road once again, by bus, to game three of the Danish league finals. It should be an exciting time, but that excitement now shares emotional space with a sense of unease. Just as the Lokomotiv crash forever altered the hockey world, so too will this tragedy now change how we all move forward in this game. Now, as we send our loved ones off on the road, with renewed ache and apprehension, we will think of the Humboldt Broncos. Every time.

But our thoughts of Humboldt are not only shrouded in sadness. For out of such tragedy comes a new symbol to be added to the canon of hockey culture: that of the hockey stick placed outside the door, lit by candle, offering a beacon of hope from within the darkness. It is a symbol that says hockey is still at home here. No matter where we send the people we love, hockey is at home everywhere. And it always will be.