Four malignant questions about sexual harassment that keep getting repeated

Opinion: It's good that people are asking difficult questions post-Weinstein, but some carry a troubling undercurrent of doubt and resentment 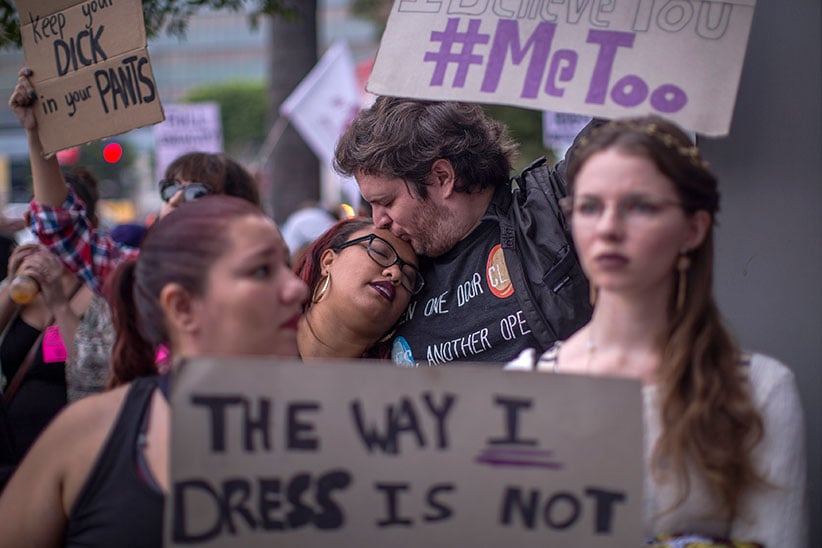 Imogen Grace is a Toronto-based actor and screenwriter, and the co-founder of the women in film organization The Bechdel Bill

If there is any silver to mine from the cloud of the recent Hollywood sexual harassment scandals, it is that people are asking important and complex questions. Questions that often come with equally complex answers.

Certainly the shock is overdue, but it needs to happen.

However there are other more malignant questions being repeated that carry with them an undercurrent of doubt and resentment. Though I believe they’re being asked in earnest, their true intention is to place the blame on victims.

If we’re able to spot them, though, these faulty questions may bring us closer to understanding the experiences of the victims of sexual harassment and assault.

The question: Are we allowed to make jokes like that anymore? I heard a version of this the other day on the television set where I work. A colleague made a lewd joke and the director said, hanging his head, “we’re not allowed to say stuff like that anymore”. He said it with such genuine and endearing confusion that I oddly found myself trying to console him.

The flaw: This sentiment, genuine as it might be, seems to say that this whole ordeal is absurd. Not that the actions of the accused are absurd, or the fact that they went on for so long and were so slimily covered up. But rather the presumed absurdity is that the victims came forward at all. If only they’d stayed quiet, we would be free to hug and joke innocently with nary a watchful, fascist bureaucrat to stop us. But it neglects to admit that any unfortunate social consequences we’re suffering are a result of the accused’s behaviour, not of the victims outing them.

The question: What if someone accuses me of sexually assaulting them? A friend asked me this the other night over burgers (the implication of course being that the accusation would be false). I had just given him the unfortunate news that Louis C.K. was also on the black list. So he tried to rationalize it away with fear and conspiracy.

The flaw: The suggestion is that these men’s careers were taken down randomly and without notice, like Pennywise jumping out from behind a hedge. It implies the allegations themselves could simply be a case of crossed-wires: Boy meets girl. Boy thinks girl likes him. Boy masturbates in front of girl. Girl accuses well-meaning boy of sexual harassment. This reduces the seriousness of the allegations, and undercuts the victim’s capacity for truth. A far more important question for my friend to ask could have been, “Have I ever harassed anyone?”

The question: Do I have to watch my back now? There is a growing resentment towards having to be careful, as if it were a new sort of punishment devised by women to be placed upon men.

The flaw: The assumption here is that men never had to watch themselves before, so they shouldn’t now. But this burden of being careful is not new, at least not for the 51 per cent. From the time a girl reaches consciousness she is taught to monitor her own behaviour. At two years old she is told to close her legs because she’s wearing a skirt. At twelve, she learns to hold her keys between her knuckles when she is walking alone. In this, and in thousands of ways that follow, the girl will hear she must watch her back. Now, the burden of carefulness is simply being shared.

The question: Am I still allowed to like Louis? This is part of our larger, collective mourning of celebrity and the work they create. Jaunty comedians, talented actors, visionary filmmakers, democrat (gasp!) politicians. We thought we knew them, and now suddenly we have to give them up.

The flaw: The question itself is not flawed, but it points to the larger experience of those who’ve been sexually assaulted. After all, don’t many women feel they know the men who harassed them? They’re the person we share a bed with. Our schlumpy friend with a wicked sense of humour. Our business partner, who we’ve been alone with happily ten times before. The moral quandary of whether or not we continue to enjoy Louis—or other products of the accused men—has many different, valid ways of responding. It’s not a quandary we asked for, or one we enjoy. But neither did those women in that hotel room as they sat across from their friend while he unzipped his pants.

We need to keep asking questions. But before we ask them, we must know our intention. Is it to stir up doubt and place blame on the people who have stepped forward? Or is it to start the tough and messy work necessary to reform our personal relationships and our system at large?