From a granddaughter to her zaida: 'The greatest storyteller was always you'

Before You Go: Hannah Ziegler on the unshakeable legacy of her Holocaust-surviving grandfather, whose memory is destroyed—but whose stories will live forever 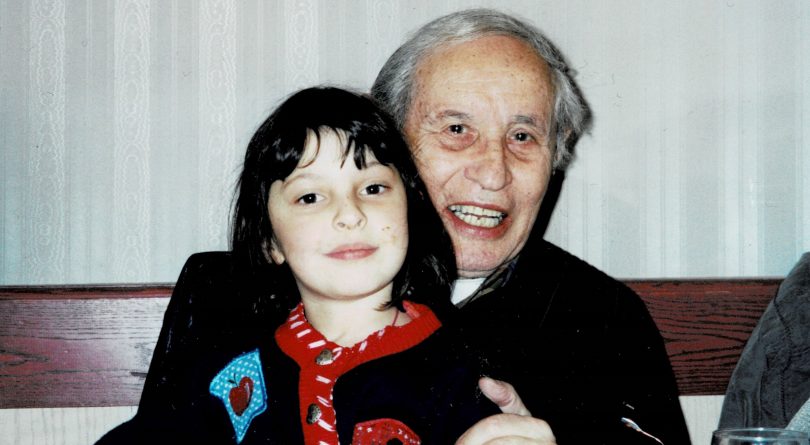 Hannah Ziegler with her grandfather, Roman Ziegler. (Courtesy of the Ziegler family)

You were known, above all, for your impeccable memory. You had the ability to rattle off stats and facts and languages you had picked up 50 years earlier. You could grab a story out of your back pocket as a party trick. You brought laughter and an overwhelming sense of joy to every person you encountered. And as you move through life now not on foot but by walker or wheelchair, you continue to do so.

Admittedly, as a child I found you a bit intimidating. You were sterner than my soft, affectionate Bubbie. Stubborn, even. Friday-night Shabbat dinners began at sunset and not a minute sooner. Your uniform consisted primarily of slacks and dress shirts done up all the way. You spoke sparsely, and mostly of your experience as a Holocaust survivor—to our family, friends, students at high schools and anyone else who would listen.

You passed on your love of reading as you handed me a book from your shelf every time I would come over. Treasured hardcover copies of The Wonderful Wizard of Oz, Harry Potter and Just So Stories provided my bookish young self an escape from reality, and nurtured my passion for writing. But the greatest storyteller was always you.

In 2016, Alzheimer’s crept in faster than we expected. We became concerned about how you were forgetting names and dates. Detailed stories of time spent in German concentration camps and your family—whose spirits you kept alive despite all of them being killed in the war—became mumbles and mix-ups. It made everyone sad and you, frustrated. What happens when self-sufficiency comes to a halt? What happens when you forget everything that makes you who you are?

You no longer showed us your curated tchotchkes and government recognitions, behind glass and framed. You moved to a home. Now you have nurses to care for you. It took time for everyone, including you, to adjust, but this is the new normal and it’s for the best.

Last year, a photo of a Holocaust survivor outside a synagogue near my house was defaced with anti-Semitic graffiti. On a larger scale, someone opened gunfire at a synagogue in Pittsburgh, murdering congregants during their Saturday-morning service. The tragedies keep coming, and I wish I could talk to you about them. But I know it might just make you outraged or confused—and then you would probably forget.

I am not deeply religious and do not feel connected to prayer in the same way you do. But a particular prayer resonates for me because of you.

During Passover, the eight-day Jewish holiday involving ritual feasts called “Seders,” you upheld a family tradition. As we reached a certain point in the long night of blessings and wine and a big meal, you would pull out a typed essay to read aloud. “We can all recite this story by heart!” we exclaimed. But that was the point.

You detailed a cold winter’s night—New Year’s Eve, to be exact—at an incredibly harsh forced-labour camp in Silesia when you were woken up by drunk German officers and told to march outside. You and your bunkmates, frozen and nearly hopeless, began to sing “Vehi Sheamda,” a Hebrew prayer signifying triumph.

Visiting you early last year at your seniors’ home, you hummed and softly sang this song the way you used to, beaming.

You turned 91 in November. Your memory may be destroyed, but nothing can take away your legacy of pride and love.

FILED UNDER: Before you go Editor's Picks noads Passover