From a social distance, there is comedy

Tabatha Southey: It’s impossible to imagine what this experience would be like without the internet. We are bonded by distance, our Tweets and TikToks and even our Reddit posts are the glances we exchange. 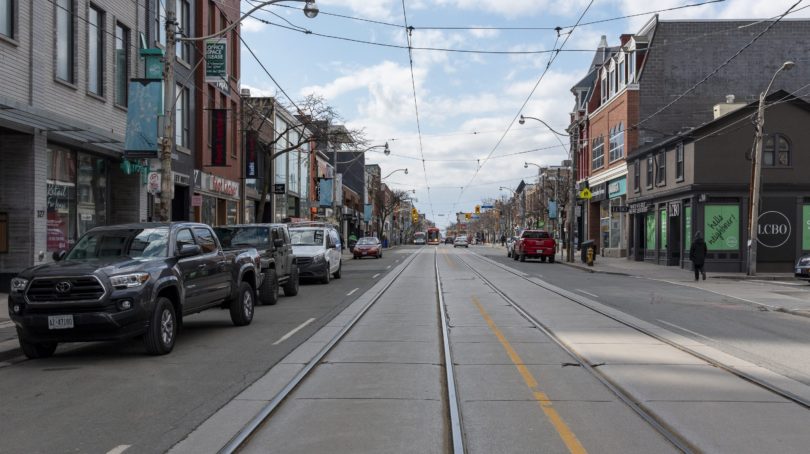 A normally busy Queen Street West in downtown Toronto is largely empty due to many closures related to COVID-19 preventative measures in Toronto, Ont. on March 17, 2020. (Dominic Chan/CP)

It seems years ago now that I noted how I had found myself feeling intensely socially bonded to all the people I had not shaken hands with in the week before.

Each time, our eyes met in a glance of vague and slightly foolish-feeling regret, as our hands performed just a hint of a helpless flutter. In that “let’s not” split second we, strangers, confessed to each other our anxiety for ourselves and expressed our deep concern—love, even—for others. We were intimate. We were on the cusp of something together, we believed, and it’s likely none of us have ever been more right.

That was March 10. I was out and about then. Washing my hands a lot, walking rather than taking the streetcar, waiting in the hallway, not in the crowded office, but still going out of my way for the chance to stand in line at my favourite bakery. That I stood behind, right behind, a living unknown body, moved through my city in that way, seems like one of those dreams where you can breathe underwater. That was me, AquaTabatha of Atlantis, less than a month ago.

A side effect of quarantine is the distortion of time. Time spent at home, unbroken by even a trip to grab that little finishing touch for dinner, moves slowly. Each day bleeds—no, bleeds is too violent for this kind of temporal acquiescence—cedes to the next, and yet as the occurrences around which many of us form our lives have been cancelled, one by one, events, those larger markers of time, have moved at a breakneck pace.

I have it ever so easy as far as self-quarantines go. First of all, I am not, by any stretch of the imagination, an essential worker. As we self-quarantine, remember that being obliged to do so is a luxury.

I hope as we buy groceries or pick up a bottle of wine or take a mail delivery in the years to come we will remember who was essential and not fret so much about paying them accordingly. Second, I always work from home and so my work life is pretty much unchanged. Social media suggests that many of you took a week to learn that you should wear pants. Again, please think of the mail carrier.

Mostly, I have, in many ways, been prepping for this for much of my life. I am a nest-featherer by nature. I like being home. Anyone scrutinizing my cart at Costco on one of my bi-monthly trips would have thought I was hoarding years ago. I raised two children on my own, from the time they were very young, and I always sought to avoid urgent trips to buy anything because, odds are, it would involve a lot of, generally very involved, snowsuits.

By an amazing coincidence, I gave birth to the two people in the world I like best. There are four of us holed up in the house now, and quarantine is hardly joyless. We laugh a lot. We talk a lot. I am impressed by the knowledge of statistics, pulmonary health, Canada’s demographics and medical ethics demonstrated by my children as they debate: would Mum get a respirator?

One small tip I can offer for this long haul ahead is that if you have teen or preteen offspring in the house, by all means let them stay up until 4 a.m. and sleep until past noon if they want to. They’re right. They need a little space. They’ve got this figured out. They’re basically timesharing the house. Let’s all just be kind.

I cook a lot and contrive to get food into the house almost as much, struggling with swamped and crashing websites for hours as I work to maximize my food-time-to-outside-time ratio. I’m not complaining at all. This is my World of Warcraft. I do this endless prep and procuring because, it turns out, an army also does eff-all on its stomach.

RELATED: A reminder from Hell that saving lives will save the economy

I believe my sourdough starter, which I am now feeding twice a day and checking on at least three times that much, is starting to feel a little smothered. Yes, there are active bubbles on the surface. They are spelling out, “Can I help you with something? I would like some sourdough ‘me time’ if that can be arranged.”

I take what I am given in a grocery order, gratefully. I have always held a top-tier level of respect for the mothers of those Donner Party survivors who said that somehow their mothers got them through that winter without ever feeding them human flesh. I am hoping to do the same thing now with my children and no-name mozzarella.

Overall, self-isolation is not unlike what I recall of living in Los Angeles. One can go out, but it’s always a big production and everything either feels closed or there is a lineup to get in and only total freaks come within eight feet of you.

What’s absent now from drained and yet still-too-occupied Toronto is what I love most about big cities. I miss the constant flow, reaction, flow of all of us, all those fairly unremarkable elements coming through the streets. Gone is the energy that comes of that. Cities are my battery.

It’s impossible to imagine what this experience would be like without the internet. Not just because of the information one can access and assess, and please keep doing that, but because we are, so many of us now, arrested in that exact moment of not shaking hands, and will be for some time to come. We are bonded by distance, our Tweets and TikToks and even our Reddit posts are the glances we exchange.

I see so much music and compassion and most notably comedy on display, in the best possible way. Much of it just left there, almost like a dead-drop, in some hidden corner of the web, where it is trusted we will find it, as silently arranged, and some plan for escape, some scheme to get our people safely out, will be made.