Go on and golf

Max Fawcett: Golf, for all of its sins, is a low-risk activity. It may well be the perfect sport for an environment where social distancing remains a necessity. 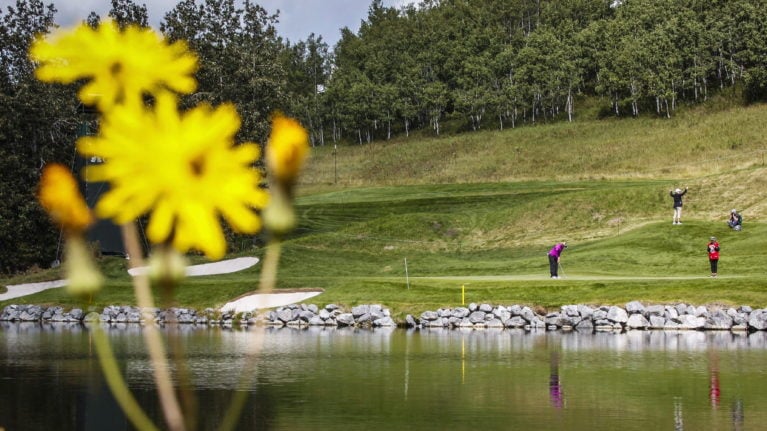 Some golf courses in British Columbia are open or about to open, Alberta's golf clubs want to do the same despite the reluctance of provincial health officials to give the green light. (Jeff McIntosh/CP)

Golf, as former U.S. President Woodrow Wilson once said, is war fought with weapons ill-suited for the purpose. But right now, as golf courses across the country start to re-open, there’s war of a different kind being fought about the game. Golf, and golfers, have become a proxy for the way that COVID-19 is exacerbating our existing inequalities—and an outlet for the building frustration that everyone has with the current state of affairs. In this environment, defending the game of golf and the right of people to play it can feel a bit like an intellectual suicide mission.

If you share the same unfortunate affliction as me, you don’t need an explanation of why golfers have been so determined to get back on the course. And if you don’t, there’s probably no explanation I could provide that would change your mind. That’s particularly true given the way the game’s image has deteriorated over the last few years.

When he was elected President, Donald Trump became golf’s unofficial ambassador to the world, and his incompetent and increasingly lethal response to the virus isn’t going to make it any more popular. But even back when Barack Obama was America’s most powerful golfer, it still suffered from its longstanding association with privilege, elitism and discrimination. And when golfers say things like “it’s hard watching a member carrying his own clubs from the car,” as Rob Larocque, Bear Mountain’s director of golf, told the Globe and Mail recently, it’s not hard to understand why so many non-golfers are openly hostile towards the game.

Golf courses are taking a number precautions, from raising the height of the cups to closing clubhouses, to ensure that social distancing protocols are respected, but these are the tiniest of sacrifices in a world that is defined right now by far bigger ones. Thanks to COVID-19, people’s children are missing a huge chunk of their educations (something that they may take years to recover from). Careers are being interrupted, and in some cases completely derailed. And families can only worry at a distance about loved ones who are most at risk from COVID’s worst health outcomes. When compared to those sorts of concerns, speaking up for the interests of a group of mostly-privileged people wanting to chase a little white ball around seems almost profane.

But even so, I still think it’s worth doing. That’s not because those mostly-privileged people need the help, but rather because there’s a broader reality that affects all of us here that’s at risk of being missed. Absent a vaccine, which is still more a hope than an expectation, we’re going to be doing this dance for many months—and maybe years. Getting through the fog of COVID-19 is going to be hard enough without each of us running interference on whatever happiness others might be able to find. And the more aggressively we police each other’s behaviour, the more we risk people refusing to buy into the necessity of things like social distancing.

Golf, for all of its sins, is a low-risk activity. It may well be the perfect sport—okay, game—for an environment where social distancing remains a necessity. And golf courses offer an important opportunity for physical and mental stimulation for Canada’s seniors, who may not be able to participate in more strenuous activities like cycling or jogging. It’s not a zero-risk activity, but few things that involve us leaving our homes right now are.

MORE: How can we do sports in isolation?

What matters is finding low-risk opportunities to engage in recreation and activity, and a growing body of research suggests that it is nearly impossible to contract COVID-19 from being in close proximity to someone who has it when you’re outdoors. According to Dr. Bonnie Henry, British Columbia’s Provincial Health Officer, “the risk that somebody who is sick spreads this virus from coughing or sneezing outside and you walk by them very quickly, even when it is within six feet, that risk…would be infinitesimally small.”

That’s why, as the Globe and Mail’s Andre Picard argued recently, it’s time to go outside. “As the pandemic curve flattens, the public needs to be rewarded for its sacrifices,” he wrote. “We need to ease out of confinement with thoughtful deconfinement measures. The best place to start is the safest, by easing restrictions on outdoor activity.”

Golfers, for their part—okay, our part—need to earn the opportunity that we’ve been given. That means being hyper-vigilant about respecting social distancing on the course, and suppressing any inclination we might have to complain about the pace or style of play. We’re lucky to have the chance right now to do the thing we love, given that so many people aren’t able to do theirs. But we should all try to be a little more patient with each other, and cut strangers more slack than we’re used to. The hardest part may be over, but the longest one is just beginning. We’re going to need to pick our battles carefully if we’re going to come out the other side intact.