Opinion: Canada shouldn't ignore its own gun-violence problems, from rising rates in our cities to inadequate government support 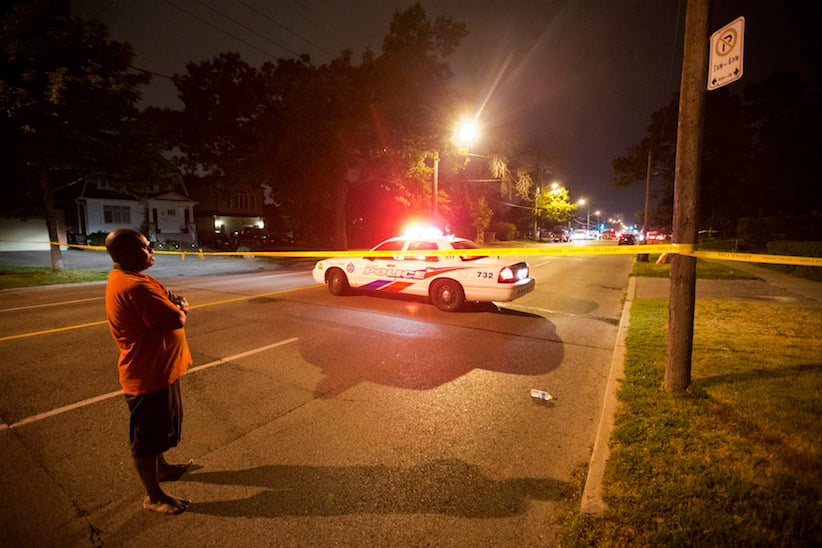 A man watches on at a crime scene following a shooting in Scarborough, a suburb in east Toronto, July 17, 2012. Two people were killed and at least 19 injured in a shooting at an outdoor party in Toronto, police said on Tuesday. (Mark Blinch/Reuters)

Angela Wright is a writer and public affairs professional. She holds a master’s degree in history from the University of Iowa and is an associate with the Toronto-based Zero Gun Violence Movement. Follow her on twitter at @angewrig.

Many Canadians woke up on Monday morning to the horrific news that more than 50 people were killed in Las Vegas; it was the worst mass shooting in modern American history, and the 35th one in 2017 alone. But while Canadians are caught up in the shock of yet another high-profile shooting in our neighbour to the south, gun violence across many Canadian cities has exploded over the past few years, too. Many of the country’s mayors and police chiefs are scrambling to address this problem, but a lack of available current data, as well as a lack of concerted effort from federal and provincial political leaders, has made tackling this issue arduous. Mass shootings in America should serve as reminders that Canadians shouldn’t be so smug as to believe that we’re immune to such issues.

The idea that Canada has a gun problem isn’t new. In his 2016 book, The Way of the Gun, Iain Overton cautioned against comparing Canadian gun violence to U.S. gun violence. Certainly, when comparing ourselves to America, we seem fine—between 2009 and 2013, the United States had 56,000 gun homicides, while Canada had 977. But when comparing Canada to the 31 countries in the European Union, he wrote, Canada has the fourth-highest gun homicide rate—behind France, Germany, and Italy.

MORE: The NRA is wrong—real life is not an action movie

Despite this and the persistently high rate of gun violence in many Canadian cities, gun violence still isn’t treated as a serious problem here. And when it’s discussed, much of the attention is focused on the city of Toronto. That’s not unreasonable; as of Oct. 2, Toronto has endured 297 shootings—an average of one shooting every day—which left 434 victims with varying degrees of injury in their wake. In terms of absolute numbers, no other Canadian city comes close to the number of shootings and shooting victims, and shootings in Toronto increased 41 per cent between 2015 and 2016; this year’s numbers are on par with the previous year’s, too.

But when year-over-year changes in gun violence are taken into account, there are other Canadian cities whose problems are at least just as bad.

Local officials in Surrey, Edmonton, Calgary, Regina, Ottawa, and Halifax have all publicly lamented the rise of gun violence in their cities, and with the absence of provincial and federal support, they have found themselves scrambling to implement their own initiatives.

Confidence in the federal government’s ability to tackle gun violence in Surrey, B.C. is so low that many residents have contemplated severing ties with the RCMP and setting up their own municipal police force. Surrey Mayor Linda Hepner recently announced the city would be creating its own task force to address gang and gun violence.

Halifax Regional Police, meanwhile, created an in-house research coordinator to study gun violence after the city experienced a particularly violent 2016. In June, the Canadian Public Health Association hosted a conference in the city in hopes of employing a public health approach to end gun crime.

What’s worse, too, is that while statistics for individual cities are available, there is no standardized method for displaying these statistics; each police department tracks different figures, and not all departments track shootings and gun homicides separately. For all the criticisms of its gun-crime rate, Toronto is a leader in readily available and publicly accessible data on shootings and gun homicides. The Toronto Police Service’s open data portal allows visitors to view shootings by month, year, injury level, and police division.

The federal government has allowed this issue to languish for far too long. This, however, is not for want of information and research; Public Safety Canada produced a series of reports tackling youth and gun violence, illegal firearms markets, and strategies for reducing gun violence.

The problem: the reports were released in 2007 and 2010, and are now woefully outdated. Both the report on illegal firearms markets and youth and gun violence are listed as “archived” on the government’s website; an “archive” is government lingo for a report that is too old to be of value and is no longer being updated or maintained. While a third report, entitled “Strategies for Reducing Gun Violence”, is listed as active, it refers to data from the mid-1990s and is riddled with broken web links.

Given the rise in gun violence in the past few years, one wonders what might have happened had the government followed through on its strategies and continuously released progress reports; the government provides ongoing financial support to the Investments to Combat the Criminal Use of Firearms, but the 2010 report evaluating this initiative has also been “archived.”

There may be evidence that Public Safety Canada has finally woken up to this serious issue. As part of its 2017-2018 strategies, the department highlighted the control of firearms as a main factor in its security agenda. Ralph Goodale, the public safety minister, even assembled an advisory committee on Canadian firearms to assist him with this.

But access to information about this committee has been heavily restricted. Its deliberations are held in secret and only the chair can speak on behalf of the committee. What’s more troubling is that the committee is only mandated to meet in-person once a year, and of the maximum 15 seats, only 10 have been filled. Key stakeholders who would bring valuable expertise to the discussions—community workers, ex-offenders, and victim services, for example—have been left out entirely. These are the people most directly impacted by gun violence and should be an integral part of the discussion if the minister is serious about curtailing gun violence.

This new committee is not enough. Goodale should meet with his provincial counterparts to tackle escalating gun violence. Provincial ministers can then host meetings in their respective provinces where they invite mayors and police chiefs of major cities as well as other important stakeholders, including representatives from communities with a high prevalence of gun crime.

These meetings should be driven by a single question: how can a country with strict laws on purchasing and carrying firearms see such an exponential increase in gun violence over the span of a few years?

Comparing gun violence to other countries isn’t essential in order to see Canada has a serious problem. When mayors and police chiefs in diverse cities like Surrey, Regina, Calgary, Edmonton, Halifax, Ottawa, and Toronto have publicly spoken about their struggles to grapple with rising gun violence, there is a problem. And this problem should elicit the same horror amongst Canadians as mass shootings in cities faraway.