Harjit Sajjan: To our soldiers and veterans, please know your sacrifices are not in vain

Op-ed: In Bosnia and Afghanistan, Canada's defence minister has heard brave soldiers question their sacrifice. So let's thank them, and their families, for their service 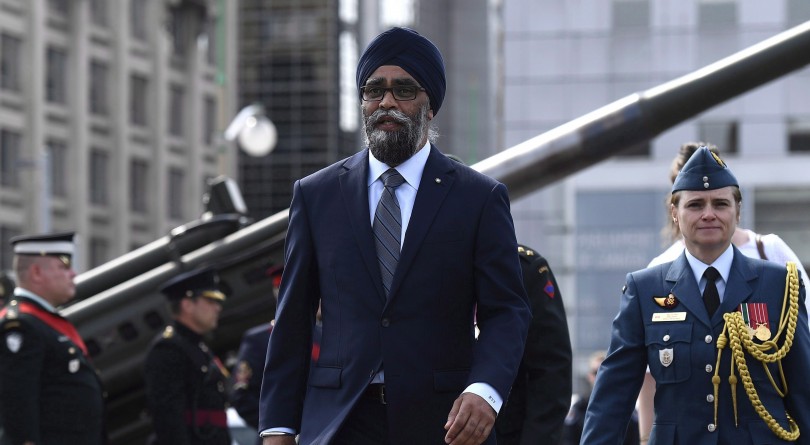 Minister of National Defence Harjit Sajjan arrives for a change of command ceremony on Parliament Hill in Ottawa on Monday, July 16, 2018. (Justin Tang/CP)

Harjit Sajjan is the current minister of national defence and the member of Parliament for Vancouver South.

As we mark the 100th anniversary of the end of the First World War, this Remembrance Day is a significant time to reflect upon the sacrifices and contributions of our brave women and men in uniform. As Canadians, we must take this moment to ask ourselves how we honour those who defended our freedom and the values we cherish.

The Canadians and Newfoundlanders who fought in the First World War, along with all of our women and men who have served in armed conflicts, have earned our highest respect for the sacrifices they made on our behalf.

One such Canadian is Private Buckam Singh, one of my personal heroes. Pte. Singh came to Canada in 1907 at the age of 14. He worked as a miner in British Columbia and went on to serve our country with the 20th Canadian Infantry Battalion in the First World War. After he was wounded in two separate battles, Pte. Singh succumbed to tuberculosis while recovering from his injuries. He was just 25 years old.

Pte. Singh came to Canada for a better life. He believed in the opportunities that Canada would provide him, and when it came time to defend those opportunities, he answered the call. He never got the chance to live out his dreams. This is the harrowing truth for all those who sacrifice their lives on the battlefield.

READ MORE: Search our database of fallen Canadians in WWI

I also think of those who led our troops into battle, like Lieutenant-Colonel William Hart-McHarg, a prominent Vancouverite who served our country overseas as the Commanding Officer of the B.C. Regiment. As a lawyer who often defended some of the city’s most vulnerable people, he was a well-respected member of his community. When the call came to defend his country, he enlisted without hesitation. In the course of his service, he lost his life at the Battle of St. Julien, leaving his family behind. Like Pte. Singh, he too made the ultimate sacrifice.

When I think of Lt.-Col. William Hart-McHarg, Pte. Buckam Singh, and the many others who fought for Canada, I think of the horrors they faced. I also think about the thoughts that must have crossed their minds. I am certain that just like every soldier, they asked themselves: is my sacrifice worth it?

READ MORE: Why Maclean’s is honouring exactly 66,349 Canadians who died in the First World War

After a difficult day on the battlefield under unimaginable stress, or returning to camp without a fellow soldier, one cannot help but ask: is my sacrifice worth it? I have heard that question from those I served alongside in Bosnia and Afghanistan.

When you deploy as a soldier, and leave the comforts and familiarities of your life back home, the small things that most of us take for granted become stark reminders of how fortunate we are to call ourselves Canadian. Simple daily activities, like watching the snow fall, or grabbing a hot coffee on the way to work, become distant luxuries. Our days are filled with hundreds of small acts like these, and while they may seem trivial, once you dedicate yourself to serving your country at war, you realize how significant these moments truly are. When these moments are no longer part of your daily life, you ask: is my sacrifice worth it?

We can answer this question for them. One of the best ways we can honour the sacrifice of the women and men who have fought for us is to lead a meaningful and fulfilling life. We should all take time to savour the small things, and harness the opportunities we have been given to succeed. This also means contributing to our communities, and working hard to improve them to create better lives for the next generation. We each have unique talents, and by being the best versions of ourselves, we can show our veterans that their sacrifice was not in vain.

When you see a veteran on Remembrance Day, or any day, thank them. Thank them for their sacrifice and for their bravery. Thank them for giving us the opportunities we have today. They fought for our future so that we could have a better life.

I also ask you to thank their family members. Every military family makes a sacrifice when their loved one deploys. Birthdays are missed, and weeks can go by without hearing their voice. Words cannot describe the sense of fear and loneliness that family members experience when their loved one deploys. There is always the fear that they might not return or that they will be a different person when they do. Just like our soldiers, we owe military families our support and gratitude. We honour their contributions as well.

This Remembrance Day, I ask all Canadians to join me in thanking our soldiers, past and present, and their families. I ask each of you to think about how you will use the opportunities they fought for to honour their sacrifice.

To our military members and your families, Canadians want you to know: your sacrifice is worth it.

We will always remember you.