Has coronavirus become a pandemic?

Timothy Sly: We don't know if COVID-19 will slow during the summer months. If it does, be ready for at least a second wave in the fall, following the path of the 1918 influenza and the 2009 influenza. 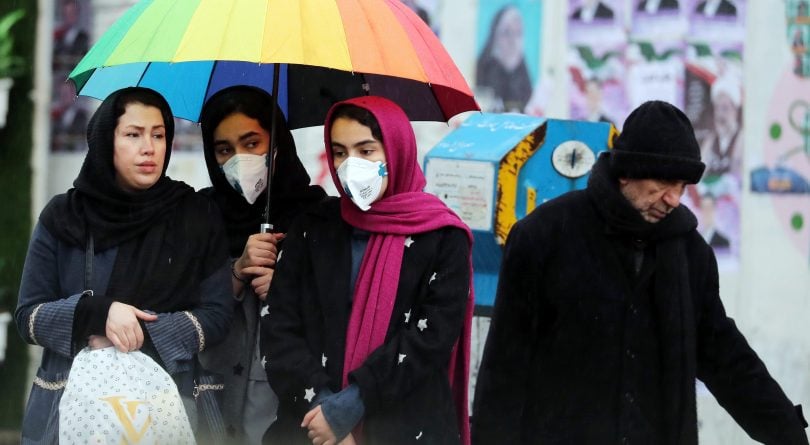 Iranian women wearing masks wait for a taxi in a street of Tehran, Iran, Feb. 20, 2020. According to the Ministry of Health, two people diagnosed with coronavirus died in the city of Qom, central Iran. The disease caused by the virus (SARS-CoV-2) has been officially named COVID-19 by the World Health Organization (WHO). (ABEDIN TAHERKENAREH/EPA/CP)

According to the data on the World Health Organization website, at the time of writing, a total of 2,460 confirmed cases of COVID-19 have been reported from outside China. A particularly large and spectacular increase was clearly due to what is best described as an “incubator,” the cruise ship Diamond Princess, in Yokohama harbour, from which 691 new infections were recorded among passengers and crew members.

South Korea announced 977 cases almost overnight, with transmission apparently associated with a church congregation. Italy, without warning, reported 229 cases where previously there had been none, the first large cluster in Europe. And almost at the same time, the Islamic Republic of Iran, announced 61 cases and 12 deaths, the first cluster in the Gulf States. Speaking in Tehran on Friday, the spokesperson for the Health Ministry, Dr. Kianoush Jahanpour, attributed most of the cases to travel or in the city of Qom, where a Chinese company has been building a solar energy plant. Qom is also a Shiite religious pilgrimage site. But the identification of cases among Iranian travellers to the city indicates that there, too, local transmission is taking place. According to CNBC News, the outbreak of the coronavirus in Iran has been linked to a case in Canada.

In an earlier Maclean’s piece, I had raised doubts about the credibility of the daily count of cases issued by China’s Centre for Disease Control and Prevention. The possibility that large numbers of unreported (mainly mild) cases could not be ignored, which would affect the calculation of the expected case-fatality rate. But until last week, the cases accumulated outside of China offered a useful comparison for calculating a case-fatality rate under conditions where the attending medical staff far outnumbered the odd incoming patient. Under such intense scrutiny, the estimated case-fatality was about 0.4 per cent; that’s four per thousand and only a fifth of the rate from China’s confirmed figures. Sadly, this is now not a reliable cross-check: Iran’s 61 cases and 12 deaths in just a few days, infers an apocalyptic case-fatality rate of 20 per cent! The only reasonable explanation was that a very large number of cases are not being diagnosed or reported. To reach the case fatality rate of all the other countries outside of China (without Iran, around 0.4 per cent), the 12 deaths would have resulted from close to 300 cases. Just how many ill people are not being reported?

MORE: A made-in-Canada solution to the coronavirus outbreak?

To make matters worse, Jahanpour went on to state that “the pathogenicity of the virus does not necessarily exceed the H1N1 influenza.” But as seasonal influenza has a case fatality of between 0.1 to 0.2 per cent, the figures actually reported by Iranian Ministry are clearly at least 100-times more lethal. We can only hope that the arithmetic skills (and data collection and analysis) of the Iranian Ministry are soon revised and made more credible.

The containment of any virus has always been the key to preventing its spread, and until 10 days ago, China had successfully managed to contain 99 per cent of all confirmed cases. Today, three per cent of cases are reported from locations outside of China, 30 countries are reporting cases on their soil, and we have no idea of the extent of transmission in those regions where reporting is hampered by lack of expertise, absence of public health infrastructure, or political expediency. Containment among those countries that are well prepared and well equipped will delay local uncontrolled spread, but at this point, global spread—a pandemic—must be considered as a definite possibility.

Dr. Tedros Adhanom Ghebreyesus, director-general of the World Health Organization (WHO), speaking at a news conference on Feb. 21 at the agency’s headquarters in Geneva, said, “the cases that we see in the rest of the world, although the numbers are small, but not linked to Wuhan or China, it’s very worrisome.”

Curiously, the WHO director general is reluctant to claim that COVID-19 is a “pandemic” despite the WHO official definition of the criteria defining a pandemic:

Phase five is characterized by human-to-human spread of the virus into at least two countries in one WHO region. While most countries will not be affected at this stage, the declaration of phase five is a strong signal that a pandemic is imminent and that the time to finalize the organization, communication, and implementation of the planned mitigation measures is short.

Phase six is the pandemic phase, characterized by community-level outbreaks in at least one other country in a different WHO region in addition to the criteria defined in phase five. Designation of this phase will indicate that a global pandemic is under way.

The announcement that Korea was experiencing sustained spread was surely enough for COVID-19 to qualify for phase five, while the propagation of cases in Italy and Iran easily constituted phase six. Declaring the “P-word” sends an alert to sheltered folks and governments, who feel that they are immune from such events. It has been a decade since the last pandemic was declared—an influenza—barely more threatening than seasonal influenza.  But the virus causing the present disruption is roughly 10 times as dangerous as seasonal influenza, and with similar rates of spread. SARS visited Canada in 2003, and we can venture the following comparison at this stage with COVID-19.

In six months during 2003, SARS infected a total of about 8,000 people and killed about 770 in just a few locations: China, Taiwan, Hong Kong, Toronto and Singapore, with a handful of cases in a few other cities before it was contained and ran out of steam. But in only about two months, COVID-19 has involved 30 countries, with nearly 80,000 ill, and 2,500 deaths. It shows no sign of slowing in its spread and has a very good chance of appearing in all countries and communities, whether they are ready or not.

We simply do not know if it will slow during the summer months, as some respiratory viral infections do. If it does, be ready for at least a second wave in the fall, following the path of the 1918 influenza and the 2009 influenza. There are currently no cures for COVID-19, although results from autopsies of COVID-19 victims suggest that the severe pulmonary inflammation could be relieved to some extent by using corticosteroids and ventilators. Preliminary results from two clinical trials testing potential antiviral treatments for COVID-19 are expected in three weeks, but vaccines could take much longer to develop, test and produce.

Of course, the virus may never run out of control in Canada. If so, the preparation will be useful practice for the next alarm. But for the country to be invaded by a viral pathogen, with no preparation, forethought, or planning having taken place would be unconscionable.