History is repeating itself in global geopolitics. What now? 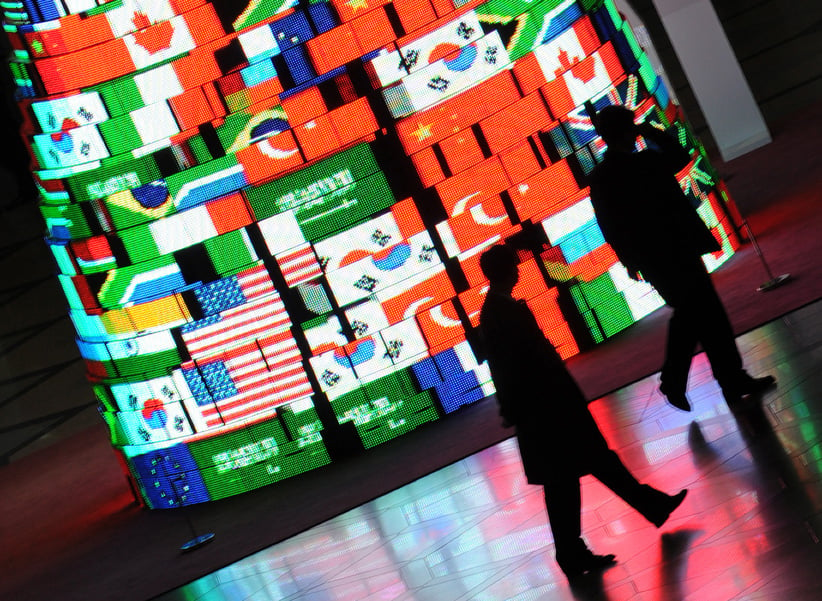 Delegation officials walk past a screen tower displaying the flags of the G20 member countries at the Seoul international convention, and venue of the G20 Summit, on November 12, 2010. (Romeo Gacad/AFP/Getty Images)

In 1992, Francis Fukuyama wrote The End of History and the Last Man, a widely cited and highly regarded examination of global geopolitics at the end of the Cold War. Fukuyama’s thesis was that the demise of the Soviet Union eliminated the existential threat to civilization posed by its nuclear standoff with America. Nation-states would pursue economic prosperity for their citizens in peaceful coexistence following the pattern established by the liberal democracies of the North Atlantic economy.

Failed reforms and corrupt leadership led Russia from central planning to oligarchy; critics accuse President Vladimir Putin of planning to make Russia great again by bringing the former Soviet satellite states back into Moscow’s orbit. In February, the Ukrainian journalist Natalia Antelava cited one resident of a former Soviet republic as saying, “I was born in the Soviet Union. I never thought I would die in one.”

Meanwhile, in liberal democracies, the steady march toward greater prosperity along the globalization pathway promised by the end of history has been rudely blocked by anti-globalization backlash and populist protests.

In the U.K., an unexpected vote to leave the European Union was fuelled by simmering resentment to immigration and a perceived loss of national sovereignty. Elsewhere in Europe, political fissures have opened and threaten to widen. Europe still needed to hold its breath before France elected Emmanuel Macron over the far-right Marine Le Pen as president. And the U.S., once a steady guarantor of international order, has been politically over-ended by a novice president whose erratic pronouncements inject profound uncertainty and deep distrust in capitals around the globe.

History, it seems, is not so much at Fukuyama’s end, as it is repeating itself in the manner Karl Marx envisioned instead: first time tragedy, second time farce. And the upcoming G20 summit, the meeting of the minds created to discuss economic collaboration for mutual strength scheduled for July 7-8 in Hamburg, Germany, offers an opportunity to consider where we go from here.

It is important not to confuse what might be with what is. But for anyone who lived through or has studied the 1930s, there is a troubling similarity between what historian Piers Brendon referred to as the “dark valley” of that earlier period and today. Both episodes feature severe economic shocks that frayed the social fabric, undermining trust in the status quo and existing political institutions; in the 1930s, that environment provided fertile ground for the growth of nationalistic movements as messianic leaders—who vowed to restore past greatness—mobilized the dispossessed. Sadly, they appealed to an instinctual fear of the unknown and the foreign, leading to the death of millions in Nazi concentration camps and on battlefields around the globe.

In the economic domain, the polarization of politics was mirrored by a retreat from open markets and international commerce. Governments, intent on maintaining domestic employment, introduced tariffs and other protectionist measures in an attempt to “export” unemployment to others. But such beggar-thy-neighbour policies invited retaliation and, absent measures to increase domestic demand, merely propagated global stagnation. That stagnation undermined international political cohesiveness and weakened comity among democratic nations which, by acting in concert, might have checked the fascist aggression that led to the Second World War.

Even as global war raged on, a remarkable group of men and women recognized the nexus between political and economic security. The post-war arrangements for global governance they built included institutions for collective security and shared prosperity. This architecture successfully changed perceptions of the global economy from a zero-sum game, in which one individual gains at another’s expense, to a positive-sum game that benefits all players. The international institutions that were created and the recognition of shared interests promoted cooperation and consultation.

The G20 response to the global financial crisis and the economic recession that followed demonstrates the gains from this cooperation and consultation. By acting in concert to ensure central banks provided liquidity to financial markets and governments avoided fiscal austerity, G20 members contained panic and supported economic activity. In doing so, they very likely averted another Great Depression. It was a high point of international economic cooperation, the foundation of which were laid in the post-war era.

Ironically, the U.S. was the head architect of this project and, by necessity, its lead financier. And while there were substantial costs associated with maintaining the system, the enormous benefits outweighed them. For the past 70 years, most Americans have enjoyed an unparalleled standard of living. Not all have shared in this prosperity; inequality has risen to gilded-era levels. But inequality is not the fault of the international governance arrangements. Blame is properly assigned to policy failures at home; not the successes of others in adopting market-based policies.

The multilateral system is undoubtedly messy, frustrating and in need of targeted reform. Yet it is not responsible for the regressive tax cuts pushed by George W. Bush ostensibly predicated on the chimera of what his father once described as “Voodoo economics.” Nor were financial markets deregulated on the directives of international agreements. And while IMF advice at the time was probably unhelpful, multilateral obligations did not require that governments prematurely turn to austerity in 2010, just as major economies were recovering from the trauma of the financial crises. That decision reflected a misguided adherence to the “gold standard mentalité,” which required that fiscal policy be subordinated in order to support a currency’s peg to gold. Following the onset of the Great Depression in 1929, when economies around the globe started to contract, this commitment led governments to raise taxes and cut spending, further weakening their economies. It was a fatal error from which important lessons were learned—or, at least, should have been learned.

Inconceivably, the international order that has been the foundation of global peace and prosperity for the past seven decades is suddenly in doubt. And that doubt threatens to resurrect a zero-sum view of the global economy, in which the powerful use threats and intimidation to get better deals from the weak. That prospect recalls the dark valley of the past and could mark the return of history.

In this respect, the challenges confronting the G20 today are even more daunting than those faced in the autumn of 2008. Back then, the prospect of global economic depression united the group into a cohesive body focused on preserving the global economy as a wellspring of prosperity. Today, even as most economies continue their recovery, the polarization of domestic politics threatens to create fissures in the foundations of international cooperation. If unchecked, this process could lead to the polarization of policy frameworks—an outcome that would not be in any G20 member’s interest.