Angela Wright: Over 100 American universities have contracts with the U.S. Department of Defense. This has allowed universities to procure grenade launchers, armoured vehicles and military assault rifles like the M-16. 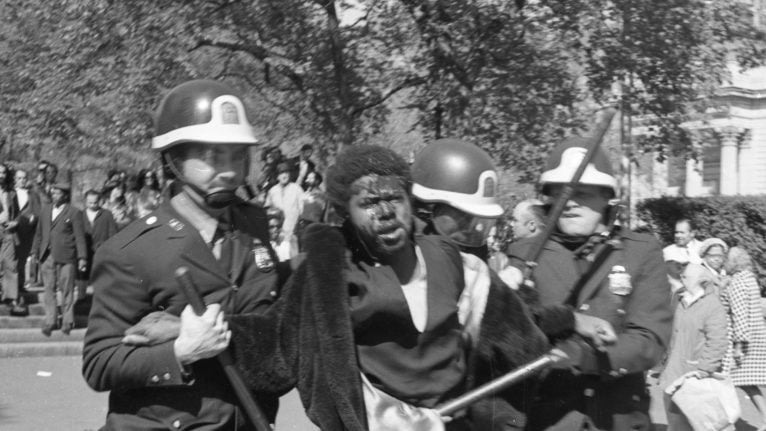 Angela Wright is a writer and political analyst based in Toronto.

It was just after midnight. I was finishing up what had become a nightly routine: a late-night study session with friends at the library. It was a cool fall night, and my friend offered to drive us to our on-campus apartments. Just as we pulled into the parking lot of my friend’s apartment complex on campus, bright headlights flooded the windshield.

A police officer approached the car. “What are you doing here?” he said. As one friend calmly explained he was dropping us off, my other friend told the officer that he had no business pulling us over on campus. Suddenly, I was reminded that I wasn’t in Canada anymore. In the United States, campus police carry guns. I sat in the back seat in sheer silence, staring at my friend’s campus parking pass hanging from the rearview mirror.

With the world’s eyes fixated on the violence of municipal police forces, the central role of armed police forces on American university campuses have flown under the radar. And the history that brought so many armed police officers to campuses across the U.S. is marred with controversy as well as death.

MORE: Hal Johnson: ‘Yes, there is systemic racism in Canada’

The first college police force was formed in 1894 at Yale University, but it wasn’t until the 1960s that armed police officers on campus became a ubiquitous part of American college life. Unlike municipal police forces, who are funded with municipal budgets and paid with local taxes, university police departments are employed directly by universities.

As Baby Boomers entered university, the 1960s anti-segregation protests gave way to a growing anti-war protest against the U.S. military’s increasing involvement in Vietnam. But in 1965, the military made changes to draft eligibility: previously, young men enrolled as undergraduate and graduate students in universities were exempt from the draft. Now, desperate for more soldiers, only the highest-achieving students would be exempt. Using various testing methods, universities ranked their students, and only those whose scores tested above a certain cut off would be exempt from the draft.

University students staged anti-war teach-ins across campuses and protested their universities’ complicity in the war effort. University administrators often called in the police to disperse students protesting on campus. This came to a tragic head on May 4, 1970, when members of the Ohio National Guard opened fire on students protesting at Kent State University, killing four and injuring nine others.

This ugly history still lives on. Such was the case at both my alma maters. At my undergraduate institution, the University at Buffalo, it was rumoured that its North Campus—designed and built in the early 1970s—has no lawn where students can congregate in order to prevent large students gatherings, and to make protest easy to dismantle by police. At the University of Iowa, where I did my master’s degree, the school’s College of Education, which opened in 1972, was built with reinforced interior doors that students believed could be closed to wall staff and administrators off from protestors.

After the campus protests in the 1960s and 1970s, university administrators began lobbying state legislatures to allow them to have their own dedicated police forces. Essentially, university police forces were created not to protect students from harm, but to protect the university from its students.

This legacy lives on until today. Over 90 per cent of public universities have sworn police officers (as opposed to security guards) and over 80 per cent have the power to arrest and patrol outside campus boundaries. Almost all—approximately 95 per cent—sworn campus police officers are allowed to carry a firearm and use chemical weapons like pepper spray. Despite university administrators portraying campus police as less violent and confrontational than municipal police forces, campus police officers have been involved in violent and deadly confrontations—not only with students but with local residents as well.

In 2015, a University of Cincinnati police officer Ray Tensing shot and killed 43-year-old Samuel DuBose after he pulled over DuBose for a missing license plate on a street off-campus. Scout Schultz, a 21-year-old Georgia Tech student was shot and killed by campus police while he was experiencing a mental breakdown. Four years after Portland State University decided to arm its police force, two campus police officers shot and killed U.S. postal worker and Navy veteran Jason Washington as he tried to break up a fight outside a bar in 2018.

Just like municipal police forces, campus police forces have become increasingly militarized. Over 100 American universities have contracts with the Department of Defense. Through a specialized program operated by the Defense Logistics Agency, a combat logistics support agency in the U.S. Department of Defense that assists the military in acquiring weapons, campus police departments receive excess equipment from the military—for free. This has allowed universities to procure grenade launchers, armoured vehicles and military assault rifles like the M-16. According to reporting by the New York Times, over 66 institutions have procured the high-powered semi-automatic rifles, with one university, Arizona State, possessing 70.

As I look back on my experience with campus police that cold night, I realize how common my experience of an unnecessary interaction with campus police is for Black students in university. Despite being fed an image of a more docile police force, police departments on campus are just as armed as their municipal counterparts, and equally willing to use deadly force. I look back and feel lucky that that incident didn’t turn violent—or worse.