How can the U.S. hold a free and fair election?

David Moscrop: The U.S. could lean into postal voting, which is far safer than its in-person variant. But of course President Trump opposes that. 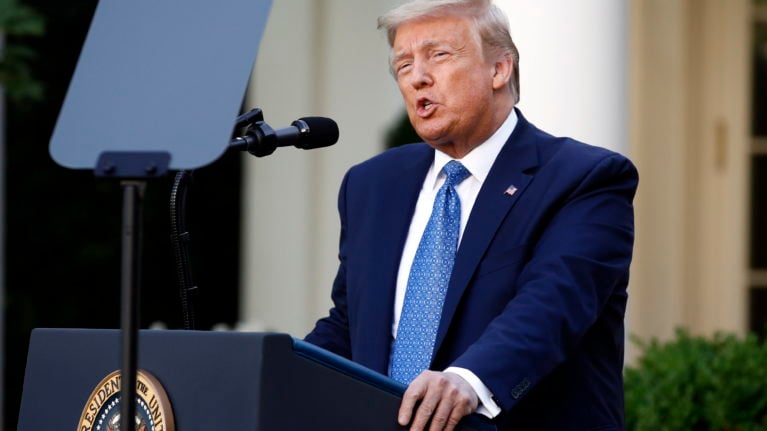 Donald Trump's West Wing advisers and campaign aides have grown increasingly concerned about his reelection chances as they've watched his standing take a pummelling first on his handling of the coronavirus pandemic and now during a nationwide wave of protests against racial injustice. (Patrick Semansky/AP/CP)

David Moscrop is a social sciences and humanities research council postdoctoral fellow in the Department of Communication at the University of Ottawa. He is also the author of  Too Dumb for Democracy? Why We Make Bad Political Decisions and How We Can Make Better Ones.

Police brutality against protesters is raging across the United States as a pandemic continues and the president rails against the people and institutions he’s been elected to serve.

NPR journalist Sam Sanders captured the spirit of the moment and the year it has been so far, tweeting, “Really don’t understand why 2020 is trying to be 1918 and 1968 at the same time.” Washington Post global opinions editor Karen Attiah imagined how reporters would write about the protests and state violence in Minneapolis if they were happening abroad, writing “Now, as the country marks 100,000 deaths from the coronavirus pandemic, the former British colony finds itself in a downward spiral of ethnic violence.”

In 1918, at the time of the Spanish Flu, there were a handful of democracies around the world. Later in the century, the number would grow through evolution, revolution, decolonization, and other means. Now, the world is in a democratic recession. The United States, lacking self-awareness, has long imagined itself as the beacon of the free world. Not only is the country in democratic decline—headed by a fascistic authoritarian, plagued by racism, dominated by capital and money and incapable of delivering representative policies—it is facing one of its most important elections against the backdrop of a once-in-a-century pandemic, and things could get worse.

MORE: Who are the Trump-loving Canadians?

How can the United States hold a free and fair election in the time of COVID-19? South Korea modelled a process back in April, and they managed a turnout of 61.2 per cent during the legislative election. But the United States isn’t South Korea. It lacks political will and, if past is prologue, capacity to introduce a sophisticated series of safe and effective voting processes. Perhaps by November that will change. I doubt it.

The U.S. could lean into postal voting, which is far safer than its in-person variant. Of course, President Trump opposes that. Instead, he claims postal balloting is ripe for widespread electoral fraud that would lead to a “rigged” election. He is wrong about the legitimacy of mail-in ballots (Trump himself used one this year), but that didn’t stop him from attacking states that have taken routine and other steps to facilitate the mail-in option.

Trump’s attacks on postal balloting present at least three immediate problems, and they contribute to a fourth. If postal ballots are undermined and underused, fewer Americans will vote. The first problem, then, is voter suppression. Those who turnout in person because postal balloting isn’t available, or has been maligned by the president and his surrogates, will be put at further risk of contracting COVID-19, which makes voter safety the second problem. The third problem is Trump’s incorrect claims about the legitimacy of postal ballots and the threat of a “rigged” election. These lies pave the way for the president to reject the results of the election if he loses. Then what? We have our fourth problem.

Writing in the Washington Post, Brian Klaas, assistant professor of global politics at University College London, asks “What will happen if Trump loses and then takes to Twitter to say he actually won?” Think about that for a moment. It seems perfectly plausible he would. In fact, it seems likely, and dangerous.

Klaas continues: “It’s not hard to see how deadly that could become, particularly given that Fox News personalities are already absurdly throwing around the word ‘coup’ to describe lawful investigations and oversight of the president’s conduct. When people in positions of authority and influence invoke the language of political violence and then lose power, violence often ensues. It would be a mistake to assume the United States is somehow immune from that possibility.” Thinking back to armed protestors in the Michigan statehouse about a month ago, it would indeed be a mistake.

Widespread violence by authorities, armed right-wing protestors, diminished state capacity, unresponsive government, and the prospect of a president that rejects the outcome of an election summon the spectre of a failed state. George Packer, staff writer for The Atlantic, reflecting on his country’s response to the pandemic wrote, “Every morning in the endless month of March, Americans woke up to find themselves citizens of a failed state.” He clarified his argument later with an interview in Vox, saying “No, America doesn’t meet the textbook definition of a failed state…I was speaking figuratively, or writing figuratively, when I said that we’re living in a failed state.” He’s still right. So is Donald Earl Collins, who argues the country as-is, amounts to a “failed experiment.”

The United States isn’t a textbook failed state. But it is a deeply flawed, decaying state built by way of Indigenous genocide and slavery, the effects of which are not merely history, but present, too. Whether the country can be salvaged and remade is an open question. But what is certain is that the work of saving the country, if it is to happen, must be extensive—a tear-down job—and directed by those who have been marginalized and oppressed. Perhaps through that work something better can emerge. And last.