How can we do sports in isolation?

David Hollander: Nerf basketball happens to be the best version of basketball that fuels the imagination to jettison us beyond our confines. When I need to mentally elevate—literally think outside the box—I turn to Nerf. 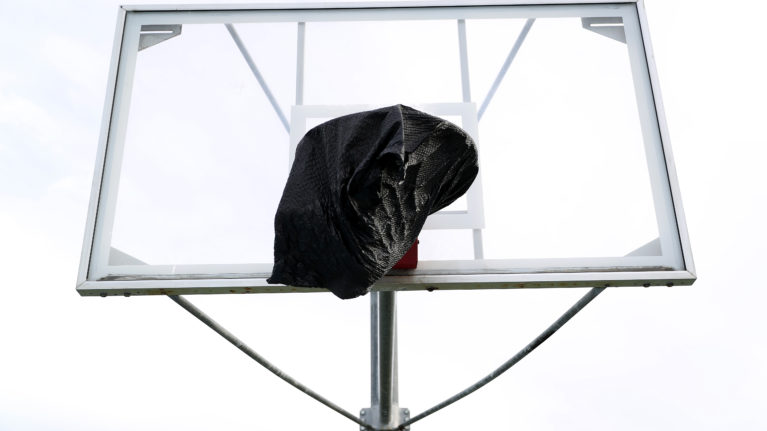 The basketball hoops in California are covered up with a tarp to prevent people from gathering and playing basketball on Mar. 31, 2020 out of the concern of COVID-19. (Maxx Wolfson/Getty)

David Hollander teaches an NYU elective called “How Basketball Can Save the World.” He is the assistant dean of Real World in the School of Professional Studies at NYU and the clinical associate professor at NYU’s Tisch Institute of Global Sport.

When the Steve McQueen character in the World War II POW classic The Great Escape gets sent to the cooler, a windowless isolation box, he shrugs insouciantly. His mates toss him a baseball and glove as the guards escort him away. McQueen’s character endures the isolation by rhythmically caroming the ball against the sides of the tiny cell walls, the object of his game seemingly to deliver a true hop into his glove every time. When the guards come to remove him, he’s self-satisfied, self-amused, and appearing little worse for wear. The real torture would have been to take away his ball and glove.

How can we do sports in isolation?  Since Mar. 11, when the NBA led the nation in taking social distancing seriously, we’ve been reading a lot about how “sports” is dead.  No games. No March Madness. No opening day. Olympics postponed. Sports writers—what do they write about? ESPN’s eight (or however many) media platforms—what can they show? On a grassroots level, we’re experiencing untold collateral public health damage: youth and recreational sports are gone.

As long as there is Nerf basketball, there can be sports in the time of COVID-19.

Reyn Guyer, who had just finished giving the world Twister, (the guy knew something about indoor games), invented Nerf. Like many great inventions, Nerf occurred by accident. Guyer and his team had been messing about with a foam substance and, as you might expect when you put a bunch of rambunctious scientists in one room together for prolonged periods of time, they began pelting each other with the stuff, for fun.

Renker recalls that eureka moment: “We all realized that something very exciting had just happened. Here were five, supposedly grown-up guys, hurling chunks of lightweight foam at each other, and no one was hurt. We had inadvertently created the world’s first indoor ball and broken the parental rule ‘no throwing balls in the house’.”

The promotional copy on the original Nerf ball box read, “SAFE! The Nerf Ball is made of incredibly soft and spongy synthetic foam. Throw it around indoors; you can’t damage lamps or break windows. You can’t hurt babies or old people.”

In its first year on the market, more than four million Nerf balls were sold. In 1972, Parker Brothers introduced “Nerfoop,” the Nerf ball plus a miniature wire indoor basketball hoop that perfectly clasped onto a standard-width closet door. To nine-year-old me, that was genius.

My brother and I were early adopters. Sure, nothing beat playing outside. But when mom said time to come in, it was time to come in. And when forced inside, that Nerfhoop, fastened on Andy’s bedroom closet door, became the tiny space to launch our hoop dreams.

We did the superhuman things that only Dr. J could do. We imitated the grace and majesty of Walt “Clyde” Frazier. On that hoop, Clyde and J could play one-on-one.  Nobody’s ever seen that before, but we saw it.

I’ve never stopped playing Nerf. In my law school apartment, late into the night, I shot Nerf while memorizing elements of the Statute of Frauds. Today, you’ll find three Nerfoops on the walls of my office. When I need to mentally elevate—literally think outside the box—I turn to Nerf.

There are stories upon stories of basketball hall of famers who embraced the concept of Nerfoop, creating a makeshift, safe, micro-indoor basketball, as a playground of escape and imagination long before the Nerf retail invention.

Spencer Haywood, the iconoclastic all-star who eventually scored victory in the U.S. Supreme Court, played barefoot adjacent to their shanty in Mississippi, when his mom filled a croker sack full of raw cotton and rags, attaching a barrel rim to a telephone pole. Larry Brown, the only coach to win NBA and NCAA championships, bent a hanger into a rim, shredded a sock for a net, and rolled sweat socks into balls inside his East Brooklyn apartment. Pat Summit, peerless women’s legend, nailed up an iron rim in the family hayloft, and played all night. Jerry West, Mike Krzyzewski, and so many others, all talk about how basketball relieved isolation and freed their minds from their immediate, physical environment. “I could imagine, conjure, create,” Steve Nash said in an interview from the book Basketball: A Love Story. The two-time NBA MVP, used the game to escape social awkwardness, a lonely tween-ager in British Columbia having moved there from South Africa.

What I’m doing to keep my shot right while I’m at the Crib….🤣😷 #InHouseChallenge pic.twitter.com/h7N7J74S6D

Current NBA enfant terrible Trae Young recently posted an #InHouseChallenge on Twitter, a three-point simulation drill he created in his hallway with socks and laundry baskets. His self-isolation suggestion got 2,000,000 views.

James Naismith invented basketball with distinct principles of low barrier to access and antidote to loneliness and isolation in mind. He meant for the game to be a sanctuary for those who felt cut-off, on the outside, marginalized and overpowered. Basketball was meant to be an escape from isolation—societal or physical. That’s why the game has always appealed to marginalized groups like immigrants, the racially discriminated, the misfits, the lonely, the traumatized.

Consider Naismith himself, at the time of his invention. He was an outsider, who’d just landed in Springfield, Massachusetts from Canada, traumatized from the loss of both his parents at an early age; an intellectual wanderer, who after finishing divinity school turned away from the ministry and turned to his higher calling—basketball.

While Dutch sociologist Johan Huizinga in his 1938 seminal work, Homo Ludens: A Study of the Play-Element in Culture explains that play has always been a safe, sublime and necessary space for us to find relief from the difficulty of the human condition, basketball is one of the only forms of athletic play (“sport”) which allows us that find that freedom by playing alone. Nerf basketball happens to be the perfect shelter in place version of basketball that fuels the imagination to jettison us beyond our confines.

That’s another thing Naismith intended for us with his game: transcendence.

Basketball in a very special and compelling way, is about air. It’s about weightlessness and defying gravity. When the game is played in the air, we get excited. Because we see what we may be capable of as a human race. How high can we fly? How long can we stay weightless? They don’t call them Air Jordans for nothing. Because when kids and adults put on those shoes, they want to fly—they want to be like Mike.

We know we can’t fly. We know gravity is part of our earthly condition. “Ah, but a man’s reach should exceed his grasp, or what’s a heaven for?,” wrote poet Robert Browning. Every great society must believe there is something greater to be and to do than only what’s in front of its face. We must fly. Or, we must dare to dream to fly. That dream is a basketball dream.

Basketball laureate John Edgar Wideman writes it beautifully: “When it’s played the way it’s supposed to be played basketball happens in the air, the pure air; flying, floating, elevated above the floor, levitating the way oppressed peoples of this earth imagine themselves in their dreams.”

And oh, this current oppression. This disease, which comes for all of yet sends us away from each other; shut-in, walled-off. In my city, New York City, it appears we may be like this for a while.

You miss sports? You miss that inimitable human great escape? You miss freedom? Nerfoop is the deliverance of sports in quarantine. It is Steve McQueen in the box.

Include it in a stimulus bill; we might not be able to get a coronavirus test to everyone, but we can get a chicken in every pot and a Nerfhoop on every door. In doing so, in one small but meaningful way, we can find a space in confinement to transcend this, inside, to be free.