How Canada could prepare for potential new wave of asylum seekers

Opinion: Months after Justin Trudeau’s message that immigration must be welcoming but lawful, there is little evidence of change on the ground 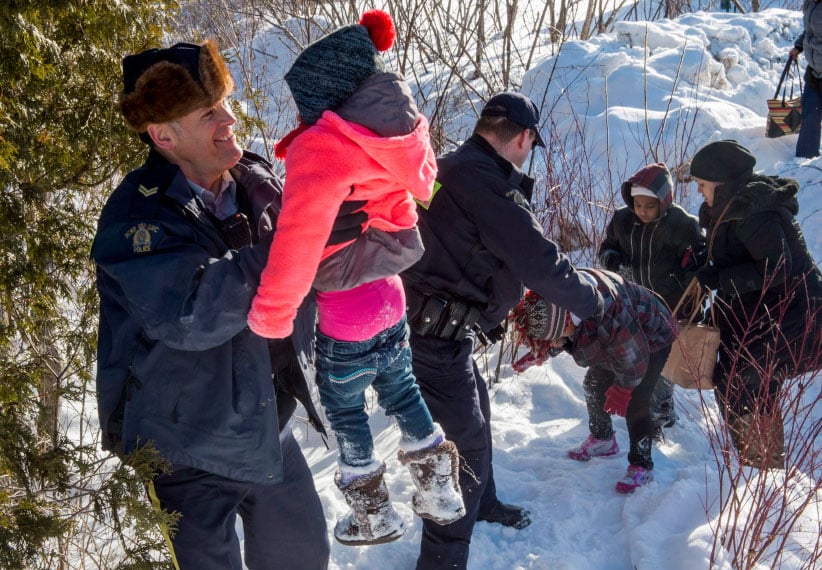 Canada’s reputation as a refugee-protecting country was further burnished last Wednesday, when Immigration Minister Ahmed Hussen announced a multi-year plan that will see over 137,000 refugees and other persons deemed in need of protection settling in Canada by 2020. And, after a fraught few months, Canada is enjoying something of a respite from the illegal border crossings we saw over the summer. According to the Canada Border Services Agency (CBSA), by the end of the summer, they were processing “only” 50 to 100 claims a day, down from 1,200 a day earlier that same season.

Whether this is a trend or a pause, only hindsight will tell. But neither the generosity of Hussen’s plan nor the current respite should make us complacent about the problem of what to do about unplanned arrivals at the Canada-U.S. border. In fact, recent media reports in Canada and the U.S. predict that the issue could flare up again in the coming months.

Currently, there are 250,000 Salvadorans, Hondurans, and Nicaraguans living in the United States without valid visas who face reviews of their Temporary Protected Status (TPS) in the coming months—four times the number of Haitians who received notice earlier this year that their TPS would be lifted, prompting the mass migration north to Canada this past summer. On Nov. 6, the U.S. Department of Homeland Security decided that the Nicaraguans can be removed safely, while postponing for now a decision with respect to the Hondurans and saying nothing about the Salvadorans. Then there are the 800,000 beneficiaries of the Deferred Action on Childhood Arrivals, whose status remains in limbo.

READ: What one day on the Canada-U.S. border says about refugees, tolerance and Trump’s America

To his credit, after first appearing to invite asylum seekers to try their luck in Canada, Prime Minister Justin Trudeau now seems to accept the problem it would pose to Canada if populations living illegally in the U.S. were to come north, rather than returning south to their home countries. Walking back his earlier message in a late-summer press conference in Montreal, he said: “Canada is an opening and welcoming society. But let me be clear: we are also a country of laws. There are rigorous immigration and customs rules that will be followed. Make no mistake.”

That’s the right message, even if it was belatedly delivered. But to be credible, it must be backed by action. Otherwise, migrant networks—including for-profit operations—will quickly notice that, despite tough talk, Canada is still an easy mark for opportunistic economic migrants. And so far, three months after Trudeau’s change of tone, there is little evidence of change on the ground.

The problem is the gap in enforcement created by the 2001 Safe Third Country Agreement. This agreement allows Canada to turn back an asylum-seeker coming from the United States who failed to make his claim first in that country, but only if he arrives at an officially designated port of entry. This gives asylum-seekers a strong incentive to simply avoid official ports of entry, crossing the border illegally along back roads and across farmers’ fields.

The government should use the RCMP more effectively to close gaps in our porous border. Just as the U.S. has Immigration and Customs Enforcement (ICE) to police its borders, in Canada, the RCMP has the mandate to patrol between ports of entry run by CBSA. Mounties serving in this capacity are tasked with ensuring Canada’s immigration laws are observed and the border is secure. You’d hardly know this, though, from the widely shared images of the RCMP politely assisting asylum-seekers with their luggage. That bellhop service isn’t required by the law, but it has become a government policy—one that should change.

Since the spike in illegal crossings this summer, several ideas have been advanced about how to protect the border. But before we reinvent the wheel, engage new resources, or chart new legal territory, there is something the government could do right now—with no new resources or laws—to defend our border: Public Safety Minister Ralph Goodale has the authority under Section 5 of the RCMP Act to direct the Mounties to respectfully but firmly stop migrants from illegally entering Canada.

READ: The migrant surge on the border isn’t a crisis, it’s just a fiasco

At the border itself, the RCMP could direct migrants to the nearest Canadian port of entry via a route on the U.S. side of the border. If necessary, the RCMP, authorized as members of a joint Canada-U.S. Integrated Border Enforcement Team, could even escort them there personally. Once at a port of entry, the Safe Third Country Agreement would apply and most migrants would be returned to the U.S. to make asylum claims there.

This would be consistent with the Immigration and Refugee Protection Act of 2001, in which Parliament directed that RCMP officers cannot accept a claim for refugee protection (only a CBSA officer or a designated employee of Immigration, Refugees & Citizenship Canada can do that). That decision frees the RCMP to meaningfully protect the border between ports of entry, reestablishing control over the boundary between our two countries. In extreme cases, that could mean brief detention of the rare aggressive asylum seeker for transport to the nearest Canadian port of entry—but as incentives to run the border build, this would allow the RCMP to reestablish control over the boundary, meaning physically obstructing people will become unnecessary, and ensure that our border means something.

Canadians are generous and welcoming people, but our support for high and now increasing levels of immigration, including refugees, goes hand-in-hand with a belief that the immigration process is orderly and lawful. When Canadians feel their generosity is being abused, goodwill evaporates, as we saw in the backlash against the arrivals of the Ocean Lady and Sun Sea migrant vessels in 2009 and 2010.

If we are to maintain a political consensus in favour of current levels of legal immigration, the Prime Minister must show that his commitment to enforcing the law against illegal migration is more than a rhetorical feint. The government needs to send a clear message that we will enforce our laws and defend the sanctity of our border. And it needs to do so now, in this respite—before winter conditions again increase the danger to northbound migrants.