How has Quebec City changed, one year after a deadly mosque shooting?

Opinion: A city continues to mourn the death of six people at a Sainte-Foy mosque—and grapple with the issues that helped fuel the attack 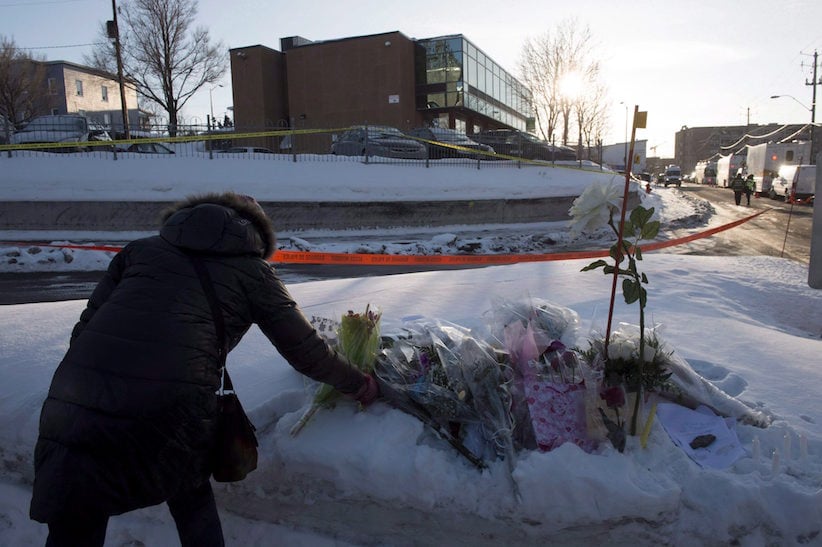 Nora Loreto is a writer and activist who lives in Quebec City.

January is a difficult month in Quebec City. The bitter winter is at full force, and it will linger well into April. But as the month nears its end, the city’s Winter Carnival takes over some of the streets. Bonhomme smiles upon us from shop windows and houses. He reminds us that it’s going to be okay; we can have fun amid such isolating cold.

One week before the January 29 anniversary of the attack on Sainte-Foy’s mosque, CBC News’ Catou MacKinnon presses the mayor to comment on the fact that she has struggled to get individuals to show their face, give their name or talk publicly about how things have changed—for better and for worse—since the attack that left six men dead and five men seriously injured. Régis Labeaume refuses and asks for the next question.

READ: As we remember the mosque massacre, let’s find the hero within us

From the beginning, the reaction of Mayor Labeaume to the mosque shooting has seemed like a proxy for how many white, francophone Québécois feel about this attack: shock, anger, and sadness amid a struggle to grapple with what happened and what to do next.

“We will not be able to, and we can never forget what happened on Jan. 29, 2017,” says Labeaume. We must remember this the way we remember École Polytechnique, he says in French. “We must ensure that our children know what happened.”

It’s nearly impossible to know what to do next when you’re in mourning. Kenza Elazzouzi, who will be one of the hosts of the one-year anniversary vigil on Monday, was devastated by the attack. She lives near the mosque and speaks Arabic. She arrived at the mosque at the same time the police did. They pointed a gun at her and told her to stay away. She held her friend’s son in her arms that night; his father was among the victims. She struggled to continue working after the shooting.

Well before Jan. 29, 2017, Muslims and racialized people in Quebec City have been under a steady and sustained attack. Individual instances and reported hate crimes are on the rise, like when a Toronto tourist who wore a turban was attacked during Easter weekend in 2016. The judge found that the attack was racially motivated.

The tense atmosphere has been fuelled in part by the city’s demographics. “What sense does it make that people are protesting the veil, and yet they’ve never met someone who wears one?” asked Elazzouzi. According to the 2011 Census, Canada’s whitest cities are in Quebec. Saguenay (0.9 per cent), Levis (1.4 per cent) and Trois-Rivieres (2.5 per cent) are the least diverse among cities with more than 100,000 residents. Quebec City’s non-white population is four per cent. By comparison, Montreal’s visible-minority population sits at 31.7 per cent.

According to the 2016 Census, of the 531,000 residents who live here, just over 3,000 people said that they do not speak French; just over half this figure is comprised of individuals who speak neither English nor French. Thirty-seven-thousand people are immigrants, while 87 per cent of Quebec City’s residents have been in Canada for three generations or more. 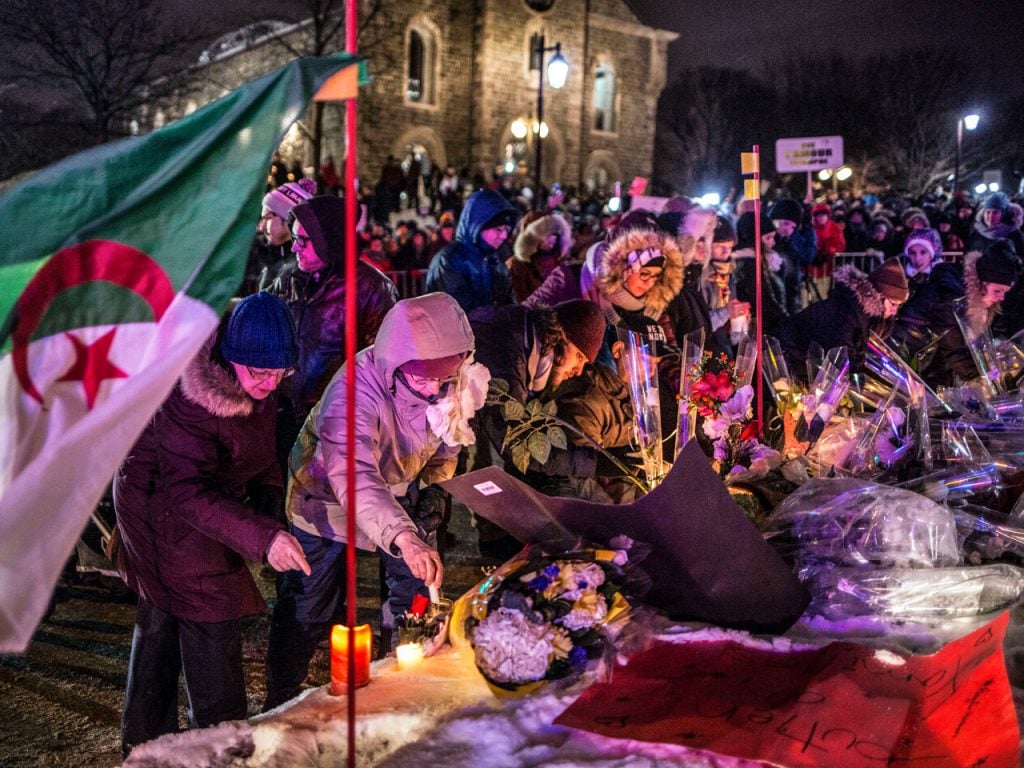 Mourners place candles and flowers at a memorial for the victims, following the shooting. Photo by Roger Lemoyne.

No city is immune from racism, regardless of how diverse it is. But the lack of contact, inter-cultural experience or cultural mixing leads to deep and pervasive ignorance. This makes people susceptible to manipulation by racist groups, says Elazzouzi. She is Moroccan; she grew up in France, immigrated to Canada when she was 12, and has been here for 35 years. She says that she felt a clear difference in how she was treated after the Sept. 11 attacks in New York City. Before, the racist micro-aggressions came mostly from ignorance and curiosity, she says. But after that, Muslims, Arabs, and people perceived to be either, were mixed into the same caricature and became an identifiable enemy. Just this past year, while shopping at a market in Sainte-Foy with friends who are racialized—some of whom were wearing hijabs—a vendor refused to sell to her because, as she said, “Vous êtes importé”—”You are imported.”

In Quebec City, there is a racist ecosystem fuelled by a spectrum of hate. On one side, there are nods to xenophobia that politicians deploy to maintain popularity. At the start of the 2017-2018 legislative session, for instance, the Liberals bowed to pressure and shied away from a review into systemic racism that they had announced, while simultaneously pushing through Bill 62, which forbids women who wear the niqab from accessing public services. This, despite research that suggests that there are fewer than 100 women who wear niqabs in the province.

Then, there is Quebec City’s notoriously inflammatory talk radio world, which whips up anti-Muslim sentiment, as well as the rise of organizations that are explicitly anti-Muslim and white supremacist. Groups that operated mostly online, like Pegida Quebec or La Meute, have started coming out of their dens. Far-right organizations demonstrated against Islam in front of the National Assembly in October 2016. Earlier that year, I ran into a dozen or so Soldiers of Odin, an anti-immigrant street patrol group, at a spring street festival along rue Saint-Jean, in the progressive neighbourhood of Saint-Jean Baptiste.

There have been racist stickers, broken windows at mosques, and the now-infamous pig’s head that was left at the doorstep of the Sainte-Foy mosque months before the tragedy. The week before the shooting, neo-Nazi club Atalante had put posters up at the city’s college and university campuses recruiting young white men to defend their race and join their group.

The far right is an extreme expression of xenophobia, the roots of which go back to the foundation of Canada; white immigrants were enticed from Europe, after all, to populate a new country that was being built, literally, on top of Indigenous nations who have been here since time immemorial. Xenophobia is constantly re-inventing itself, so to imagine that a horrible tragedy would snap enough people of good conscience into action on its own would be unreasonable. And creating spaces to take action has often felt like futile work. Indeed, from the intense media coverage of increasingly frequent acts, you could argue that Quebec City’s far right has had a very successful year.

But it has also been a good year for organizing against this rising tide of hate. New communities have been created, new relationships and friendships have grown, and dozens of events have been held to break down the barriers that exist in Quebec City. Mayor Labeaume’s diagnosis is that we must create places for people to meet others and learn from one another. Perhaps that’s obvious, but it’s been the theme that has underpinned all of the work that has happened this past year.

Before the attack, I saw skinheads prominently displaying their identity on the bus on in the streets with greater frequency. There was a KKK sticker left on a pole outside of my kids’ daycare. Swastikas appeared on different stairways that connected the upper and lower towns. Every time, it felt impossible to bring people together to talk about how to respond.

Jan. 29 changed that. A coalition, anchored by the Ligue des droits et libertés, formed from dozens of groups who were grappling with racism in many different ways. Importantly, individuals with no group affiliation were also encouraged to participate. Through this coalition, we’ve been able to react more quickly when something happens. When Heather Heyer was killed in Charlottesville, Va., at an anti-racism protest, we were able to co-organize a small vigil in one day, outside of the American consulate. There were three families of American tourists who attended, thanks to the suggestion of one of the drivers of the horse-bound carriages who had given them a tour of the city earlier that day.

There is also Le festival contre le racisme, a music festival which took on even more importance last February, as the attack happened just before their first annual event. The festival organizers have since coordinated a soccer tournament this pas summer, where more than 100 people played in a tournament under the banner of fighting racism. This year, the nascent festival will last over three days in March.

There have been celebrations to bring Muslims and other faith groups together, or to simply create discussion spaces about Islam to dispel myths. There have been many protests, counter-protests, forums, and coordinated solidarity gestures, like the Lettres à toi project, where people were invited to write a message to the loved ones of the victims of the attack.

At the heart of our work is one philosophy: if not us, then who? Too often, the problems seem too large, or the projects, too complex—or even too dangerous. The organizing committee for the Jan. 29 vigil, of which I’m a member, has been asked if the event will be safe to attend, or to bring children. Of course, terrifying acts are meant to create fear.

Mourning is difficult, but it will be also be difficult to move from commemoration and mourning into action for systemic change. And orienting change in a city that has so far to go is no small task. On Monday, as we gather near the location of the attack on what will certainly be a frosty night, the words of Gilles Vigneault’s classic song “Mon Pays”—”my country”—will hopefully move many people present into action. It will be sung by a choral collective called Chantons ensemble, and the words will resonate with everyone who understands them in their original French:

From my lonely country, I cry out instead of staying quiet, to all men of the earth: my house is your house. Inside my four ice walls, I take my time and my place to prepare a fire, for people everywhere; humanity is my race.