How Israel became a defender of the Syrian people

Terry Glavin: With the U.S. wavering and the chemical attacks continuing, Israelis have found themselves drawn reluctantly into the chaos 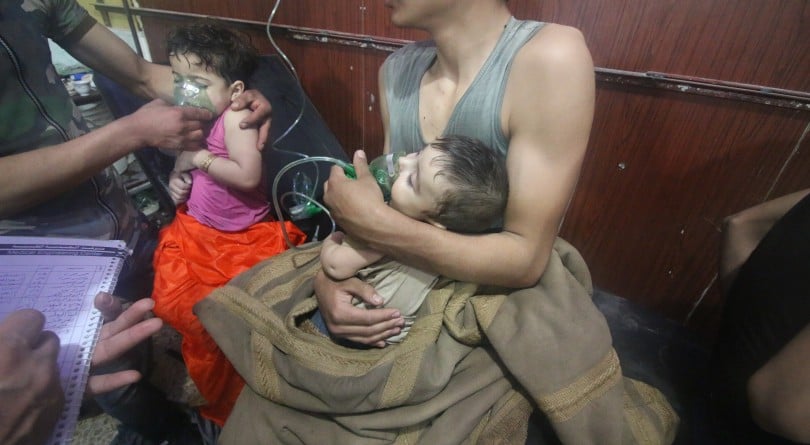 While U.S. President Donald Trump still has everybody wondering what he means by his tough-talk promise of “some major decisions” in response to Syrian dictator Bashar al-Assad’s most recent gassing of Syrian civilians over the weekend, Israel has already acted alone. That much was perfectly foreseeable.

On Sunday, two Israeli F15 fighter jets bombed a known Iranian command centre at the Syrian air base at Tiyas, known as T4, about 50 kilometres east of Homs.

It wasn’t just because of the moral outrage that welled up owing to the streams of video showing dozens of civilians suffocating to death on Saturday from poison gas dropped in bombs from Bashar Assad’s helicopters on the rebel redoubt of Douma, about 10 kilometres from downtown Damascus. Israel has good reason to worry about what might come next.

Douma was the last strategically important stronghold of the anti-Assad resistance south of the Kurdish-led Syrian Democratic Forces zone along the Turkish border. Besieged since 2012, Douma had been collapsing under the weight of a weeks-long final assault by Assad’s forces, aided by the Russian military, Hezbollah and Iran’s Qods Force. Predictably, on Sunday the last rebel group in the area, Jaish al-Islam, agreed to a Russian-brokered surrender and evacuation.

Israelis are concerned that with Douma out of the way, Assad and his Iranian accomplices will now turn their attentions to the southwest, particularly the rebel-held areas on the Syrian side of the Israeli border on the Golan Heights.

Tehran has been chafing to open up a new front on Israel’s borders that would complete an arc from the Mediterranean Sea, where its proxy army Hezbollah has established hundreds of bunkers with missiles aimed at Israel from Southern Lebanon. Hezbollah has already established a Golan regional command center, with hundreds of fighters awaiting orders.

Only last week, Assad reportedly ordered tanks and heavy artillery into the demilitarized buffer zone adjacent to the Golan Heights, in violation of the 1974 disengagement agreement nominally supervised by the United Nations since the cessation of hostilities following the 1974 Yom Kippur War.

Also last week, tensions were heightened in Israel owing to Trump’s declaration that U.S Forces would be pulled from Syria “very soon.” Roughly 2,000 U.S. soldiers remain in Syria, in alliance with the Kurdish-led Syrian Democratic Forces, the key local force involved in the rout of the Islamic State from most of its territory last year. In a second statement last week, Trump said: “I want to get out. I want to bring our troops back home.”

The White House later walked back Trump’s remarks, but Israelis are becoming increasingly nervous about Trump’s true intentions. President Barack Obama had consistently rebuffed Israeli Prime Minister Benjamin Netanyahu’s appeals to ramp up support for Syria’s secular revolutionaries, and Trump is even less committed than Obama was. In January, Trump cut off funds to thousands of anti-Assad fighters affiliated with the Free Syrian Army’s Southern Front, a key grouping of pro-democracy rebels that had forged friendly relations with Israel.

As Syria has plunged ever deeper into catastrophe—more than half a million Syrians have been killed over the past seven years and half the country’s population of 22 million has been displaced—Israelis have found themselves drawn reluctantly into the chaos. Sunday’s airstrike didn’t come out of the blue. It was the second time the Israeli Air Force had targeted the T4 base. Two months ago, a control building was hit by Israeli jets after a drone was directed into Israeli airspace.

After Assad murdered at least 1,000 Syrians in a sarin gas attack on civilians in Eastern Ghouta in 2013, Barack Obama accepted Russia’s offer to enforce his “red line” against chemical weapons in Syria. Russia was to guarantee Bashar Assad’s pledge to refrain from using chemical weapons and to give up his stockpiles. Assad has broken his promises perhaps dozens of times since 2013, by deploying sarin gas, mustard gas, chlorine and napalm on Syrian civilians. And each time, Russia denies that Assad has resorted to chemical warfare.

After Russia entered the picture five years ago, the Israeli government has negotiated “deconfliction” arrangements with the Kremlin, to avoid Russian casualties during Israeli airstrikes. But Moscow has rebuffed Israeli appeals to keep Iran’s proxy fighters at least 60 kilometres from the Israeli border.

Russia says it will endeavour to to keep Iran’s foreign fighters at least seven kilometres from the Golan Heights, but only on a temporary basis. Writing in the Israel Journal of Foreign Affairs Nir Boms, a research fellow with Tel Aviv University’s Moshe Dayan Center, points out: “Throughout these failed negotiations, Israeli decision-makers came to the realization that they would have to protect Israeli interests on their own.”

The Israeli Air Force has so far carried out more than 100 hit and run operations in Syria, mostly targeting regime arms shipments and Hezbollah targets. Partly out of humanitarian concern and partly for security reasons, the Israeli Defence Forces (IDF) have developed strong links with anti-Assad fighters and civilian aid organizations on the Syrian side of the Golan Heights.

It began when the IDF was assigned the job of sorting out how to cope with a flood of injured and sick Syrians who started showing up at the security fence on the Golan Heights in February 2013. Since then, thousands of Syrians have been treated in Israeli hospitals, and the IDF project has evolved into the “Good Neighbours Adminstration,” which has overseen the transport of school supplies and medical equipment into Syria. Israeli doctors and nurses have entered Syria under the protection of Syrian rebel groups. The project has also transported hundreds of tonnes of food and clothing to Syrian villages. It has also provided weapons and ammunition to Syrian rebel groups.

“What’s happening in Syria is genocide of women and children in its cruelest form, using weapons of mass destruction,” Israel’s Sephardic Chief Rabbi Yitzhak Yosef said on Sunday. “We have a moral obligation not to keep quiet and to try and stop this massacre.”

Public Security Minister and Likud hardliner Gilad Erdan said the United States and its allies should be bolstering an international presence in Syria, not walking away, “because without them the genocide we are seeing will only intensify.”

Writing in the Jerusalem Post, Opposition leader Isaac Herzog of the Labour Party noted that it was only a year ago that Trump authorized a cruise missile attack on Syria’s Shayrat air base after at least 74 people were killed in a sarin gas attack on the town of Khan Shaykhun. And yet Assad carries on with his massacres. “We must not stand silent while international humanitarian laws formulated in response to the Holocaust are flouted.”