Andray Domise: Behind the sardonic hashtag is a deeply-rooted disease: for centuries white communities have been conditioned towards our violent expulsion 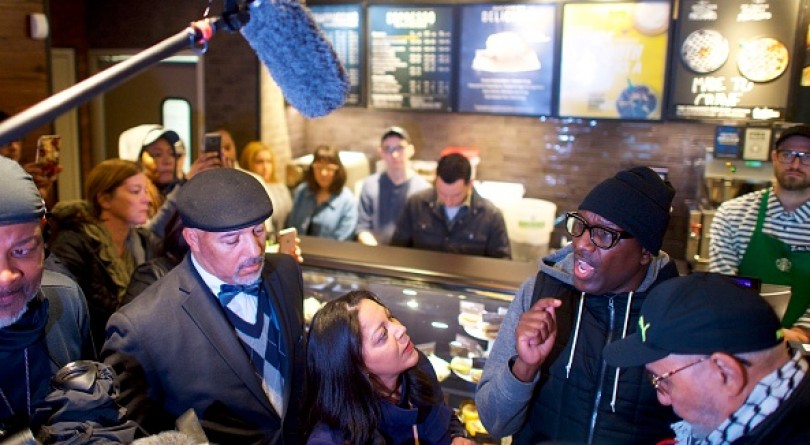 People protest at a Starbucks on April 15, 2018, in Philadelphia, Pennsylvania, after the police arrested two black men who had been waiting inside the shop.(Photo by Mark Makela/Getty Images)

In May of 1865, U.S. Civil War correspondent (and future vice-presidential nominee) Whitelaw Reid toured the postwar South, along with Chief Justice Salmon P. Chase and several officials from the Andrew Johnson administration. The purpose of the tour was “to learn as much as possible, from actual observation, of the true condition of the country,” that country being the reincorporated South. What they found were communities riven between hope and bitter hatreds.

As emancipated Black people cautiously made their way towards social and civic enfranchisement, whites of the former Confederacy remained undeterred in their ethos that was best summed up by Supreme Court justice Roger B. Taney eight years earlier: that insofar as their rights were concerned, Black people had none which the white man was bound to respect.

Reid interviewed dozens of subjects for his book After the War, and what he found was a white society that harbored an abiding hatred for Black agency and class mobility. “The negro feels himself aggrieved by the petty spites of the men who can no longer hold him enslaved,” Reid wrote, “The master feels himself outraged that one over whom his power had been so absolute should ‘go putting on airs this way’ in his very face.”

While the South had a name and codification for its racialized caste system, echoes of Jim Crow rang across the western world where the hierarchy hadn’t been explicitly named. It took the form of redlining and restrictive housing covenants in the north, sundown towns in the midwest, and Black exclusion zones in the pacific Northwest. It was the razing of Africville, the incorporated Ku Klux Klan chapters in Saskatoon and Edmonton (the latter of which existed as recently as 2003), and the Laurier government’s expulsion of Black “exodusters” from the Prairies.

All of this is to say that, for the vast majority of the time that modern society has existed, white discomfort with the Black body has been legitimized and enforced through violence either overseen or tacitly approved by the state. The agents of that violence have changed hands repeatedly over time, from overseers and slave catchers, to lynch mobs and terrorist militias, and finally to police forces.

In the wake of several incidents over the last several weeks that saw white employees, neighbours and complete strangers call the police on “suspicious” and noncompliant Black people, I’ve been asked dozens of times whether the problem is getting worse, or if it’s simply that the problem is receiving more attention from the news. The answer is “yes” to both. And we have smartphones.

But there’s a problem that’s not being spoken about often enough in news media. While we’ve picked up on hashtags to sardonically document the mundane activities in which Black people cannot participate without police intervention (#WaitingWhileBlack, #ShoppingWhileBlack, #SleepingWhileBlack, etc.), the news has mostly failed to interrogate why this is happening, and what systems are enabling it to continue. The uncomfortable answer is that white communities have, for centuries, been socially conditioned towards our violent expulsion. And they have accomplices in high places.

A while back during the Gerald Stanley trial, I wrote that discriminatory acquittals by all-white juries can give self-appointed vigilantes the impression that the law is engaged in a secret handshake with them. But the court of law is far from the only system that makes this offer. The police, one would hope, should have the latitude and common sense skills to understand that a man moving boxes of his worldly possessions into an apartment (an apartment to which he has the keys), is not likely to be a burglar. One would expect they have the presence of mind to know that a Yale student who has peacefully unlocked and entered her dorm quite likely belongs on campus, and that a business model exists whereby homeowners can offer temporary lodging to total strangers that arrive and leave with suitcases.

But the power of police to harass, question and commit violence against people they deem “suspicious” is a near-indelible symptom of the social disease we once named Jim Crow, later re-branded as “stop and frisk,” and now given cover under the “see something, say something” motto in our current terror paranoia. Whatever else changes about our culture, the function of the police to act as the proxy agent for violent eviction, brutality and murder of the second-class Black body on behalf of the concerned and vigilant white citizen has remained a shameful constant.

The handshake is being proffered when, for example, a white woman in Oakland calls the police on longtime Black residents (whose unbearable offense was to set up barbecues in the park, as they’d likely been doing in that park for most of their lives), loiters for two hours for police to arrive, and then bursts into hysterical tears claiming she feels she’s been harassed. It gives itself away when the owner of the AirBnB property, whose neighbour called the police on her guests, addresses her adult guests as “kids” and blames them for not waving when they were waved to. And we see it when Sara Braasch, who called the police when she found a Black student napping in the common area, asserts she has “every right to call the police.”

These are the vestiges of a culture that socializes bigots to know whose side the police will take when they arrive, and to have the confidence that if the police escalate the situation to violence there will be no lasting repercussions for the police, or for themselves.

The police are unlikely to face charges for violence committed against us. The callers are highly unlikely to be called out as bigots by the media (“racially charged” is as much editorializing as most outlets can stomach), and while the names and faces of the victims are so often made public, the same is rarely done for the offender. And the broader public, having been fed a steady diet of our banal suffering, is so unmoved by brutality against us that our personal lives are often interrogated with far more vigor than those responsible for our deaths.

Behind all of this lies the ugly reality that the freedom of Black people to live, to move freely and to peaceably assemble is an affront to a society that clings however desperately it can to the remnants of the absolute power it once held over our lives. No white person has ever called the police on Black people “for no reason” (neither, for that matter, have they been made on brown, or Indigenous people “for no reason”). The reason has existed for centuries, and we do ourselves no favours by hiding our faces from it.

That reason is a secret handshake, between white people and white-dominated institutions. And it is sealed in our blood.