How not to legalize weed

Kate Robertson: The first year of cannabis legalization has been an utter disappointment for many of us who do consume cannabis 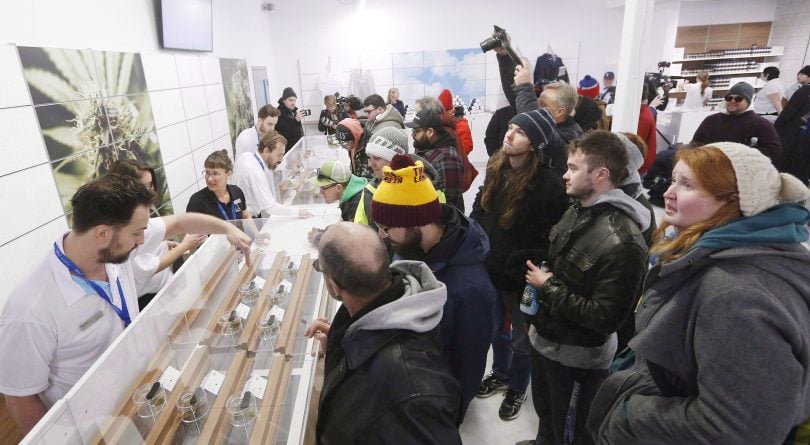 Kate Robertson has covered Canada’s cannabis industry for three years. She has written for the Globe and Mail, The Guardian, NOW Magazine, as well as cannabis-focused publications such as Leafly and Weedmaps.

When I ran out of cannabis on Thanksgiving Day, I had a few choices. I could halt dinner prep for eight guests to visit a downtown Toronto store where I would line up to buy some crumbly, expensive bud from a licensed shop. Or, I could continue mashing the squash after placing a delivery order from my friendly, local unlicensed shop. They take credit card payment at the door, I can redeem loyalty points, it’s less expensive, and the weed? Well, it’s dank.

I’ll let you guess which option I chose.

The first year of cannabis legalization has been dispiriting—not for non-consumers, who we’ve protected from our habit through the Cannabis Act legislation. We haven’t experienced a deluge of crises, and fortunately, most of the concerns outlined in Conservative MP Marilyn Gladu’s anti-cannabis poem haven’t come to fruition.

Rather, it has been an utter disappointment for many of us who do consume cannabis: we were looking forward to safer, better access; a vast array of employment opportunities; the decriminalization of a drug within a legal system that unfairly targeted minorities and the vulnerable; quality products and increased dignity for medical consumers. And while I am fiercely proud of the direction we’ve taken and I’m not proposing we go back to pre-legalization days, I do feel let down by how we’re doing so far.

“For me, it was always: Tackle organized crime and treat Canadians like responsible adults,” says Toronto Liberal MP Nathaniel Erskine-Smith, who defends his party’s legalization plan. “And I think we’ve met those commitments.” I interviewed him because he and I know each other socially—he is the one of two MPs so far to talk openly about his own cannabis use—and I thought he might share some of my concerns. But he lays responsibility for Ontario’s retail challenges at the feet of Premier Doug Ford, who hasn’t seemed particularly interested in the file (although this week the Ontario Cannabis Store announced they have launched a consultation process to ease the bottleneck that’s formed at the provincial supplier).

But let’s talk about the “black market,” or as many of us in the weed world prefer, the unlicensed market (because the question of whether or not a product is technically illegal is very tricky).

How big is it? Statistics Canada has reported steady sales declines and claim about half of the cannabis sold currently is illicit (in other words, $4.16 billion of the industry’s estimated GDP of $8.26 billion is unlicensed). But an RBC Capital Markets report cited by the Globe and Mail puts the regulated market at just 12 per cent of cannabis sales, so I don’t exactly trust the numbers.

But I can tell you that the people who are selling illicit cannabis aren’t particularly concerned about the consequences, as one dispensary worker told me earlier this fall, “Because weed is legal, it’s not a criminal charge that will stay on your record for a long time.”

Erskine-Smith acknowledges there is more work to do, particularly in Ontario. “An incredible idea—the legal market provides what people want and people don’t go to the illegal market,” he jokes. “Consumer demand will push governments in the right direction.”

And since I already have you, can this consumer demand that we design some elements for actual cannabis consumers? How about lower prices, less packaging and better pot? And maybe instead of trying so hard to be the “Apple store of weed”—you look like RadioShack, hon—you could look to what people already love about the illicit sector.

Are we treating Canadians like responsible adults? Globally, we’re leaders in the cannabis industry and we’ve come a long way. But kids aren’t allowed in a lot of shops across this great nation, unlike most booze shops where they can accompany their parents running errands. In some provinces, those responsible adults have to find somewhere to put their kid if they want to grab some pot (busy adults can’t be home signing for packages). Surely we can trust them to decide how to talk to their kids about the regulated products they’re buying.

But what really irks me is how medical cannabis consumers are being left behind. Advocates, the illicit market and the regulated industry all leaned on medical cannabis access to pave the way for legalization. But that access to medical cannabis, which is a constitutionally protected piece, isn’t being honoured—it’s taxed, it’s prohibitively expensive, it isn’t covered by most drug plans, and it’s inconsistent and onerous for sick people, even a full year after recreational legalization.

Private cannabis clinics are often contractually obligated to refer patients to specific cannabis cultivators who pay kickbacks for new patients. That means a medical cannabis consumer can spend months researching where to find the types of products they need only to be denied that access because their clinic won’t receive a payout from that provider. And there is still an excise tax on medical cannabis, a very strange rule intended to keep recreational consumers from infiltrating the medical system. So much for treating us like adults.

Labour continues to be a very big, underreported problem. This country has seen more than 100 new cannabis startups emerge in recent years, and that’s just on the cultivation side. That’s a lot of startups, where employees frequently sign non-disclosure agreements and employment contracts agreeing to be fired without cause, where the corporate world is clashing with stoner culture (remember that?). I have a feeling we’re going to be reading some pretty disappointing stories about how the 9,200 cannabis workers in this industry are being treated as business media breathlessly reports profit margins.

Look, no one was more excited about legalization than I was. But we’re talking about average price differences of $10.23 per gram for regulated versus $5.59 per gram for unregulated products, according to the latest survey results—I can’t afford it! And it’s too inconvenient, and the products are inconsistent.

In September, Global News reported that only 44 Canadians have been able to clear their criminal records through the pardons program, for something that never should have been illegal in the first place. We’re still treating people like criminals—or at least sometimes, anyway.

On this one-year anniversary of legal cannabis, and with more edible and topical products on their way, I’m managing my expectations. I’ll be skipping the anniversary events. I’m sorry, the cannabis industry’s self-congratulations parade really bums me out. And I’ll likely be smoking the last of my precious, dank nugs.