How Ottawa can fight for the rights of Hong Kong-Canadians 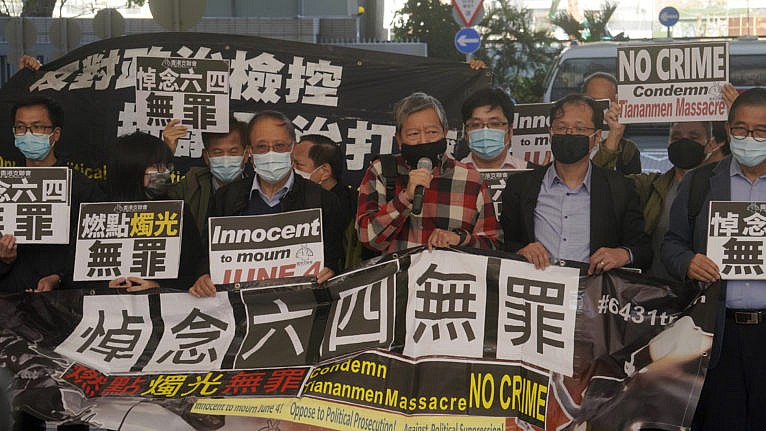 Pro-democracy protestors gather Friday during the court appearance in Hong Kong of two dozen activists charged with unauthorized assembly; the accused had attended a vigil commemorating the 1989 Tiananmen crackdown.(Kin Cheung/AP)

John Williamson is Conservative MP for New Brunswick Southwest, and a member of the House of Commons Special Committee on Canada-China Relations

I was fortunate enough to live in Hong Kong during the handover from Britain to China in July 1997. And while there was much excitement in the air, there was also a great deal of nervousness about the future. Would Hong Kong’s tremendous economic success and vitality be sufficient to convince Beijing to preserve its territory’s unique legal and democratic freedoms as laid out in the Sino-British Joint Declaration?

Not quite half way through that 50-year agreement, we now know the answer: no.

Over the past decade or so, China has slowly and relentlessly moved to make Hong Kong just another Chinese city under the boot of the ruling Communist Party. Following massive pro-democracy rallies in 2019, the first major move in bringing Hong Kong to heel was a sweeping national security law implemented last year that essentially criminalizes political and democratic dissent, including press independence. Political candidates have been arrested and even Hong Kong media mogul Jimmy Lai, founder of the popular Apple Daily newspaper, sits in jail today on subversion charges.

RELATED: The fight for a free Hong Kong isn’t over just because Canada wants no part of it

Now comes the next chilling step—a requirement that Hong Kong residents who hold dual citizenship choose between their national loyalties.

If a dual Canadian-Hong Kong citizen selects her or his Canadian citizenship, the consequences could include the loss of the right to live and work in Hong Kong. Opting for Hong Kong identity, on the other hand, will mean the loss of representation by the Government of Canada—including consular access in the event of legal problems—or even the ability to leave the territory should Beijing abruptly disallow HongKongers the right to travel abroad. It’s another heavy-handed move by China to strip basic rights.

Why now? China has always been a master of the long game, and this is simply more of the same. While Hong Kong remains economically significant to China, its relative importance has shifted considerably in recent years. In 1997 the city represented approximately 20 percent of the entire Chinese economy. Today, after several decades of phenomenal, trade-powered growth that figure is closer to three percent. The political gains from enforcing conformity now outweigh any potential economic losses.

Even so, the immediate departure of all foreign nationals from Hong Kong would be a major blow to China’s standing in the global economy. To prevent this from happening, Beijing has adopted a stealthy approach meant to quietly cleanse the city of troublesome pro-democracy voices. Forcing dual nationals into a Sophie’s Choice on citizenship is an example of this insidious approach.

Canada has a clear and pressing obligation to take a stand. Beyond our responsibilities to speak out about human rights around the world, Canada is a major player in Hong Kong. The estimated 300,000 Canadian citizens living there represent the city’s second largest cohort of dual nationals. Only Britain has more, although most hold subordinate British National (Overseas) passports that China no longer recognizes. Canada has more full-passport citizens in Hong Kong than any other country.

How can Canada leverage this standing as a key participant in this dispute? For starters, the federal government should make it known to Beijing—clearly and forcefully—that the mobility rights of Hong Kong Canadians are sacrosanct and inalienable. Canadian citizenship is not decided by other nations, and Canadian passport holders in Hong Kong do not forgo consular protection or the right to leave China.

Beyond making this displeasure known, there are several other concrete steps Ottawa can take to help those immediately affected. Quickly opening a path to citizenship for family members of dual passport holders would make it easier for Canada to welcome residents who wish to flee Hong Kong. We should also expedite asylum claims made by Hong Kong people involved in the pro-democracy movement since anyone prepared to take a vocal stand on freedom is already aligned with Canadian values.

Additionally, Canada needs to work together with Britain and other democratic allies, including the U.S., France, Australia and New Zealand, to push back against China’s deplorable erosion of Hong Kong’s fundamental democratic rights. Concerted international action will be crucial to forcing a change in attitude within Chinese leadership.

Since the handover in 1997, I have returned to Hong Kong many times, and the territory retains a special place in my heart. I’ve always been impressed by the warmth of the people, and their commitment to the concepts of freedom and democracy—values we often take for granted in this country. With 300,000 Canadian citizens in Hong Kong facing the loss of those basic rights, the rest of us have a responsibility to take a stand on this important issue.