Tabatha Southey offers 12 tips to the former aide of Donald Trump who—whoops!—posted a photo with crosshairs near the head of the judge presiding over his trial 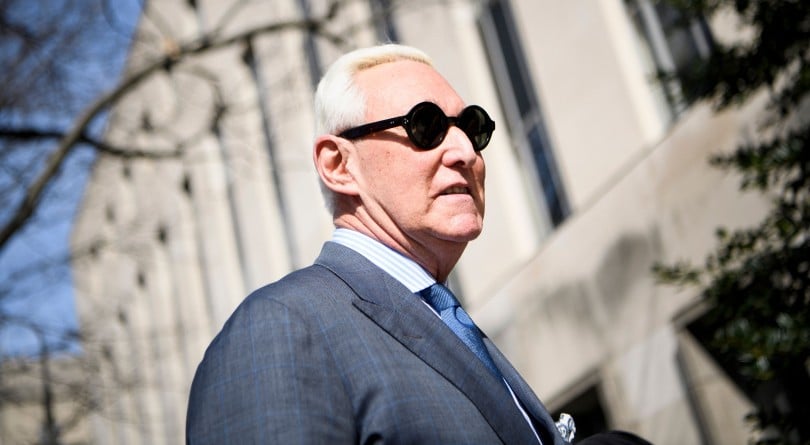 There must be no more disdainful jokes about “teenage” girls. Not after this week, not after a 66-year-old man, who has “a look,” and who possesses what can most charitably be called “very poor tattoo-related decision-making skills” and most accurately called “a tattoo of a smirking Richard Nixon emblazoned across his back” was forced to appear before a judge to explain an incredibly ill-advised Instagram post.

That is exactly what happened to grown man Roger Stone in a court for the District of Columbia in Washington on Thursday. The dressing down of a man with a pocket square is a rare and beautiful sight to see, and there is no question a dressing down is what Mr. Stone got. Judge Amy Berman Jackson was having none of it, and then going back for a second helping of none of it, ultimately delivered a blistering decision. “Mr. Stone could not even keep his story straight on the stand,” she said, before imposing a full gag order on her legendarily loquacious defendant.

The order forbids the longtime political operative, lobbyist and Trump campaign insider from making any statements about the charges he’s facing, including press conferences, press releases and social media posts—and even on Snapchat. No Snapchat. Judge Berman Jackson is not messing around, and this is a ruling that may have left some people shaken, and by “some people” I mean you, Roger, who I know is reading this. You just seem like a self-Googler. It’s OK, I’m here to advise you and everyone faced with the same dilemma.

READ MORE: Roger Stone, a man of many bad names

So, it turns out the federal judge overseeing your trial on one count of obstruction of an official proceeding, five counts of making false statements, and one count of witness tampering doesn’t have to put up with your trolling. Time to ask, what’s the next step? For most people (well, for most of the vanishingly small minority of people who’d manage to put themselves in this situation in the first place), the answer would be to stop talking, put the social media shovel down and try to quietly climb out of the hole they’ve been digging.

Roger Stone, however, is not most people. Roger Stone isn’t even most people who get dragged back before the judge presiding over their trial to try to explain why they posted images of said judge with crosshairs close to her head on their Instagram feed. And so, because I believe everyone deserves a 32nd chance, I’ve put together a list of 12 Roger Stone Friendly Tips for Weaselling Your Way Out of the Really Stupid Legal Jeopardy You’ve Put Yourself In.

I don’t promise any of these tips will actually work, of course, because “Roger Stone Friendly” and “Not A Terrible Idea” are largely mutually exclusive, but they’ll keep you busy and that can be important at a time like this.

1. Consider filing a “Notice of ‘Actually it was My Evil Twin’” explaining to the court that the key to telling the two of you apart is the fact that Your Evil Twin also has a back tattoo, but instead of Nixon marked into his flesh, he has a group portrait of everyone indicted in Iran Contra.

2. Insist to the judge that it’s not a crosshair, “it’s a Celtic occult symbol,” and then, when pressed on the meaning of this “occult symbol,” explain you have no idea because “I’m not into the occult.” OK, here I must confess, I’ve pulled a bit of a Roger Stone-ian “dirty trick” myself. This isn’t a comedically bad suggestion—this is what Roger Stone, Actual Human Being, literally, and with no exaggeration, tried to pull while on the stand being questioned by a woman with the power to throw him in jail. She showed enormous restraint.

3. Fail to clear your social media history of easily searchable evidence that indicates you know exactly what crosshairs look like, what they mean, and that it’s not a happy thing to be in them. Everyone loves a rogue! And with any luck, this display of total incompetence will help the court forget that understanding messaging is literally your job. That’s when you bust out your “I didn’t even notice it until it was brought to my attention by a reporter” act. Wait, checking my notes, I see this bit of absurdism was, once again, something Actually Facing Jail Time Roger Stone seriously tried to claim.

4. Use all your resources. You still have a perfectly good un-beNixoned chest. See if the judge and/or lead prosecutor appreciate you getting their faces tattooed on your body. Don’t ask. Just surprise them, unbutton. Do something fun with the nipples. After all, it’s unlikely that anything you do could make the situation you’ve put yourself in worse.

5. If your “One of my several volunteers who I cannot possibly identify sent me the picture and all I did was add the fun ‘Obama-appointed judge who dismissed the Benghazi charges against Hillary Clinton’ bit” gambit fails, and boy, Roger, did it ever fail, “my dog hacked my Instagram account” is a novel take on an old classic.

6. Explain that there must be some mistake, and if the prosecution just checks their notes, you’re certain they’ll find they never actually caught you out after all. Remind the court that you are an evil genius, the consummate dirty trickster who flaunts what lesser political operatives call “morality” or “good judgment” without a care in the world. It’s practically in your bio! There was a documentary. Try shouting “Don’t you have Netflix?” at the Judge. Be sure to demonstrate just what a rascally rule-breaker you are, talk over the judge to the point where she has to say, “Let me finish my question!” Oh, I see you did that part.

READ MORE: Will America recover from Donald Trump and the Reign of Lies?

8. Remember to plan for your future; even if you do weasel your way out of this, your problems won’t be over. Thanks to your friend Donald Trump, you are now operating in a world where audacity has been largely devalued. The “That guy! I can’t believe he did that!” index is way off and your carefully banked reputation for outrageousness may not buy you what it once did. In a market where Donald Trump manages to exhaust most people’s capacity for “He said what?” in 240 characters or less, before breakfast, you’re going to need to step up your game. The next time you send donations to your favoured candidate’s rival falsely claiming to represent the “Young Socialist Alliance” and then immediately leak the receipts, you do it Through A Ring of Fire!

9. Deny making the post. Deny understanding the post. Admit to making the post, but, whatever you do, do not say that you only made a post carrying what Judge Berman Jackson reasonably concluded was a “sinister message” that might incite your followers to violence because your life is just so stressful right now because she might send you to jail. Oh, you did that. Take it all back. Set off across the country to find the One-Armed Poster!

10. Next time you explain with what you take to be winning sheepishness that you’re “kicking myself for my own stupidity, but not more than my wife is kicking me,” try demonstrating by leaping into the air attempting to kick your own buttocks. Eventually you’ll fall, earning yourself a small delay of the inevitable as the court is forced to stop the proceedings and pick you up off the ground.

11. Stick to what you know. Claim the post was born in Kenya. You never know where it will take you.

12. Trust that Donald Trump will always take care of his contractors and will be there with a pardon for you when you need…no I can’t do it.