Opinion: After a year of anxiety and bellicose Trump tweets, the Olympics offer a rare moment of optimism for North and South Korea. But will it last? 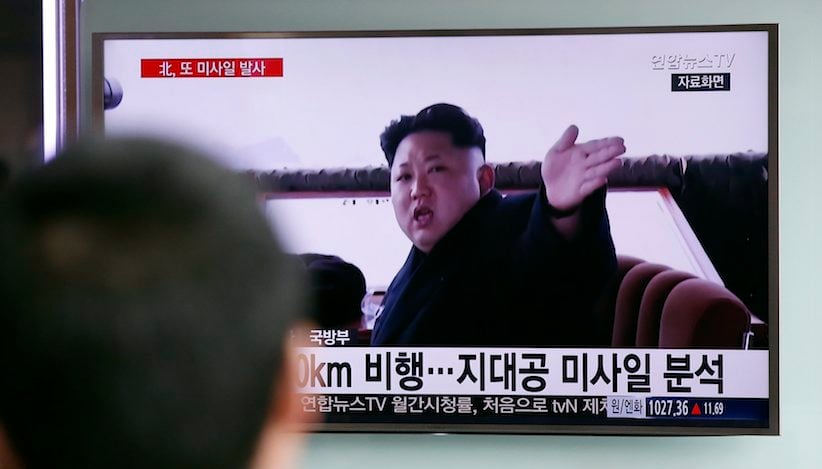 UPDATE (Jan. 17, 2018): South Korea’s unification ministry announced that both South and North Korean athletes would march together under a united flag during the 2018 Pyeongchang Olympics’ opening ceremonies, as well as form a joint North and South Korean women’s ice hockey team for the Games.

Last year, as North Korea’s nuclear weapons and ballistic missile capabilities advanced at a far faster rate than anyone could have imagined, anxiety reached new highs around the world. Coupled with improvements in capabilities in cyber warfare, conventional weaponry, its reservoir of biological and chemical weapons, and the accruing of new allies in the Middle East like Hezbollah and Hamas, North Korea emerged as a threat that can no longer be ignored. With nuclear warheads that can be mounted onto ICBMs or submarine-launched ballistic missiles, the threat has become very real, even for those of us in North America.  The panic was amplified by the constant Twitter exchanges between U.S. President Donald Trump and the North Korean state media, spurring the media to seriously discuss the prospect of war on the Korean peninsula. 2017 was a rough year—not just for Koreans but for everyone concerned about the future of international security.

Yet, in a remarkable turn of events, the relationship between two Koreas seems to be warming up as we look ahead to the Winter Olympics in Pyeongchang, South Korea next month. It will be the first one to take place in South Korea since the 1988 Summer Olympics in Seoul, and South Koreans have been understandably nervous about potential provocations from their northern neighbours. Yet North Korean leader Kim Jong Un’s New Year’s Day address showed a rare conciliatory approach towards South Korea, with a proposal for negotiations on easing military tensions and North Korea’s participation in the Olympics. And the two Koreas are resuming their direct hotline in Panmunjom, after nearly two years of suspension. There will be a high-level talk next week to discuss the logistics of North Korean participation in Pyeongchang, with prospects for continued dialogue. South Korea has promised to suspend joint military exercises with the United States while the Games are on, too—something which has always made Pyongyang anxious.

While much remains to be seen in terms of the outcomes of these discussions, the mere fact that the two Koreas are resuming their direct line of communications again should be seen as a positive step forward—and as a signpost of unprecedented times in the relationship.

MORE: Why Canada needs to step up in the Korean crisis

It was not by a mere stroke of luck that the North Korean regime has changed its approach towards South Korea; in diplomacy, after all, timing matters, and the Winter Olympics in Pyeongchang are looming in February. While South Korea is anxious to ensure that they are a resounding success, North Korea has often used international sporting events to boost its legitimacy as a nation state since the 1970s. Both Koreas have marched together in the past, as they did in the 2004 Athens Olympics, under the banner of “Korea is one.” There are hopes that the small team of North Korean athletes might cross the Demilitarized Zone by foot, which would carry a symbolic message for all Koreans on both sides of the border who hope for an eventual reunification of the two Koreas in a distant future, and some others are calling for a joint figure skating team composed of North and South Korean athletes to compete together in Pyeongchang. Having North Korean athletes and officials in Pyeongchang will likely reduce the chances of military provocation from the North while the Games are on, too, and with the prospect of resuming the high-level talks between Seoul and Pyongyang, there are also high hopes among South Koreans that family reunions might resume in the near future, as well as greater economic exchanges through the Kaesong Industrial Complex.

Indeed, occasions like the Olympics often bring out the most vivid expressions of nationalism, in a raw and vocal fashion that often transcends geographical boundaries. This notion of nation states as “imagined communities,” as coined by Benedict Anderson, is quite relevant to the contemporary Korean context. Yes, there are undeniable political differences between the two Koreas, and economic disparities are growing every day. But regardless of the geographical boundaries and ideological clashes, there remains a sense of comradeship between the people of the two Koreas, one that pre-dates the current political situation. Whenever there is a sporting match involving North Korea, many South Koreans find it natural to cheer for the North Korean athletes, especially over other neighbours in Asia like Japan or China. Although the soldiers are armed to the teeth across the 38th parallel, the Olympics provides a unique chance to embrace a sense of fraternity and solidarity for the Korean people.

Still, the key challenge will be extending the window of opportunity from the Olympics to building trust over the long-term. In fact, South Korean President Moon Jae-In has made it absolutely clear that South Korea must take a “driver’s seat” in resolving the crisis with North Korea, and that pursuing peace and eventually the denuclearization of the Korean peninsula will require persistent efforts to engage North Korea. There are historical precedents, such as the Sunshine Policy from 1998 to 2008, which sought to change the attitude and behaviour of North Korea by warming up the opponent with tools like humanitarian assistance and economic engagements. While the policy itself has not stopped North Korea from advancing their military technologies, there is something to be said about addressing the root causes of Pyongyang’s insecurities. South Korea, under Moon, has promised the North that they are intent on dismantling the old Cold War framework, preserving the North Korean regime, and institutionalizing peace through a new economic map. The latest developments on the Korean peninsula seems to suggest that Moon’s efforts are beginning to show some positive signs. 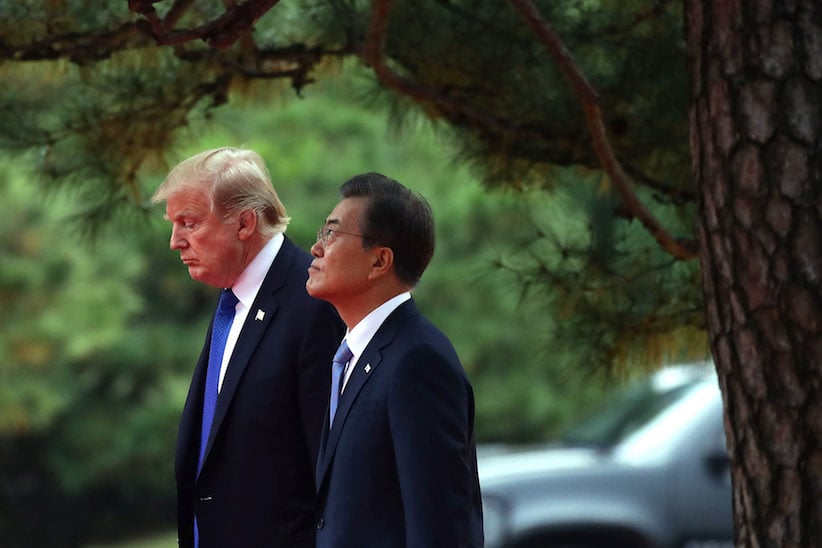 But can sports diplomacy work in the age of Trump? Reckless comments from the President of the United States, like bragging about the size of nuclear buttons (when the only button on his desk is for Diet Coke), do a great deal of damage in terms of American credibility on the global stage. The tweets are also futile: President Trump cannot use Twitter to outdo the Orwellian double-think of the North Korean Central News Agency, and because the regime has long justified their investment in military capabilities using the existential threat from the United States, it is dangerous to raise the chances of misinterpretation and miscalculation. Practically nothing has been consistent in terms of President Trump’s attitude and actions towards North Korea, which makes a coherent strategy difficult—not just for those in Washington, but for allies in Seoul, Tokyo, and elsewhere.

Reconciliation between the two Koreas will be a messy and complex business, especially because of geopolitical interests at play between the United States, China, Russia and Japan. But history has shown that sticks like economic sanctions, verbal condemnations through the UN security council, and especially bellicose Twitter messages, will not convince North Korea to give up nuclear weapons or stop missile tests. In reality, Pyeongyang is desperate for survival, seeking a way to save face and to deal with immense economic and political challenges inside the Hermit Kingdom.

America’s stumbles have provided opportunities for South Korea in the meantime. Traditionally, Pyongyang has preferred to talk directly with Washington instead, since South Korea’s policy on North Korea was almost always in step with the American policy. But with Trump and Moon vocally disagreeing with each other on how best to deal with North Korea, there seems to be a rare opportunity for an assertive and coherent policy from Seoul. Even as the rhetoric between Trump and Kim Jung Un escalated to an unprecedented scale in the past few months with talks of “fire and fury,” Moon repeatedly emphasized that peace is the only viable option—a message that resonated with 51 million South Koreans, many of whom are still living through the painful memory of the Korean War.

It is easy to dismiss the significance of one-time events like the Winter Olympics in tackling the massive challenge of containing North Korea. Some are skeptical about Pyongyang’s true motivations, and others are concerned about the growing divergence between Seoul and Washington in terms of dealing with North Korea. Nevertheless, history shows that diplomacy and dialogue hold so much more promise for dealing with difficult challenges in international relations, especially because the cost of another war on the Korean peninsula is something no one can afford. The Clinton administration, when faced with North Korea’s threats of nuclear developments, used diplomacy to conclude the Agreed Framework. It was far from perfect, but it stopped an immediate crisis and contained the threat that Pyongyang posed to the international community.

As a Korean proverb goes, it is not possible to fill the stomach with the first bite. North Korean leadership will continue to seek to become a nuclear power, and the challenge ahead is to contain the threat rather than deluding ourselves that they will one day give up on nukes. The upcoming high-level dialogue between the two Koreas will only be the first step in warming up the relationship that has been frozen for far too long. Reconciliation will take hard work, and will require a prudent, long-term policy of engagement that addresses the residue of the Korean War and the economic challenges facing North Korea. This is why the upcoming summit of foreign ministers, co-hosted by Canada and the United States and taking place in mid-January in Vancouver, should be lauded. We need a collective and coherent policy on North Korea, rather than a sporadic flurry of panic. As we look ahead to the Pyeongchang Olympics, Koreans will be hopeful—not just for medals, but also in the idea that peace has a chance.