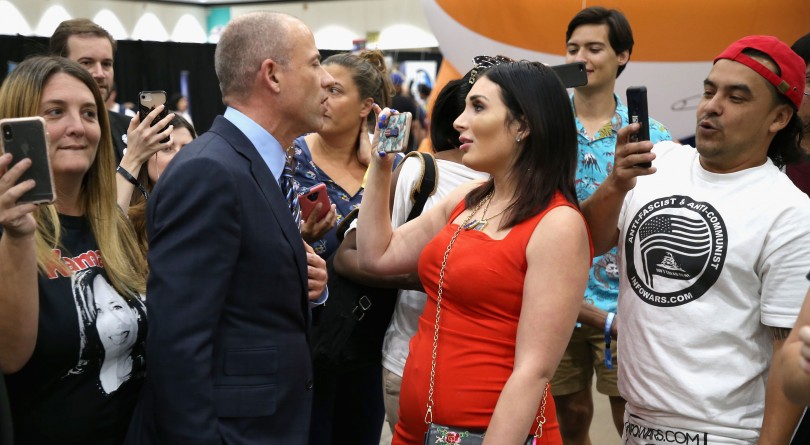 Last week Laura Loomer, a far right far-right media personality, got herself permanently banned from Twitter for an Islamophobic tweet about Minnesota representative-elect Ilhan Omar. On Thursday, Loomer responded as any sensible, mature adult removed from a social media site would do, by handcuffing herself to a door of Twitter headquarters in Manhattan. Loomer, who is Jewish, wore a Yellow Star, carried a megaphone and held a sign with one of her tweets printed on it.

“Twitter is upholding Sharia when they ban me for tweeting facts about Sharia law,” Loomer yelled early on in a Periscope live stream, continuing the long “provocateur” tradition of not having the foggiest idea what Sharia is. Honestly, you’d think these guys had all got themselves banned from Wikipedia.

Twitter and the police responded well to the incident. Loomer could stay as long as she wanted, the police said, Twitter was not pressing charges. Essentially, they muted her, and Loomer stayed, physically strapped onto Twitter, belting out pronouncements like, “I’m here today to stand in solidarity with the millions of conservatives around the world who have been silenced,” making demands like “I want my Twitter,” and whining about the cold weather before asking to be wire-cut free.

This was quickly done, though leaving her there must have been tempting. Surely this was a test of Twitter’s character limit.

Loomer’s protest lasted about two hours, during which time she showcased her famed talent for articulately presenting radical ideas by passionately informing onlookers that she had not “eaten or drunken today” but was nonetheless ready to “pee on” herself if she had to.

The thing Loomer, even Loomer, understands is that de-platforming works. She needs a well-populated public space upon which to pronounce, attack, offend and thus fundraise and recruit. She went down to Twitter, handcuffs in hand, desperate to try and save her public life. Loomer is convinced that she must be on Twitter if she has any hope of maintaining the particularly stunty brand of fame she has cultivated for herself there, and about this one thing she’s pretty much right. But that she needs it doesn’t mean that Twitter is obliged to host her as she tweets her glee that 2,000 migrants died crossing the Mediterranean with a clapping hands emoji and a “Good. Here’s to 2,000 more” and the like.

Loomer’s fans, and even some non-fans, often argue that removing someone from a platform is a violation of that person’s right to free speech, but of course it’s not. If your next-door neighbour is a ham radio enthusiast, he’s not obliged to let you broadcast on his kit. It doesn’t matter how many other people he lets use his radio, or how much you like using his radio, or how many people like listening to you on his radio, he can write, change and interpret and enforce his own terms of service as he chooses and he doesn’t have to let you be on his radio.

He certainly doesn’t have to keep letting you use his radio after the 100th time you use it to broadcast hate speech. He may eventually realize that having you around is alienating all the non-racists he likes to sharing his hobby with and boot you off. If you get your jollies insulting, demeaning and drumming up ill will towards a vulnerable minority, he might cut your mic, and if your neighbour takes away your microphone privilege, he’s not taking away your right to free speech.

You are still free to stand on your front lawn and tell passersby that your neighbour is in the pocket of George Soros and that’s the reason he won’t let you use his platform all you like to accuse Muslim elected officials of being part of a sinister plot to destroy America.

You can even build your own radio. You can hold up dumb signs and have everyone laugh at you. You can just go to Gab.

Some worry—and some gloat—that banning the likes of Loomer from a platform only adds to their mystique, builds their brand, turns them into martyrs, makes people all the more interested in hearing what they have to say. I don’t think that’s true, but out of curiosity, I reached out to some of Loomer’s fellow valuable conversationalists for comment on this topic.

I wondered, for example, what Milo Yiannopoulos, Gamergate booster, white nationalist mainstreamer, pedophile apologist and almost-but-not-quite-on-account-of-the-pedophile-stuff CPAC speaker, known as “@Nero” on Twitter, had to say. I reached out to Milo on one of his favourite platforms, a platform on which he made converts and encouraged those already in his camp to torment people, and he got back to me right away, saying: “This account has been suspended. Learn more about why Twitter suspends accounts, or return to your timeline.”

This was less than illuminating, but I think his post on Facebook complaining, “And when I get dumped from conferences, BARELY ANYONE makes a sound about it—not my fellow conservative media figures and not even, in many cases, you guys,” indicates that the much celebrated Streisand Effect isn’t really coming through for him.

I could try harder for comment from the de-platformed. I could reach out for an interview with Milo, or Loomer, or Alex Jones, who has been banned from platforms that have not even been invented yet, but odds are they’d all show up, paying their own airfare, two hours early, with snacks, and they might never leave.