Andray Domise: This structure not only eroded the modes that Africans had long thrived on and carried out in their tradition, it drove the production of social and environmental ruin 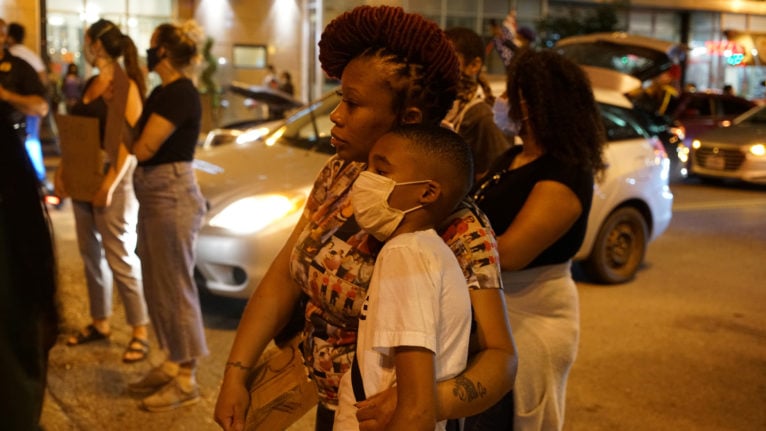 A woman embraces her son during a protest against the death in Minneapolis police custody of George Floyd, in St Louis, Missouri (Lawrence Bryant/Reuters)

A century ago, historian and civil rights activist W.E.B. Du Bois published a literary tome entitled Darkwater: Voices From Within the Veil, as both an autobiography and discourse on African history. In it, he emphasizes the importance of Black women and their centrality in the Black family.

He posits that the Black concepts of motherhood and femininity, and Black families’ historical system of rule by women and mothers, gave the world “not only the Iron Age, the cultivation of the soil . . . the domestication of animals, but also, in peculiar emphasis, the mother-idea.” That is, the conception of the mother as creator and sustainer, rather than the patriarchal builder with which the Western world is most familiar.

Du Bois’ passage, and the chapter itself titled “The Damnation of Women,” stood out then for its indictment of white supremacy in its attempts at destroying African notions of family and community. A century later, the passage leaps from the page, as the well-worn trope of the “broken” Black family—led by burdened mothers, in the absence of capable fathers—has once again been summoned from the crypt to force the nuclear family on Black communities.

Jamil Jivani, author and “advocate for community opportunities” under the Ford government of Ontario, this time leads the rearguard tilt at the windmills against “out-of-touch Twitter activists [talking] about defunding the police” and, for some reason, Black Lives Matter. Jivani, according to a tweet on July 7, seems to believe Black Lives Matter is short for “Black lives matter only if they’re killed by cops so don’t ask us about gangs and also we hate the nuclear family and capitalism but don’t ask about that either.”

In another tweet on July 23, Jivani claims the organization “excludes fathers” in their statement of beliefs.

On the Black Lives Matter website, the organization states: “We disrupt the Western-prescribed nuclear family structure requirement by supporting each other as extended families and ‘villages’ that collectively care for one another, especially our children, to the degree that mothers, parents and children are comfortable.”

READ: ‘As a queer, trans and Afro-Indigenous woman, I believed that I could never be a representative of Black liberation’

None of this is new. The peculiarity of the Black family, which has always been of deep interest to the state and colonizing forces of white supremacy, is this: the strength and pride in Black femininity, motherhood and yes, matriarchal tradition.

I want to make something very clear: the most brutal social structure that Western civilization has managed to force on the present-day Black family—the African family—is the alienating nuclear family structure. This structure not only eroded the modes that Africans had long thrived on and carried out in their tradition, it drove the production of social and environmental ruin.

Single family homes, suburban blight, gentrification, and commuter and consumer cultures cast billions of tons of climate-changing gases into the atmosphere each year. The nuclear family is competition with one’s neighbours and family, rather than communal living, space-sharing and strength in the face of oppression: it is the erasure of our history; the replication of white supremacy with Black silhouettes.

In addition to the dispersal of families, the nuclear family model discourages African-rooted practices such as community fostering, fictive kinship, social fathering and other means by which Black people have counteracted the shearing forces of white supremacy.

The theories of historic race essentialism (such as that of French historian Jules Michelet) deemed these values to mark Africa as “woman,” and “her races” as “feminine.” Hundreds of years later, the theory proffered by the U.S. government’s Nixon administration on the Black family (commonly known as the Moynihan Report) concludes that “the Negro community has been forced into a matriarchal structure which, because it is [too] out of line with the rest of the American society, seriously retards the group as a whole, and imposes a crushing burden on the Negro male, and, in consequence, on a great many Negro women as well.”

This, of course, is hogwash. The nuclear family, and its individualized units led exclusively by patriarchs, are not of Black traditions.

These are concepts that deserve to be rejected in favour of our own traditions and histories—including the “mother-idea” Du Bois conjured—with which we ought to develop better relations. And these are concepts that, as uprisings against white supremacy and the evils of capitalism lay the contradictions of oppressive systems bare, need to be thrown overboard by the masses as we engage on this rebellious passage.

This column appears in print in the September 2020 issue of Maclean’s magazine with the headline, “We are not the nuclear family.” Subscribe to the monthly print magazine here.