Tabatha Southey: Millions of North Americans sought emergency refuge from cold temperatures and hot takes about what happened to all those record highs 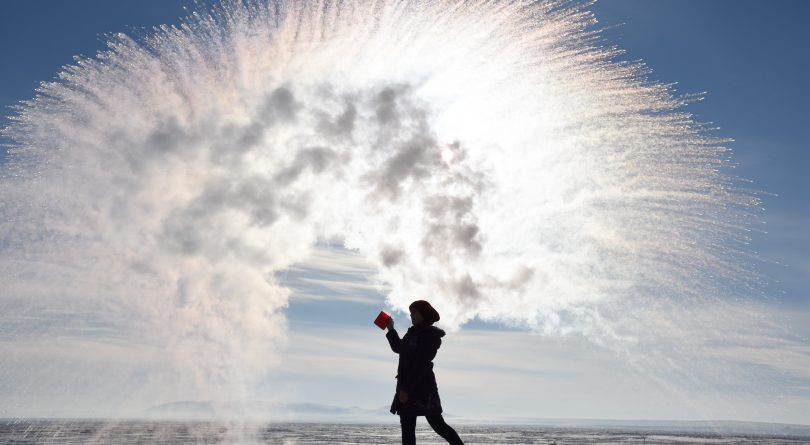 A woman tosses hot water into the freezing cold air, at a temperature of minus 20 degrees Celcius in Kars, Turkey on Jan. 20, 2019. (Photo by Ismail Kaplan/Anadolu Agency/Getty Images)

Forecasts that temperatures would plunge this week had people across the United States and Canada bracing for icy roads, heavy snowfall and record numbers of “So much for global warming!” jokes, but many were still caught off guard at the sheer force of the event.

Despite warnings of hazardous conversation conditions, advice to stockpile changes of subject and to dress appropriately for the weather (remember to wear hats, gloves and earbuds at all times), many offices reported lower productivity and high rates of absenteeism. Thousands of employees were still ill-prepared for the onslaught of “Sure would be nice to have some of that global warming we keep hearing about” banter over at the coffee station in the morning and some struggled to cope.

“It was minus a million degrees and I didn’t make it into work on Wednesday,” said Douglas Goodwin, a broker on Toronto’s Bay Street. “I mean, I didn’t stay in because of the cold or anything, but Tuesday I got caught in a flurry of Spence from accounting’s, “Well, this’ll show Al Gore” and the next morning I just couldn’t open my front door.”

Environment Canada issued warnings that extreme cold can cause frostbite and hypothermia and advised people to watch for symptoms related to the conditions. These include shortness of breath, muscle pain, chest pain, weakness and numbness and complete scientific illiteracy.

In many North American cities, traffic ground to a halt as millions of drivers simultaneously stopped their vehicles to bang their heads against the wheel when “that idiot on the morning radio show,” as one commuter put it, launched into his combination weather report and “What’s the deal with the essentially universal scientific consensus that climate change is real, man-made and the consequences will be catastrophic?” bit.

Those on public transit fared better. Even in this extreme weather, the universal law against making eye contact, let alone conversation, on the subway held strong. Most transit was overcrowded and barely moving of course, but at least no one was saying, “What they don’t tell you is it’s the Urban Heat Island effect…” during the ride.

RELATED: Why do adults in Ottawa wear snow pants on the bus?

With many businesses shuttered, employees changed their out-of-office responses to “I’m away from my desk right now and, if that’s you, Dad, actually, record highs have outnumbered record lows 61 to seven.” Then they settled in with a cup of hot chocolate, a heavy blanket, a laptop and a warm power supply to yell at their screens when the president of the United States tweeted out, again, the very climate change joke they’d stayed home to avoid.

Many districts’ schools closed rather than force children to hear Mr. Gibson, the phys ed teacher, say, “I guess soccer and global warming are cancelled today” and laugh at his own joke, leaving the kids staring blankly at their scorched earth, flooded-plains future.

“Exposure to quips that far below wit level have been known to cause everything from blistering looks to frigid side eye,” said Eleanor Tory, a Grade 7 science teacher at College Street School who sat next to Mr. Gibson for a 90-minute staff meeting during the last cold snap and heard all about the YouTube video he saw about sunspots one time that really made him think. “The board of ed was putting the students first,” she said.

Despite appearances, the United States Postal Service did not renege on its apocryphal vow that its couriers will not be stopped by “snow nor rain nor heat nor gloom of night.” While delivery was suspended in many areas, the decision to stop service had little to do with any meteorological phenomena.

READ MORE:On climate change, there aren’t ‘two sides.’ So why do some feel otherwise?

“It’s the same exhausted line, door after door. We need to avoid employee exposure to bad bad weather jokes. There is no treatment for frozen smiles,” said a union representative, “and lack of protection over prolonged periods from extreme ill-informed jocularity has been known to leave our members suspended on front porches, fliers in hand, trapped in a politely-nodding-vegetative state.”

“You know what I miss?” said Gavin Brown, conscientious owner of a corner lot, two hours and 27 neighbours into shovelling. “I miss ‘Cold enough for ya?’ Those were the days.”

With predictions the wind chill in Chicago was set to plunge to between -40C and -60C, Michelle Wing and Tyler Wójcik opted to cancel their long-planned wedding.

“It’s not the cold,” said Michelle, “I’ve got one of those parkas, yeah, those parkas. Cost me as much as a wedding dress anyway and it keeps me toasty. We were all set to go ahead but then I saw that my dad had written had written a ‘maybe it’s the carbon tax we should be shovelling’ joke into his speech and…”

“I’m not sure I can marry her anymore,” said Tyler.

RELATED: Canada’s climate shift will require everyone to get on the same page

The extreme cold also had a disastrous effect on air travel across the continent. Thousands of flights were grounded when members of air crews had to be pulled screaming from their planes after trying to carve “WEATHER IS NOT CLIMATE” into their co-workers foreheads with plastic airplane meal forks.

While the cold snap will end over the weekend, the conversational effects are predicted to linger. Meteorologists caution that a strong dad joke front is moving in from the Midwest. A particularly uncomfortable variant of the always awkward dad joke inevitably follows in the wake of unseasonably cold weather, perfectly seasonable cold weather, and “not really that cold, but the flip-flops were still a poor wardrobe decision, Dad” weather, experts cautioned. There it often meets with a pundit hot take front turning family dinners into drama whirlwinds.

As well, the Own the Libs vortex—a phenomenon caused by a mass of people who know damn well that climate change is real but think it’s very funny and/or politically expedient to pretend they don’t—can cause extremely unpleasant conversational and political events.

Check your local forecasts, and it is always a good idea to inspect the items in your home emergency kit at the start of each winter season to ensure you are properly prepared for any type of hazardous winter weather chit-chat.

Make sure you have candles. A quick, “I have to go now, Brenda, I left a candle burning” can be all it takes to save your day and practice your conversational escape hatches.

Reports are that in the past week, three out of every 10 adults in North America have backed slowly out of a room claiming, “I’m afraid I gotta leave now. I left my cat…unlocked…on the stove.” Don’t be—or listen to—an entirely made-up statistic.