How to really stop Russia: A million little carrots

Scott Gilmore: What can the western world do when it runs out of sticks? How about a million little incentives aimed not at Russia, but at Russians who reject the war. 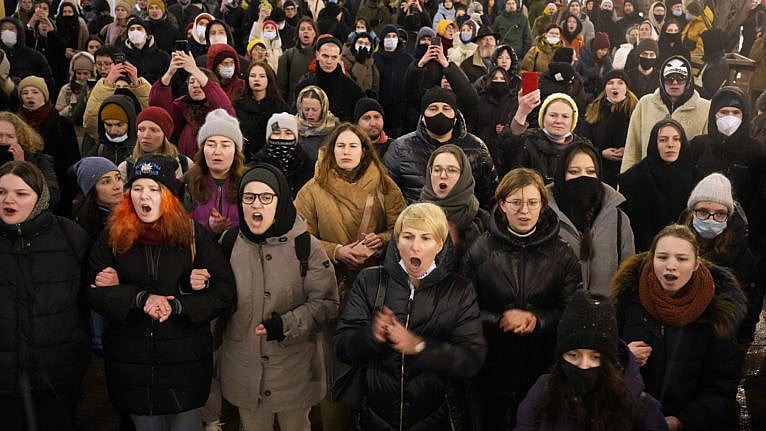 The western alliance has moved quicker and implemented more sanctions than anyone would have predicted just a week ago. Yachts are being seized, flights are cancelled, central bank reserves are frozen, and markets have crashed. Pretty much every possible sanction be it legal, economic, or political has now been applied to Russia. It is true that in many cases the world could go further, but not by much.

And, unfortunately, this historically harsh set of sanctions has failed to move Putin. In fact, judging by the most recent phone call between the Russian President and his French counterpart Emmanuel Macron, Putin may even be digging in deeper. With no more obvious sticks, short of entering the war directly, the world must turn to the idea of carrots, but there are few obvious options.

This is partly because Russia has violated so many international norms—including now the intentional bombing of civilian populations—that it’s hard to imagine a politically viable way western leaders could offer Moscow any reward for even an immediate and complete withdrawal.

Furthermore, it is increasingly apparent that Putin would not be tempted by even the largest carrots. He has staked his empire on this war, and anything less than the complete occupation of Ukraine could mean his political, and possibly even personal, demise.

Perhaps, then, the west should consider an alliance wide-strategy of offering a million little carrots aimed not at Russia, but at Russians.

For example, the Ukrainian government is now promising Russian deserters 5 million rubles (approximately US$47,000), which is 450 times more than what the Kremlin pays the families of soldiers killed in action. NATO and the EU could match that and add an offer of asylum for them and their families. In fact, some legal scholars believe that under international law, western nations would be obligated to treat deserters as refugees.

Even if each deserting Russian soldier was offered a huge bounty, say $100,000, it would still be incredibly cost effective when you weigh it against the price of supporting a protracted war, or the cost in men and material to remove that soldier from the battlefield in the traditional fashion.

This strategy could be applied more widely. For example, some of these million little carrots could be offered to Russian diplomats. We have already seen at least one resign in protest, but there could be hundreds more if the western alliance also dangled in front of them a path to citizenship and a stipend to cover living costs. This may seem unfair, but the world needs to be pragmatic about this and realize that bigger fish will require larger bait.

For senior military staff or Kremlin officials in Moscow, maybe even notable journalists or celebrities, we could also offer a path to citizenship and an even larger stipend. And while it is harder to defect to the west from within Russia itself, it would still only require a short walk to the nearest Embassy. (Where, I grant you, they may end up waiting awhile, so best to pick a mission with a good chef.)

And for the biggest fish, the oligarchs, the carrots could be very large—the west could offer the return of half of their seized assets (the other half being given to Ukraine as reparations).

But for them and all the rest, there would be one very important catch. All of these little carrots would require a recorded video statement explaining their opposition to the war and urging others to join them.

If thousands of these testimonials were shared in the media and online, coming from powerful Russians and lowly conscripts both, it would be almost impossible for the Kremlin to control the narrative domestically. It would be a body blow to morale, and it would handicap further attempts at disinformation and propaganda.

But, most importantly, a million little carrots strategy would remove Russian boots on the ground. If you consider the slow progress of the Russian military after (according to Pentagon estimates) 90 per cent of the troops assigned to this invasion have already been deployed, it is clear that even a small number of deserters will have a disproportionately large impact on Moscow’s ability to fight this war. (And the west shouldn’t discount the disruption caused by removing bureaucratic butts from desks, either.)

In previous wars, bounties for defectors were communicated by dropping leaflets behind enemy lines. Luckily, in the 21st century, dangling a million little carrots in front of Russians could be done much more easily. Our intelligence agencies have the cell phone numbers of every senior official in Moscow, every diplomat abroad, and every officer on the ground—and for them a simple text message or even a call would suffice. (Interestingly, the Ukrainian government is now sending automated calls to Russian numbers.) For the rest, social media, broadcast radio, and billboards on the road to Kyiv would work fine.

There has never been an opportunity in the past for one side of an armed conflict to reach out so immediately and directly to the populace of the other side, and to offer each of those citizens a very personal bounty for helping to end the war. And there has rarely been the unity we now see among the western allies, which would allow for such a sweeping strategy, and the requisite costs and absorption of asylum seekers.

Implementing a million little carrots strategy would require alliance-wide coordination. But, over the course of the first week of this war we have learned our leaders, our parliaments, and our governments are capable of moving extremely fast and moving together when the stakes are this high.