How to win friends and influence some prejudiced people

Opinion: Most people aren't virulently prejudiced—and research suggests there are ways to help others find clarity around their soft bigotries 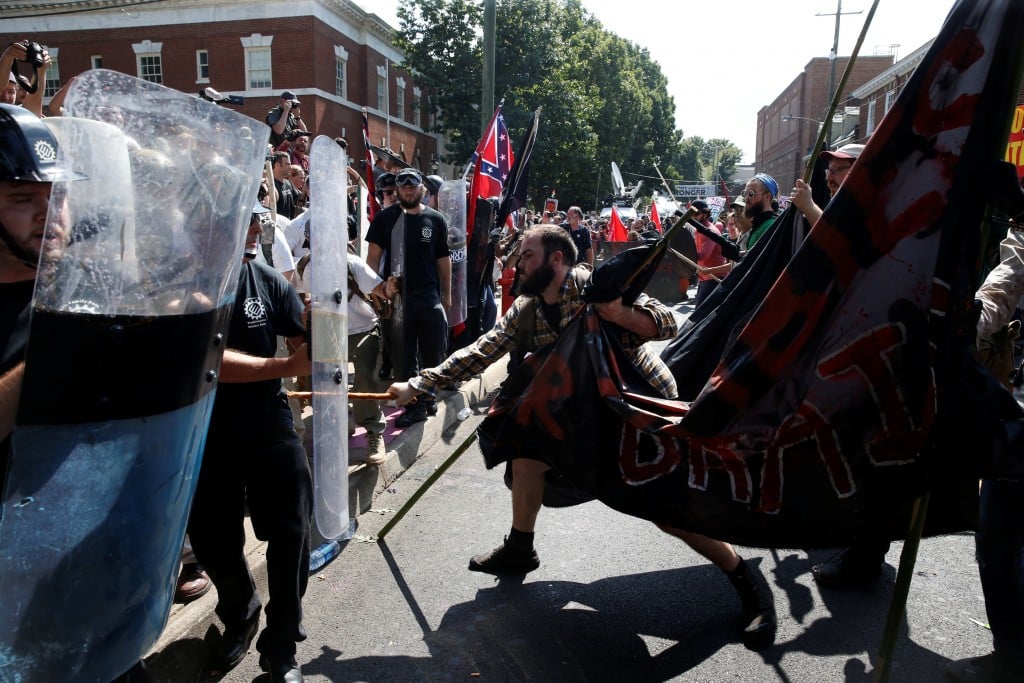 Members of a white nationalist group clash against a group of counter-protesters in Charlottesville, Virginia, U.S.—a more intense, heightened example of the soft bigotries that people face on a day-to-day basis. (Joshua Roberts/Reuters)

One year ago on C-SPAN, Heather McGhee—an African-American woman and the president of Demos, an equality-focused public policy organization—was the featured guest of a call-in program in Washington. Half an hour into the broadcast, a caller introduced himself as Garry from North Carolina, and made a remarkable request: “I was hoping that your guest could help me change my mind about some things,” he began. “I am a white male, and I am prejudiced.”

Garry said his views were rooted in fear—among other things, the fear of black crime and “young black males” needing to turn to crime “to get money for drugs”—and he didn’t want to think or feel that way. But he didn’t know how else to feel.

McGhee, recognizing that Garry had for some reason found a friend in her, took a deep breath and thanked him for being honest, and for opening up a conversation that, too often, isn’t had. “Asking the question you asked, ‘how do I get over my fears and my prejudices,’ is the question that all of us … people of all races and ethnicities and backgrounds hold onto these prejudices … your ability to just say ‘this is what I have, I have these fears and prejudices and I want to get over them,’ is one of the most powerful things that we can do at this moment in our history.”

McGhee recognized Garry’s aversive racism—“I don’t want my fears to come true, so I try to avoid… and I come off as prejudiced”—and gently and non-judgementally addressed the racist assumptions Garry listed before offering concrete suggestions of how he could work to counter and confront those fears, like visiting a multi-ethnic church, getting to know non-white community members, fostering conversations about these fears with family, and learning more about African-Americans in the country.

The compassion offered by McGhee not only allowed for a truly constructive bit of discourse, it provided a direct refutation to Garry’s belief that blacks were inherently angry, aggressive, and dangerous. Had McGhee mocked or chided Garry for his beliefs, or responded in the way that’s become far too common across social media—vindictiveness or dismissal—Garry’s fears would seem justified, and that small window for change would be forever sealed.

MORE: A rabbi considers the events in Charlottesville

When it comes to racial prejudice and intolerance, there are far more Garrys than there are David Dukes or Richard Spencers—a sentiment that, in today’s charged climate, can feel false. On its own, that August weekend in Charlottesville where toxic male aggression, combined with seething racial tensions and overt white supremacist ideology, inevitably ended in violence, would seem to prove otherwise. But while this degree of far-right extremism and neo-fascism needs to be explicitly called out and unequivocally denounced, it would be a mistake to assume that racist, bigoted, or discriminatory beliefs are wholly indicative of the individuals who harbour them.

However morally satisfying, viewing racism through a Manichean lens—where people are either evil or good, “racist” or “not racist”—misunderstands the complexities which drive the formation of irrational beliefs and misguided assumptions of someone else. It assumes—wrongly—that all people who hold racist views explicitly choose to hold them. Quiet, implicit biases, for instance, are often come by honestly. And while no one is free of them—within every race and ethnicity you’ll find varying degrees of prejudice toward specific others, as it’s part of an evolutionary in/out group tendency—there are differing degrees of awareness to individuals’ own soft bigotries.

Knowing this makes it easier to accept that good people—including those you may know and love—can hold deplorable views without being fundamentally deplorable human beings, and in getting beyond the desire to write off those who maintain such views as entirely irredeemable, you can actively work toward challenging—and changing—their flawed mindset.

While some eagerly embrace intolerance, many are reluctant to acknowledge—or may be entirely blind to—their own prejudices, because those quietly acquired beliefs are so far out of line to their consciously held morals. As Ta-Nehisi Coates observed in 2013, “we believe racism to be the property of the uniquely villainous and morally deformed, the ideology of trolls, gorgons and orcs. We believe this even when we are being racist.”   It’s easier to cling to the “white hood” theory of racism—the notion that hateful people like Duke are the epitome of the problem—than to confront our own subtle, insidious views about a given other. This makes harmful beliefs pertaining to race and matters of social justice so notoriously resistant to change. While there’s no single foolproof approach to changing misguided ideas, what’s been proven the least effective and most counterproductive effort is the shaming method.

“When people have their self-worth validated in some way, they tend to be more receptive to information that challenges their beliefs,” said Peter Ditto, a psychology professor at UC Irvine—that is, treating the person as worthy of debate, no matter how unworthy you’ve deemed their opinion, creates opportunity for constructive dialogue. Because mood factors into how receptive we are to new information or different ideas, direct antagonism—whether through point-scoring, name-calling, or the use of epithets (which includes the allegation of being “racist”)—immediately puts the other on the defensive, which not only kills any chance for discussion, but instinctively drives a doubling-down on the problematic beliefs.

Further, by separating the person from their views, thus removing any sense of moral failure or shame on their part, you can more effectively, even directly, challenge the faulty beliefs without attacking at a personal level. In acknowledging someone’s identity outside of a particular view, you provide assurance that while you may find their point of view detestable, you don’t hold them personally so. When people respect your approach and feel they’ve been fairly heard—that care has been taken to consider a point of view they may hold passionately—they are increasingly likely to consider your counter-argument.

Once you’ve started some dialogue, asking the other to expand on their specific idea—giving them full opportunity to explain, in detail, precisely why they hold that opinion—will open them to the limits of their own understanding. It’s easy to hold some gut-level belief, but given how those often arrive without conscious effort, asking for in-depth reasoning will expose the absence of it, and without any effort on your part. Even if the person’s mind isn’t changed, the introduction of doubt to one’s certainty can help begin the education process. And if you can’t offer a thorough response yourself, to help fill the information gap the other has revealed, then chances are your own knowledge of the matter isn’t as complete as you believe it is. This presents an opportunity for you to broaden your own understanding and deepen your knowledge, which will then strengthen your argument down the road.

In The Knowledge Illusion: Why We Never Think Alone, co-authors Steven Sloman and Philip Fernbach explore the limits of knowledge, and the precise role that groups play. The way we rely on the expertise of others to make personal sense of the world is what sets the stage for over-confidence in what we think we know. Leaning on others’ knowledge without a full understanding, over time, creates the illusion that we ourselves possess the expertise.   “This is how a community of knowledge can become dangerous,” they observe. “As a rule, strong feelings about (fraught political) issues do not emerge from deep understanding.” Exploring the complexities of an issue and patiently working through the details offers the best chance to “shatter the illusion of explanatory depth and change people’s attitudes.”

Another promising approach deals with the precise framing of debate. By appealing to the moral concerns of the person whose beliefs you’re challenging, you can work toward finding common ground. “There’s this tricky difference between moral difference and the absence of morality,” notes Matt Feinberg who, along with Robb Willer, studies effective persuasion across ideological lines.

Jonathan Haidt studies the psychological foundations of morality, and his book The Righteous Mind: Why Good People are Divided by Politics and Religion introduced the Moral Foundations Theory, positing that liberals and conservatives are uniquely motivated by five distinct moral dichotomies that frame their thinking. Liberals, for instance, place greater importance on matters of care/harm and fairness/cheating, while conservatives value the concepts of loyalty/betrayal and authority/subversion. These competing values, in part, fuel the Black Lives Matter vs. Blue Lives Matter fight.

Take, for instance, the case of Jeronimo Yanez, an officer with Minnesota’s St. Anthony Police Department, who was acquitted in June on all charges of criminal wrongdoing in the shooting death of Philando Castile, a black man who he’d pulled over on account of a broken tail light. Castile was, by all accounts, the sort of man conservatives routinely suggest are absent in black communities—his record was clean, he was a role model for local youth, he had a job and a girlfriend and served as a father to her four-year-old daughter. Castile’s life approach, described by a longtime friend, was always “‘play it by the books.’ ”

Dashcam video revealed Castile as attentive and respectful toward the officer when he was pulled over, and showed he proactively informed Yanez of the presence of a gun which he was fully licensed to carry. Mere seconds later, Yanez opened fire, unloading seven rounds into the car, five of which hit Castile.

MORE: A blood pact takes another Black life. Who is listening?

Conservatives who’d always found reason to justify previous deaths of black men at the hands of police, but who decried the officer’s acquittal in this case, were able to find common cause with Castile largely because of the Second Amendment aspect. That moral frame forced them to see not a black man—someone who was “other”—but a fellow patriotic American whose black life should have mattered.

That’s no small revelation. And yet, while many champions of police reform welcomed the conservative advocacy, some couldn’t help but fall back on the call-out/shame cycle, admonishing for “not listening” to what the black community had long been saying.

While frustration is understandable, scolding someone you’ve been trying to reach for making real progress—no matter how delayed—is ultimately self-defeating. What’s more important here: self-righteous point-scoring, or welcoming an ally from the other side to help work toward a now-common goal?

There is courage in admitting to beliefs which could be deemed a moral shortcoming. Making oneself vulnerable in order to become a better person is a harder choice than it ought to be. Making that choice an impossible one—by always greeting honest effort with hostility—guarantees an end to progress. There is also tremendous bravery in responding with compassion when, throughout life, you’ve been afforded none. Though it seems unfair that the bulk of effort to counter harm rests with the those who’ve borne the brunt of it, that’s what social justice activism is about: to persuade those who feel they have nothing to gain by challenging an injustice, to see themselves in the cause, and join it.

You cannot force someone’s change of heart. But you can lead in a way that might entice one.