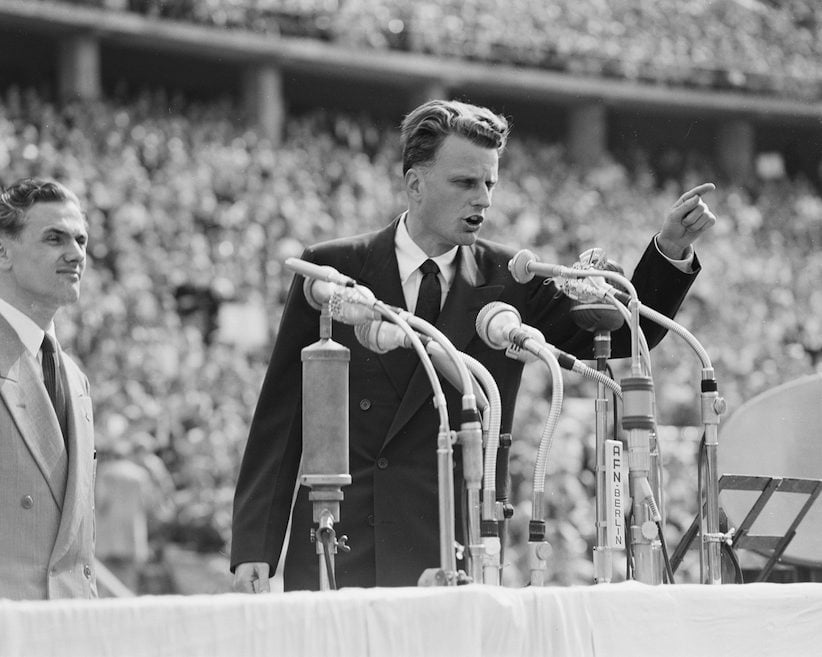 In this June 27, 1954 file photo, evangelist Billy Graham speaks to over 100,000 Berliners at the Olympic Stadium in Berlin, Germany. (Werner Kreusch/AP)

Kevin Kee is dean of the Faculty of Arts and a professor of history at the University of Ottawa.

This week, the body of the late Christian evangelist Billy Graham lay in honour in the rotunda of the U.S. Capitol, the home of the United States Congress. A “North Carolina country boy” who would go on to become “America’s Pastor,” Graham embodied in life, and now symbolizes in death, the power of evangelicalism and public religiosity in the United States—and, for Canadians, a reminder of the profound differences between the religious and political culture in the U.S. and Canada.

But while Graham has been lauded for his superstar quality, history overlooks the fact that when he was getting his start in the 1940s, a time when large-scale revivals were an institution in the U.S. but also in English-speaking Canada, the brightest evangelistic star was not the lanky North Carolinian, but his friend and confidant, Torontonian Charles Templeton. And in the story of these evangelists lies clues that help explain the changes in the religious landscapes of the two countries in the years that would follow.

Templeton was born in Toronto in 1915, then born again at a revival service in 1936. This conversion experience would determine the next twenty years of his life. He began preaching on street corners, then graduated to churches, and by the mid-1940s he was pastor of one of Toronto’s largest assemblies, the Avenue Road Church of the Nazarene. He was also leading some of the largest revival gatherings in North America, including rallies that packed 16,000 into Maple Leaf Gardens.

He gravitated to others who shared his passion for evangelism, and Graham became one of his closest friends.  They were often featured together in revivals in the United States. Templeton was widely acknowledged as the more gifted of the two, and in the eyes of many was on the verge of becoming North America’s next great evangelist; in fact, when the National Association of Evangelicals published portraits of leaders “best used of God” in 1946, Templeton was pictured, but Graham was left out.

The pair shared the triumphs of evangelism, as well as the tribulations—and in the late 1940s, they simultaneously experienced a crisis of faith.  The different ways in which they resolved it sent their careers in separate directions, and left a lasting impact on revivalist religion and politics in their home countries.

READ MORE: Religion isn’t dying. It may be rising from the grave.

Despite their success, Templeton and Graham had doubts about some of the central tenets of evangelical Protestantism.  Particularly problematic for both of them were whether Biblical events should be interpreted literally.  The two friends met on several occasions to discuss the basics of their faith, and in 1949, at a conference in the San Bernardino Mountains just east of Los Angeles, Templeton proposed a solution: they would attend seminary where they could study and resolve these questions.

Graham demurred, however, and went for a walk in the woods instead. Sitting on a rock in the dark of night, as he recalled in his memoirs, he prayed: “‘Father, I am going to accept this as Thy word—by faith! I’m going to allow faith to go beyond my intellectual questions and doubts, and I will believe this to be Your inspired Word.” He rose feeling renewed and empowered. Months later, the conversions of several Hollywood celebrities during the Los Angeles crusade campaign garnered front-page newspaper coverage across the United States. Graham became an international celebrity, and never looked back.

His friend Templeton, however, decided to bury himself in the books at Princeton Theological Seminary; while Graham had renewed his faith in the woods, Templeton attempted to recover his in the library. When he returned to evangelism in 1951, he eschewed the independent, personality-driven events of his friend, and instead worked closely with the mainstream National Council of Churches in the United States, and the United Church of Canada. When the attention of these churches turned, in the late 1950s, to the education and support of the thousands of new members they had taken in the previous decade, mass evangelism diminished in importance, and so too did Templeton’s ministry. His religious doubt returning, he left his former calling in 1956 and began a new career in journalism. In the years that followed, he and Graham remained friends, but with altogether different views about organized religion. In 1996, five years before he passed away, he wrote the book Farewell to God, criticizing the religion he once espoused: “I oppose the Christian Church because, for all the good it sometimes does, it presumes to speak in the name of God and to propound and advocate beliefs that are outdated, demonstrably untrue, and often, in their various manifestations, deleterious to individuals and to society.”

Meanwhile, Graham’s star continued to rise, and his public, individualistic Christianity became closely linked with American politics. Months after Graham’s breakthrough in Los Angeles, President Harry Truman invited the evangelist to a meeting; Graham would make very public visits, captured by the cameras, to the eleven Presidents who would follow. The relationship was mutually beneficial; Graham was given an opportunity to further his message of personal conversion, and the Presidents could benefit by association with “America’s pastor.” Indeed, Americans soon came to expect this alliance. Until Donald Trump—whose success lies in breaking, not honouring political conventions—a public declaration of faith was an unspoken requirement for a candidate for the Presidency of the United States. So too are photographs of the President and his “spiritual advisors” praying together in the Oval Office; this is one convention that President Trump has insisted on continuing.

In Canada, by contrast, we have preferred that our political leaders keep their beliefs to themselves. We are surprised to learn, for instance, of the regular attendance at Roman Catholic Mass of Pierre Trudeau. Canada’s more complicated religious history—including our colonial roots in both Roman Catholic France and Protestant Britain—is an important contributing factor. But so too is the absence of charismatic entrepreneurs in religion such as Billy Graham.