LETTERS TO THE EDITOR

Letters to the Editor, Sept. 20, 2018: Maclean's readers weigh in on asylum seekers, the slow death of rural Canada and why America needs to be invaded 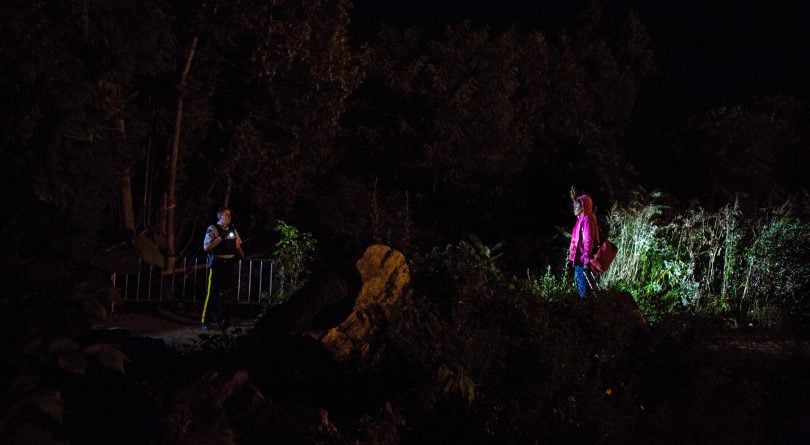 A woman originally from Haiti who has been living in the U.S. as an undocumented immigrant for several years prays under her breath as she raises her hands in front of a Canadian police officer before crossing illegally into Canada near Lacolle, Que. (Chris Donovan)

In August, Jason Markusoff wrote about a dramatic new poll that suggested most Canadians think securing the border is more important than helping migrants—and that the country can’t take any more refugees.

The migrant tide at our borders of “refugee” claimants and the evolution of how the population of Canada regards the claimants and what and whom we are prepared to accept and assist—all this needs to be revisited in terms of the reality of the situation. The migrant tide may indeed include some real refugees. These are people who are fleeing genuine threats to their existence—death and other severe penalties for cases that we in Canada consider to be unsuited to the perceived crime involved, for cases where the migrant has simply spoken out against a dictatorial leader and other cases such as medical problems for which treatment in their country has been refused or is not available. However, there is an increasingly obvious concern that the migrants not only include genuine refugees but also a category we might identify as opportunists. Many of these opportunists are simply looking for the better life that North America offers, and for which we have a structured administrative process to consider their suitability for acceptance to Canada. They have the resources to pay substantial amounts to traffickers to get them out of their countries and to travel around the United States to get to the Canadian border. The border must be shut down to this current flow until we get some new effective ways to help genuine refugees, some of whom may suffer in the interim. The blame for that would not lie in Canadian political orientations and pressure groups, but completely with the opportunist migrants and the traffickers who have made this abuse into a business.
—Robert Hay, Brownsburg-Chatham, Que.

The current influx of refugee claimants crossing the border is being driven by fear of a U.S. administration that appears to promote bigotry and intolerance on so many levels. Sadly, I am hearing that same bigotry and intolerance from a significant number of people here in Canada who are opposed to allowing these claimants into our country. Canada is an enormous, resource-rich, underpopulated country that should welcome legitimate claimants, however they arrive. Undoubtedly, there are a few that are gaming the system as has been the case with every major wave of asylum seekers. I believe that the vast majority simply want a safe place in which to live, be self-sufficient and contribute to their adopted country. I say it is in our best interests to make these people welcome.
—Diane C. Smith, Toronto

In August, Paul Wells wrote about the Conservative Party’s campaign manager for the next election, Hamish Marshall—and explained just how he hopes to topple Justin Trudeau’s Liberals.

Paul Wells is astute in his observation that Justin Trudeau and the Liberal party will be buoyed by comparison to the mess as presented by Donald Trump and his conservative cronies (“Operation topple Trudeau,” Politics, September 2018). Our government and its leader have been bashed, stepped on, humiliated and gutted by a right-wing ignorant despot who defies any resemblance to humaneness. (Case in point: the separation of children from their parents along its southern border.) Trudeau continues to shine on the world stage as he endeavours to improve things like race relations, gender equality, climate concerns, diversity. He attempts to get us where we need to be. We are nothing when we allow the perpetuation of suffering. Wells alludes to a powerful voting base as “male, over 35 . . . less well-educated . . . middle income . . . less likely to read newspapers, relatively more likely to worry about every dollar of household expenses.” This same voting base has been elevated by Trudeau’s substantial monetary support of children, and these same voters care that their children have a planet to inhabit. The conservatives do not convince us of this.
—Catherine Hammill, Kincardine, Ont.

I greatly enjoy reading Paul Wells, so I eagerly anticipated his pieces on the upcoming 2019 federal campaign and on Toronto Mayor John Tory (The Interview, September 2018). Unfortunately, the articles ignored the biggest factor in the next federal election and the biggest challenge facing the leader of Canada’s largest city. On the former, the failure to mention the New Democratic Party and Jagmeet Singh oversimplifies the challenges facing Andrew Scheer and the Tories, challenges since complicated by the defection of Maxime Bernier. To win in 2019, the Conservative party must both protect its right flank from the Bernier insurrectionists and hope that the New Democratic Party can capture a meaningful chunk of left and centre supporters of the Liberals. Focusing on a man-to-man struggle between Scheer and Justin Trudeau overlooks the subtleties of Canada’s electoral system. On the latter, doing a deep dive into the dynamics between the Ontario premier and the Toronto mayor might provide a short-term fix for political junkies, but doing a two-page spread on this matter while failing to mention gun control represents journalistic malpractice. What Toronto, and Canada, decide to do about guns matters much more than Premier Doug Ford’s petulant attempts at political payback.
—Mark S. Sternman, Somerville, Mass.

In August, Allen Abel wrote about the unapologetically left-wing Democratic candidates who hope to win their midterm elections and shake up Washington. Top of the list was Alexandria Ocasio-Cortez.

I was disappointed to read Allen Abel’s article on Alexandria Ocasio-Cortez. Even if one disagrees with Ocasio-Cortez’s platform, she should be commended for putting her name on a ballot, for defeating a 10-term congressman, for filling a concert hall in Kansas in the middle of the summer. We should be encouraging young people—particularly women—with bold ideas to get involved in politics. This article was instead dismissive and judgmental.
—Laura Smith, Ottawa

In July, Tabatha Southey wrote about an immigrant couple in Toronto who put up a sign offering their dry-cleaning services for people in need—and in their own way, put some good out into the world.

With far too many headlines and fake news telling us how miserable the world is, it was a pleasure to read this encouraging story of a generous couple’s contributions to making the world a better place. Even better that you did not shy away from acknowledging the positive influence their faith plays in motivating them to do so. I look forward to reading more of the same encouraging pieces in future editions!
—Jonathan Boone, Smithers, B.C.

In August, our editorial argued that Canada is one of the most socially mobile countries in the world, though challenges remain, of course.

The Duddy Kravitz piece should be mandatory reading in this country (“Kravitz’s curve,” Editorial, September 2018). We are so inundated with the bad, it’s refreshing to be leading the world in upward mobility. I am the living, breathing embodiment of this trend. An only child, I was born to a young mother who left an abusive husband when I was three. With no higher education and little savings, she worked 40 years and gave me a life. I graduated from the University of Toronto and went on to a highly successful career in publishing. I own my home and other real estate and have savings in the bank. I grew up in rentals with a bunch of kids from Flemingdon and Thorncliffe Parks in the ’70s and ’80s. We were mostly immigrants and none of our parents had money, yet all of us seemed to do well. The odds were in our favour because of this wonderful country we live in.
—Dawn Dickinson, Toronto

In August, Aaron Hutchins reported from the Prairies on many of the chronic challenges facing rural Canada, including opioid abuse, boarded-up businesses and fleeing populations.

I read the article on the decline of small towns and I have a solution: move the refugee families out of large urban centres to small towns. A few families in each town can change things for everyone, the urban centres won’t be as overwhelmed—the refugee families can’t afford the cost of living there anyway—and the small towns need the population and probably have empty buildings in which to house them. Historically, immigrants brought with them the drive to succeed and many opened stores or restaurants.
—Karin Drummond, St. Catharines, Ont.

In July, Anne Kingston wrote an obituary for Kate McInturff, a beloved economist who fought for gender equality by harnessing big data.

Anne Kingston’s piece about the late financial analyst Kate McInturff was an exciting read for me. She asked questions I too feel our government is completely missing. Despite the Liberal government’s focus on equality for women, McInturff realized that we are still not where we should be in realizing the contributions women make. Our daycare is not what has been promised for so many years. And women are penalized in their retirement years—for the time they’ve needed to take looking after kids, parents and disabled family members—by a pension so paltry that it is completely unlivable. This should be a national scandal. Especially since figures show that the largest-growing group now accessing food banks is senior women. If the government wishes to address the equality of women, why isn’t it even discussing this issue? It’s a question that McInturff also thought important. Sadly, she is no longer here to crunch the numbers and prove to us what a serious lapse this is for both the equality this government is aiming at and as a big factor in a balanced economy.
—M. Schooff, Chatham, Ont.

In July, John Geddes and Shannon Proudfoot detailed all the ways Canadians were fighting back against U.S. President Donald Trump’s constant threats of tariffs and trade wars.

Your fine review of what ordinary Canadians can do about the disputes over trade with our southern neighbour reminded me of our recent interaction with an American organization. My wife and I, as members of the American Contract Bridge League, got an email invitation to a big tournament in Houston. In a foul mood (probably because of my poor performance at the bridge table), my wife replied that for the foreseeable future, we would be confining our bridge playing to Canadian clubs and tournaments and not supporting the American tourism industry. A surprising, almost immediate reply showed up in her inbox: “I don’t blame you.” Small moves add up to big changes.
—Cam Ghent, Ottawa

In June, as Trump levelled threats against Canada and the cross-border relationship soured, Scott Gilmore made the case for invading the world’s most powerful nation.

A word of thanks and gratitude to Canadians thinking about invading the U.S. We Democrats need all the help you can offer. I now have family living in Canada, and if I could leave the U.S., I would. As a representative of the millions who support our ally, Canada, I pass on our thanks that you have not given up on the American Democrats who do not accept Trump as president. Right on, Canada!
—Suzette Spanhel, Driftwood, Tex.