If Spain wants to lose Catalonia, it will keep up its brutality 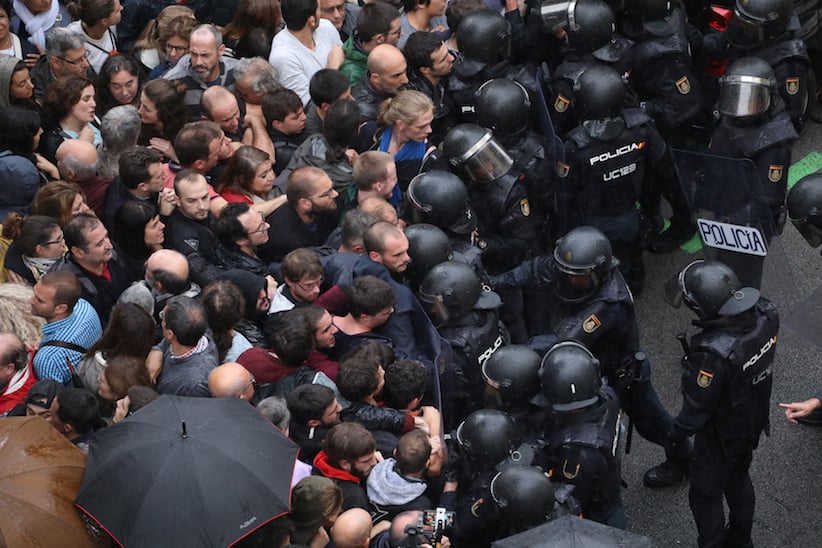 Riot police face off with demonstrators outside a polling station for the banned independence referendum in Barcelona, Spain, October 1, 2017. (Susana Vera/Reuters)

The heartrending images shot through social media on a mostly quiet Sunday: Catalonia, the wealthy, Belgium-sized region of Spain that has long sought its independence, went to the polls to vote on its latest referendum and found themselves rebuffed by Spanish police officers, often violently. Catalan police and firefighters were forced into the impossible situation of tearfully defending Catalans from the assaults of Spanish police. Clubs and rubber bullets flew at citizens both young and old, whose greatest threats were the ballots they brandished.

WATCH: Over 760 injured by police in Catalonia

Sure, the courts had ruled that the vote was illegal, and police are responsible for enforcing the law. And the vote itself was a mess; the electoral commission responsible for overseeing it was dissolved the week prior, and the shape of the referendum question—it sought to immediately create an independent state if it earned a plurality of the vote, with no turnout minimum—was reckless. But none of this constitutes an excuse for police violence—especially given the fact that this was just the cherry atop months of subtler overreach from Prime Minister Mariano Rajoy’s government, ranging from attacks on freedom of expression (confiscating pro-independence posters and leaflets, stopping a Catalan parliamentarian’s speech) and forced entry into political headquarters looking for “evidence of support by the regional government for the October 1 independence referendum,” to implausible raids (busting into printing companies to see if they were holding ballots and ballot boxes as if they were drug shipments) and proclaiming that referenda, a fairly standard protocol of democracies around the world, are a “weapon of choice of dictators.” And Spanish leaders have yet to show meaningful contrition for the police’s dramatic overstep of their authority.

Never mind that many dictatorships often emerge from trickery around a country’s constitution, allowing oppression to become codified, similar to how Spain established itself as “indissoluble” in 1978, the government’s our-hands-are-tied argument for its rejection of the referendum. Never mind that we won’t know what it would have looked like if Spain had actually engaged in the debate to make a case for why Catalonia should stay. Never mind that the Spanish government was so afraid of the referendum defying the country’s rule of law that it went ahead and violated it themselves, or even that the Rajoy government could’ve just simply (and rightly) dismissed the vote as they did as recently as 2014. No: The Catalonia incident merely serves as a brutal reminder that governments around the world simply do not learn lessons from the past. Harshly tamping down protest movements may work in the short term, and it certainly is easy to abuse your power—but in the long run, blunt-force oppression often achieves precisely what the government doesn’t want.

It’s more of the rule, and not the exception; people, when faced by a clearly vicious government crackdown, are rarely cowed, and instead double down on their beliefs, or are swayed to action. In Ukraine, violent attempts to quash protests in the Maidan in 2014 only inspired more protesters to come out, sustaining rather than snuffing out the movement, and the Yanukovych government was toppled two months later. Amid violence against largely peaceful demonstrations in Tunisia in 2011, the national organizations for lawyers and teachers went on strike to oppose the beating of their constituencies; the Tunisian president Ben Ali fled the country a few days afterward. In Poland in the 1980s, efforts to persecute the independent trade union Solidarity only steeled its members’ will, and in less than a decade of strikes and demonstrations and even a period of martial law, the Polish United Workers’ Party would fall in the country’s first partially democratic parliamentary election. It happened in Myanmar, formerly Burma, when the military junta imprisoned pro-democracy protesters and made a hero out of an academic named Aung San Suu Kyi. The same thing happened when South Africa jailed a lawyer named Nelson Mandela and when Czechoslovakia’s communist invaders made a freedom fighter out of a playwright named Vaclav Havel.

“We never decided to become dissidents,” Havel—who would go on to become the Czech Republic’s first president—wrote in 1979. “We have been transformed into them, without quite knowing how, sometimes we have ended up in prison without precisely knowing how. We simply went ahead and did certain things that we felt we ought to do, and that seemed to us decent to do, nothing more nor less.” These draconian crackdowns, that turn complicated issues into digestible matters of right and wrong, is just the thing that Havel is referring to, the spell that transforms the apathetic into dissidents. Independence, freedom, democracy—these are, after all, hard, big, complicated things. Government overreach and blood in the streets—these are the things that inflame the spirit or, as it was called it in an article published in Nature Human Behaviour Journal, “sacred values,” the things that people are willing to sacrifice themselves for. And another study published in the Journal of Personality found that people who make the political personal—who develop a stake in the issues at play—are more likely to engage in political activism.

MORE: How not to deal with separatists

It’s even already happening in Catalonia. Even though exit polls suggested there wasn’t likely to be a decisive result from the referendum—and one major one suggested the vote would fail—the ultimate result speaks for itself: more than 90 per cent of those who voted—with a low 42-per-cent turnout, of course—voted yes on the question, “Do you want Catalonia to become an independent state in the form of a republic?” And it has already dramatically raised the stakes for people who would otherwise feel comfortable in their political apathy, sending Catalans into the arms of the secessionists. “I felt so angry and hurt inside that I thought, ‘A country that hits me wants me to stay? You don’t listen to me and on top of it you hit me?’ For me that is abuse,” Catalan teacher Elisa Aroca told the Associated Press, who had planned to vote against independence but changed her mind after the police crackdowns. “I forgot about independence,” echoed Barcelona salesman Jordi Borrell Celades in an op-ed in the Guardian. “…[But] I feel that Spain has betrayed me as a citizen, using violence against my freedom of thought and expression.” 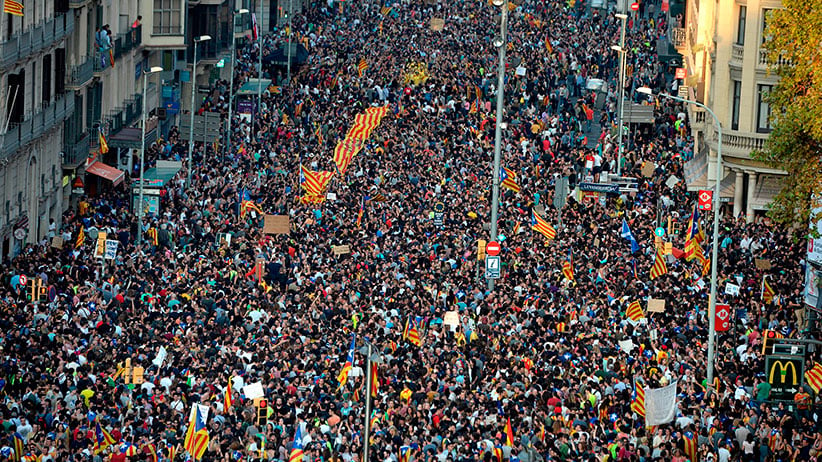 Protesters demonstrate at the Placa de la Universitat square in Barcelona during a general strike in Catalonia called by Catalan unions on October 3, 2017. (Josep Lago/AFP/Getty Images)

It is not always the case that crackdowns will only fuel the opposition. Tiananmen Square lives on as one of democracy’s grimmest days. In Turkey, despite Recep Tayyip Erdogan’s proclamation that democracy has “no value,” he remains comfortable as the country’s president, despite an attempted coup. And in Latin America, revolutions can fuel military crackdowns that fuel more violent revolutions and ever more vicious crackdowns, and the ultimate imbalance of power can lead to the kinds of genocides we’ve seen in Guatemala. By and large, the thing that unites these exceptions to the rule is a failure of the international community to stand up for the dissident groups in question—and given the European Union’s support of the Rajoy government, with the European Parliament’s vice-president going as far as to call the vote a “coup”, that risks being the case here.

The best solution now, frankly, is more democracy—a legal vote, debated by all in Spain. To his credit, the Catalan regional president Carles Puigdemont initially asked only for international mediation, not aggressive departure, with its semi-mandate; the Catalans have earned at least that. It appears they are now set to declare independence, however, which could prompt Spain’s government to invoke a clause to take over the regional government and send the civil guard in to take to the streets. If things seemed inconvenient before the vote, things are even worse now—and if Rajoy wants to lose this fight, the most brutal form of this tactic is the one he will take.

After all, it may not come now—and it may not even come soon—but there’s not much a government can do to more reliably produce the opposite result of what it wants than by deploying visible and draconian tactics of oppression.