In defence of WE

Scott Gilmore: Get angry about why the Kielburgers needed to cultivate influence in Canada, not at the fact they were good at it 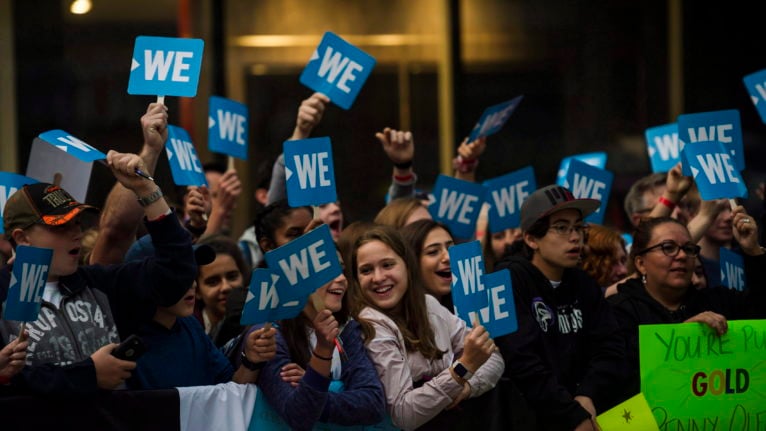 A crowd gathers before the WE Day event in Toronto, on Sept. 20, 2018 (CP/Christopher Katsarov)

I am one of the last people you would expect to write a defence of the Kielburgers and their WE movement. I don’t like what they do, and being highly suspicious of all charismatic movements, I wouldn’t cross the room to say hello (in fact, on many occasions I haven’t). But, watching politicians and journalists pile on, breathlessly gasping with outrage at one irrelevant or meaningless revelation after another, I need to speak up.

A long time ago, I left the foreign service to launch my own charity, one that has broadly similar goals as the Kielburgers’—which boil down to “fight poverty.” I no longer run that organization, and I recently retired from the board, because founders have a shelf-life, and I was well past mine. Nonetheless, for over a decade the Kielburgers and I operated in similar countries, shared the same donors, attended the same meetings as we both tried to survive and do some good. Which is all to say, I know their business fairly well.

My first point of defence is for the critics who are scandalized at the masterful way they have cultivated influence in Canada, by giving the Prime Minister’s wife a podcast, for example. You should be angry at why they needed to do that, not at the fact they were good at it.

Most charitable organizations will tell you that dealing with the Canadian government is a nightmare. The bureaucracy is impenetrable—finding a contact point is an exercise in Kremlinology. They take decisions at a geological pace—they once asked my organization to immediately deploy an “emergency” program in the Middle East. It then took them two years to complete their approval process. And, once you do take their money, it will require more paperwork, reporting, reviews and audits than anything Kafka could have imagined.

There’s a reason so many Canadian-based overseas charities are headquartered in Ottawa. In order to get anything done you need staff who can navigate the byzantine bureaucracy, ideally former civil servants. Not coincidentally, many international aid organizations refuse to even do business with Canada. (Including mine, which eventually moved to the United States.)

READ MORE: Barbados is welcoming telecommuters, why can’t we?

The only possible way to cut through this mess is to get the eye of a Minister, or better yet the Prime Minister. And almost all Canadian charities work extremely hard to do so, by taking Members of Parliament overseas on aid junkets, for example, or giving a spouse a podcast. If you don’t like that, don’t blame the charities—blame the politicians and officials who over the years created the bureaucratic mess that made this type of extravagant lobbying necessary.

The second point I need to make in the Kielburgers’ defence is that they should be judged primarily by what they achieve, not how they run their organization. WE explains its goal is to “improve the lives of children and their families through holistic development programs that address issues of poverty and exploitation around the world, and to promote student service-learning at home.” The most important question to ask is do they achieve it? It really doesn’t matter how much real estate they own or how flimsy their board may be. Donors (including taxpayers via the Canadian government) are ultimately buying impact, not process. Or, at least, that is the one thing they should overwhelmingly be focused on.

As an aside, it is on this point where the Kielburgers and I are most at odds. I believe, based on mountains of economic data and research, that the most efficient way to fight poverty anywhere is to create jobs. And, the most efficient way to create those jobs is to help small businesses (which are responsible for over 80 per cent of all new jobs in most economies). In contrast, the Kielburgers believe providing social services in villages, organizing voluntourism to Africa, and hosting student rallies in Canada is a more powerful tool. As I said above, we do not see eye to eye.

My point is, in the case of this current hullabaloo, we should focus on whether the Kielburgers’ charity would have provided good value for money executing the student grant program.* The experts’ consensus seems to be no, but it’s hard to judge without better understanding the other options. Even then, I remain unconvinced the government can best fight a recession by paying students less-than-minimum wage for volunteer work. This feels like putting oversized novelty boxing gloves on Adam Smith’s invisible hands, then expecting them to perform emergency surgery.

Canadians dislike tall poppies, and there are no more conspicuous targets than Marc and Craig Kielburger. I suspect it’s their relentless cheerfulness, and the way they whip up a cloying meringue of empathy with an almost religious fervor, that has turned the public mood against them. Or, I may just be projecting. Regardless, even the most jaded and cynical among us (I’m looking in the mirror here) should admire them for trying so passionately to do good, and for dedicating their lives towards that goal. They are not being accused of doing anything even remotely illegal, not even of bending any rules. Their efforts to curry favour with all political parties is sadly necessary, and not a unique tactic. If we really want to put them in the spotlight, it should only be to judge how well they deliver value for money, in their work overseas and in their work at home. Everything else is just a pointless mobbing.